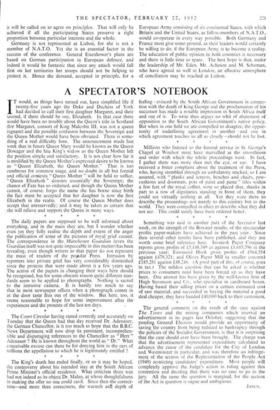 The King's death has ended finally, or so it may

be hoped, the cont.toversy about his intended stay at the South African Prime Minister's official residence. What criticism there was had not indeed as its object Dr. Malan, at whose thoughtfulness in making the offer no one could cavil. Since then the correct- ness—and more than correctness, the warmth an depth of feeling—evinced by the South African Government in connec- tion with the death of King George and the proclamation of his successor has made a notable impression in South Africa itself and out of it. To write thus argues no whit of abatement of opposition to the South African Government's native policy. But when in one field we are compelled to disagree, the oppor- tunity of underlining agreement in another--and one in which agreement touches us all so closely—should not be lost.