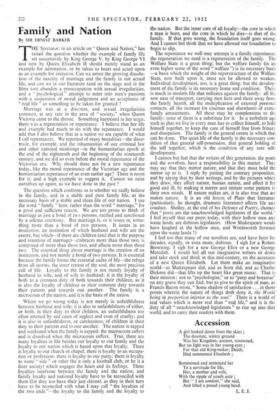 T_ HE Spectator, in an article on " Queen and Nation," has raised the question whether the example of family life set successively by King George V, by King George VI and now by Queen Elizabeth II should merely stand as an example for admiration, or be taken to heart and acted upon as an example for imitation. Can we arrest the growing dissolu- tion of the sanctity of marriage and the family in our actual life, and can we in our literature (and on the stage and in the films too) abandon a preoccupation with sexual irregularities, and a " psychological " attempt to enter into men's passions with a suspension of moral judgement and an acceptance of ' real life " as something to be taken for granted ?

Marriage was at a discount, and sexual irregularities common, at any rate in the area of " society," when Queen Victoria came to the throne. Something happened in her reign; there was a regeneration or repentance. I believe that her life and example had much to do with the repentance. I would add that 1 also believe that as a nation we are capable of what I call repentances. We repented of many brutalities—the slave- trade, for example, and the inhumanities of our criminal law and other national misdoings—in the humanitarian epoch at the end of the eighteenth and the beginning of the nineteenth century, and we did so even before the moral repentance of the Victorian era. Why should there not be a new repentance today, like the moral repentance of the Victorian age and the humanitarian repentance of an even earlier age? There is room for it, and a high example to suggest it. Cannot we raise ourselves up again, as we have done in the past ?

The question which confronts us is whether we really believe in the family, and in a stable and pure family life, as the necessary basis of a stable and clean life of our nation. I use the word " family " here, rather than the word " marriage," for a good and sufficient reason. We are too prone to think of marriage as just a bond of two persons, ratified and sanctioned by a solemn ceremony. But marriage is, or it issues in, some- thing more than a bond of two persons. It issues in an institution, an institution of which husband and wife are the centre, but which—if there are children (and that is the purpose and intention of marriage)—embraces more than those two, is composed of more than those two, and affects more than those two. The essential thing about marriage is the creation of an institution, and not merely a bond of two persons. It is essential because the family forms the essential cadre of life—the refuge from all storms, the inner retreat of the soul, the most precious cell of life. Loyalty to the family is not merely loyalty of husband to wife, and of wife to husband; it is the loyalty of both to a common duty of both towards their children, as it is also the loyalty of children to their common duty towards their parents and towards one another. The family is a microcosm of the nation, and it is the basis of the nation.

Where we go wrong today is not merely in unfaithfulness between husband and wife; it is also in unfaithfulness of either, or both, in their duty to their children, an unfaithfulness too often attested by sad cases of neglect and even of cruelty; and it is also in unfaithfulness, or carelessness, of children in their duty to their parents and to one another. The nation is sapped and weakened when the family is sapped; the macrocosm suffers and is dissolved when the microcosm suffers. True, there are many loyalties in life besides our loyalty to our family and the loyalty to our nation which is based upon that loyalty. There is loyalty to our church or chapel; there is loyalty to an occupa- tion or profession; there is loyalty to our party; there is loyalty to some " side " or other (be it only a football club, or be it a finer society) which engages the heart and its feelings. These loyalties intervene between the family and the nation; and family loyalty and national loyalty have to be reconciled with them (for they too have their just claims), as they in their -turn have to be reconciled with what I may call " the loyalties of the two ends "—the loyalty to the family and the loyalty to the nation. But the inner core of all loyalty—the core in which a man is born, and the core in which he dies—is that. of the family. If that goes wrong, the foundation itself goes wrong. And I cannot but think that we have allowed our foundation to begin to slip.

The repentance we well may attempt is a family repentance; the regeneration we need is a regeneration of the family. The Welfare State is a great thing; but the welfare family (in an even higher sense of the word " welfare ") is its necessary basis —a basis which the weight of the superstructure of the Welfare State, now built upon it, must not be allowed to weaken. Individual development, too, is a great thing; but the develop- ment of the family is its necessary home and condition. There is much in modern life that militates against the family : all the new ease of transport, carrying men here and-there away from the family hearth, all the multiplication of external personal contacts, all the increase (in cinemas and elsewhere) of extra- family amusements. All these may be complements to the family; none of them is a substitute for it. In a turbulent age such as that we live in every man has to collect himself, to hold himself together, to keep the core of himself free from frittery and dissipation. The family is the general centre in which that can be done. The quiet life of the family is the necessary con- dition of that general self-possession, that general holding of the self together, which is the condition of any sure self- development.

I cannot but feel that the writers of this generation, the poets and the novelists, have a responsibility in this matter. They may say that they mirror nature, and that they must hold the mirror up to it. I reply by putting the contrary proposition, and by saying that by their writings, and by the pictures which they draw, they affect nature, human nature, and affect it for good and ill, by making it mirror and imitate some pattern in their own minds. If nature makes art, it is also true that art makes nature. It is an old lesson of Plato that literature (particularly, he thought, dramatic literature) affects life and conduct. Shelley, at the end of his Defence of Poetry, claimed thai " poets are the unacknowledged legislators of the world." I feel myself that our poets today, with their hollow men and waste lands, are dubious legislators. (How Shakespeare would have laughed at the hollow men, and Wordsworth frowned upon the waste lands !) I feel too that many of our novelists are, and have been for decades, equally, or even more, dubious. I sigh for a Robert Browning; I sigh for a new George Eliot or a new George Meredith. I would bid all our imaginative writers sit down and take stock and think in this mid-century, on the accession of a new Queen Elizabeth. Let them make an imaginative world—as Shakespeare did, and as Scott did, and as Charles Dickens did—that lifts up the heart like great music. That is their mission: not to "psychologise," or to "peep and botanise" on any grave they can find, but to give to the spirit of man, as Francis Bacon wrote, " Some shadow of satisfaction ... in those points wherein the nature of things doth deny it, the World being in proportion inferior to the soul." There is a world of real values which is more real than " real life," and it is the duty of all " unacknowledged legislators" to rise up into that world, and to carry their readers with them.