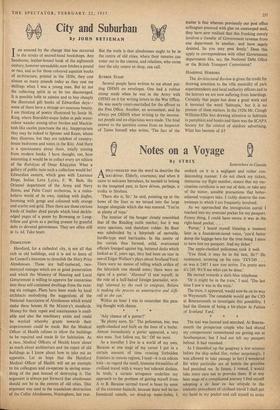 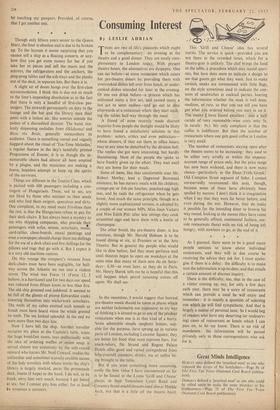 Notes on a Voyage

By STRIX Somewhere in Canada APPLE-CHEEKED was the word to describe the taxi-driver. Elderly, courteous, and when it came to suitcases herculean, he seemed to belong to the imagined past, to have driven, perhaps, a troika in Strelsau.

'There she is, Sir,' he said, pointing up at the bows of the liner as we turned into the large hangar alongside which she was moored. 'You're in plenty of time.'

The interior of the hangar closely resembled that of the Reading cattle market; but it was more spacious, and therefore colder. Its floor was subdivided by a labyrinth of movable, hurdle-type steel barricades. In the centre of the corrals thus formed, solid, overcoated officials lounged against big, battered desks which looked as if, years ago, they had been on tour in one of Edgar Wallace's plays about Scotland Yard. There were no means of telling which orifice of the labyrinth one should enter; there were no signs of a porter. 'Alarmed' (I saw myself, in the role of a half-baked foreign journalist, writ- ing) 'alarmed by the rush to emigrate, Britain is making the process as unattractive and diffi- cult as she can.'

Within an hour I was to remember this pass- ing thought with shame.

`Any chance of a porter?'

'Be plenty soon, Sir.' The policeman, too, was apple-cheeked and built on the lines of a butler. Almost immediately a porter appeared, a very nice man. 'Just follow me, Sir.' Off we went.

As a traveller .1 live in a world of my own. Because at one stage of my career I put in a certain amount of time crossing forbidden frontiers in remote regions, I tend—it is an odious trait—to regard the small, tiresome formalities of civilised travel with a weary but tolerant disdain. In truth, a certain arrogance underlies my approach to the problem of getting myself from A to B. Because normal travel is beset by none of the extremer hazards, because there will be no • foundered camels, no dried-up water-holes, I , embark on it in a negligent and rather con- descending manner. I do not check my tickets, memorise my flight number, ensure that my vac- cination certificate is not out of date, or take any of the minor, sensible precautions that better- adjusted voyagers take. I richly deserve the con- tretemps in which I am frequently involved.

As we approached the immigration corral I reached into my overcoat pocket for my passport. Funny thing, I could have sworn it was in the right-hand pocket. . . .

'Porter,' 1 heard myself bleating a moment later in a foundered-camel voice, 'you'd better dump the luggage here for the time being. I seem to have lost my passport. And my ticket.'

The apple-cheeked policeman took it well.

He moved towards a dark-blue telephone.

The train, it appeared, would now be on its way to Weymouth. The constable would get the CID at Bournemouth to investigate this possibility. I had the illusion of being a bit-player in Fabian of Scotland Yard.

The taxi was located and searched. At Bourne- mouth the prosperous couple who had shared my compartment remembered me getting out at Southampton; but I had not left my passport behind. It had vanished.

As I shambled up the gangway a few minutes before the ship sailed (for, rather surprisingly, was allowed to take passage in her) I wondered for what particular act of hubris the gremlins had punished me. In future, I vowed, I would take more care not to provoke them. If at any later stage of a complicated journey I find myself adopting a de haul en bas attitude to the unexotic procedures of civilised travel I shall put my hand in my pocket and call myself to order by touching my passport. Provided, of course, that I get another one.

* * * Though only fifteen years senior to the Queen Mary, the liner is obsolete and is due to be broken up. To the layman it seems surprising that you cannot sell a ship as a floating concern, or any- how that you get more money for her if you take her to pieces and sell the masts and the mirrors, the refrigerators and the anchors, the ping-pong tables and the ash-trays and the planks out of the deck, in separate lots. But there it is.

A slight air of doom hangs over the first-class accommodation. I think this is due not so much to the liner's impending dissolution as to the fact that there is only a handful of first-class pas- sengers. The stewards permanently on duty in the lounge and the bar and the library man their posts with a listless air, like sentries outside the palace of a discredited dictator. The band, tire- lessly dispensing melodies from Oklahoma! and Bless the Bride, generally outnumbers its audience. There is something unreal and vaguely haggard about the ritual of 'Tea-Time Melodies,' a regular feature in the day's tastefully printed Programme of Events; it is as though the in- numerable chairs had almost all been emptied by a plague, and the musicians are making a brave, hopeless attempt to keep up the spirits of the survivors.

Things are different in the Tourist Class, which is packed with 600 passengers including a con- tingent of Hungarians. These, sad to say, are not liked by those who minister to their needs and who find them exigent, querulous and dirty. One complaint, to my mind more frivolous than the rest, is that the Hungarians refuse to pay for their deck-chairs. It has always been a mystery to me why shipping companies, who provide their passengers with sofas, settees, armchairs, music, card-tables, chess-boards, mural paintings and even a newspaper,should charge them ten shillings for the use of a deck-chair and five shillings for the pillows and rugs that go with it. But I expect it is a very old maritime custom.

On this voyage the company's revenue from deck-chairs must have been negligible, for half- way across the Atlantic we ran into a violent storm. The wind was Force 11 (Force 12, I believe, is a hurricane) and for two days our speed was reduced from fifteen knots 'to less than five. The old ship groaned and juddered. It seemed to be full of the ghosts of plump Edwardian cooks lowering themselves into wickerwork armchairs. The walls of my cabin emitted such sounds as Jonah must have heard when the whale ground its teeth. The sea looked splendid. In the end we were more than two days late.

Now I have left the ship. Another traveller occupies my place at the Captain's table, scans the huge breakfast menu, toys ineffectually with the idea of ordering waffles or onion soup, is served almost too attentively by the soft-voiced steward who knows Mr, Noel Coward, studies the unfamiliar and sometimes scarcely credible names of the lady novelists with whose works the ship's library is largely stocked, paces the promenade deck, listens (I hope) to the band. I do not, to be frank, envy him very much, because I get bored at sea; but I cannot pity him. either, for at least.' be nossesses a passport.