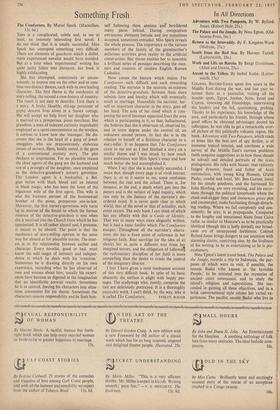 The Comforters. By Muriel Spark. (Macmillan, 13s. 6d.) THIS is a complicated, subtle and, to me at least, an intensely interesting first novel. I do not think that it is totally successful. Miss Spark has attempted something very difficult. There are elements of gaucherie which a duller, more experienced novelist would have avoided. But at a time when 'experimental' writing has quite justly fallen into disrepute, her book is highly exhilarating.

She .has attempted, consciously or uncon- sciously, to impose one on the other and to com- bine two distinct themes, each with its own leading character. The first theme is the mechanics of story-telling, the second a case-history of insanity. The result is not easy to describe. First there is a story. A lively, likeable, old-age pensioner of gypsy descent lives alone in a Sussex cottage. She will accept no help from her daughter who is married to a prosperous, pious merchant. Her grandson, a man of indecent curiosity improbably employed as a sport-commentator on the wireless, is curious to know how she 'manages.' He dis- covers that she is the head of a gang of jewel- smugglers who use preposterously elaborate means of secrecy. Here, baldly stated, is the germ of a conventional mystery story. The plot thickens to inspissation. For no plausible reason the chief agents of the gang are the husband and son of a protegde of the daughter, once employed as the detective-grandson's nursery governess. The London agent is, a bookseller, a Bel- gian baron with black blood and an interest, in black magic, who has been the lover of the bigamous wife of the first agent. This wife is also the business partner of the homosexual brother of the pious, prosperous son-in-law. Moreover, the first nursery-governess wife turns up as matron of the hostel to which the former mistress of the detective-grandson is sent when she is received into the Church from which he has apostatised. It is all rather absurd and, I presume, is meant to be absurd. The point is that the mechanics of story-telling operate in the same way for absurd as for plausible stories. The inter- est is in the relationship between author and character. Every novelist, good or bad, must know the odd stages of intimacy and indepen- dence in which he deals with his 'creations.' Sometimes he is drawing directly on his own experience, recording what he has observed of men and women about him; usually his experi- ences have become so digested in the imagination that no identifiable portrait results. Sometimes he is in control, forcing his characters into situa- tions convenient for his theme. Sometimes the characters assume responsibility and he finds him- im- self following them anxious and bewildered many paces behind. -During composition extraneous elements intrude and are sometimes accepted, sometimes extruded. Miss Spark reveals the whole process. The importance to the various members of the family of the grandtriother's nefarious activities gives reality to the artificial construction. Her theme enables her to assemble a brilliant series of passages describing the man- ners and customs of modern English Roman Catholics.

Now comes the feature which makes The Comforters such difficult and such rewarding reading. The narrator is the neurotic ex-mistress of the detective-grandson. Between them there subsists love and loyalty which will eventually result in marriage. Meanwhile the narrator, her- self an important character in the story, goes off her head. The area of her mind which is com- posing the novel becomes separated from the area which is participating in it, so that, hallucinated, she believes that she is observant of, observed by, and in some degree under the control of, an unknown second person. In fact she is in the relation to herself of a fictitious character to a story-teller.. It so happens that The Comforters came to me just as I had finished a story on a similar theme and I was struck by how much more ambitious was Miss Spark's essay and how much better she had accomplished it.

When I say that she is not totally successful, I mean that, though every page is of vivid interest, there is, or so it seems to me, some confusion between the real and the actual. There is, for instance, at the end, a death which gets into the papers and is the subject of legal inquiry, which can only be the fantasy of the narrator's dis- ordered mind. It is never quite clear in which World, that of the novel or that of actuality, each event occurs. The only book I can think of which has any affinity with this is Cards of Identity. That was in many ways more elegantly written, but it had a basic futility which The Comforters escapes. Throughout all the narrator's aberra- tions she has a fixed point of reference in her religious faith. Real sacrilege (or the idea of it) shocks her in quite a different way from he imagined terrors, and the obligation of followinl the rudimentary discipline of her faith is more compelling than the desire to evade the control of the imaginary director.

I fear I have given a most inadequate account of this very difficult book. In spite of its basic obscurity the surface is alight with happy pas- sages. The scallywags who, mostly, comprise the cast are deliciously portrayed. It is a thoroughly enjoyable work. I can't think, by the way, why it

is called The Comforters. EVELYN WAUGH