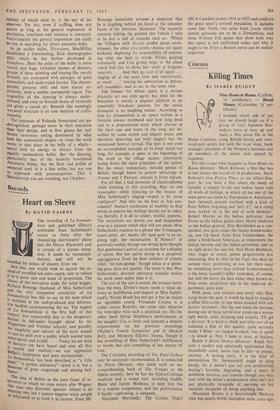 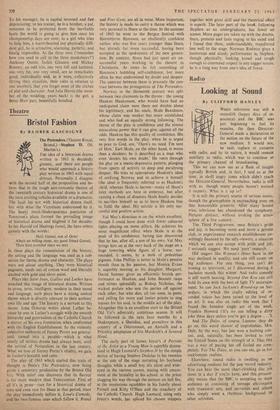 For this is just what happens in Nine Hours to Rama (director : Mark Robson), a film that has at last beaten the record of its predecessor, Mark Robson's own Peyton Place, as my silliest-film- ever. So you have a film about the death of Gandhi, a subject to stir any Indian heart with all kinds of feelings, in which all but one of the main parts are taken by Europeans or Americans, their (several) accents overlaid with a kind of Peter Sellers sing-song and 'isn't it?,' on a rising note, tacked on to the end of each sentence: Robert Morley as the Indian politician, Jose Ferrer as the Indian police chief, Harry Andrews as the Indian general, Don Borishenko as a con- spirator, two girls, under the faintly brown make- up, one. I'd swear from East Twickenham, the other a fresh-faced American, as respectively the Indian heroine and the Indian prostitute; and so on right down the cast list. And Horst Buchholz, who, tragic or comic, grows progressively less interesting, film by film (in his Tiger Bay days he seemed more promising, as one felt there must be something more than stylised handsomeness), is the hero, Gandhi's killer (mistaken, of course, but still the hero), his face either deep brown or, from some mysterious slip in the make-up de- partment, quite pale.

With paste and scissors and every silly film- script from the past, it would be hard to imagine a sillier film-script, or one more studded with col- lectors' moments: like the one when the heroine, during one of those torrid lave scenes on a moon- light beach, cries, dripping and ecstatic, 'I'll get a divorce.' It is hard to think just what sort of an audience a film of this quality, quite seriously made, I think—no tongue-in-cheek, lots of uplift —is aimed at. Not, I hope at least, at Indians.

Beside it Blood Money (director: Ralph Nel- son), a modest and admittedly sentimental film, beautifully acted, seems true to life—to people, anyway. A boxing story, it is the kind of ammunition Dr. Summerskill ought to keep handy, for it doesn't just tell you professional boxing's horrible, degrading, and a mess, it somehow involves you (remote though you may feel) with the boxer's predicament when he's not just physically incapable of carrying on but mentally incapable of doing anything else.

Mountain Rivera is a heavyweight Mexican who was nearly world champion some years ago,

To his manager, he is capital invested and fast depreciating; to his trainer, he is a brother, a pal, someone to be protected from the inevitable hurts the world is going to give him once his championship days are over; to a girl who tries to help him, a warm-hearted but physically diffi- dent girl, he is attractive, alarming, pathetic, and finally impossible. As the three men ('remember how you used to call us the three musketeers?') Anthony Quinn, Jackie Gleason and Mickey Rooney, an odd trio, one very tall and battered, one very fat, one very small, are so remarkably good, individually and, as it were, collectively (fitting their situation, their roles in relation to one-another), that you forget most of the cliches of plot and character. And Julie Harris (the mem- ber of the wedding, years back) is the girl, a Betsy Blair part, beautifully handled.