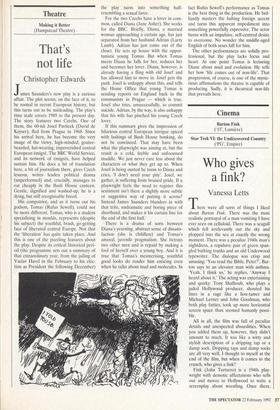 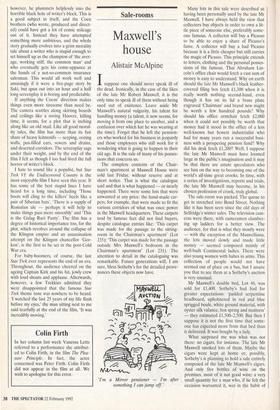 Who gives a fink?

There were all sorts of things I liked about Barton Fink. There was the most realistic portrayal of a man vomiting I have ever seen on celluloid. There was a seagull which fell irrelevantly out the sky and plopped into the sea at exactly the wrong moment. There was a peculiar 1940s man's nightdress, a repulsive pair of green span- gled bathing trunks and an old Underwood typewriter. The dialogue was crisp and amusing: 'You read the Bible, Peter?', Bar- ton says to an elevator man with asthma. `Yeah, I think so,' he replies, 'Anyway I heard about it.' The acting was entertaining and quirky: Tony Shalhoub, who plays a jaded Hollywood producer, shouted his lines in a rage like a lion-tamer and Michael Lerner and John Goodman, who both play fatties, took up more horizontal screen space than seemed humanly possi- ble.

All in all, the film was full of peculiar details and unexpected absurdities. When you added them up, however, they didn't amount to much. It was like a witty and stylish description of a dripping tap or a damp sock. Dripping taps and damp socks are all very well, I thought to myself at the end of the film, but when it comes to the crunch, who gives a fink?

Fink (John Turturro) is a 1940s play- wright with demotic affectations who sells out and moves to Hollywood to write a screenplay about wrestling. Once there, however, he plummets helplessly into the horrible black hole of writer's block. This is a good subject in itself, and the Coen brothers (who wrote, produced and direct- ed) could have got a lot of comic mileage out of it. Instead they have attempted something more ambitious, and the whole story gradually evolves into a grim morality tale about a writer who is stupid enough to set himself up as the champion of 'the aver- age, working stiff, the common man' and who eventually gets his come-uppance at the hands of a not-so-common insurance salesman. This would all work well and amusingly if it were a five-page story by Saki, but spun out into an hour and a half long screenplay it is boring and predictable.

If anything the Coens' direction makes things even more tiresome than need be. The camera scuttles along skirting boards and ceilings like a roving Hoover, killing time, it seems, for a plot that is inching along like an old snail. Like all good moral- ity tales, the film has more than its fair share of heavy leitmotifs — seeping, oozing walls, pus-filled ears, sewers and drains, and deserted corridors. The screenplay sags under their weight, and by the end of the film I felt as though I too had lived the full horror of writer's block.

I hate to sound like a populist, but Star Trek VI: the Undiscovered Country is the most enjoyable film I have seen this year. It has some of the best stupid lines I have heard for a long time, including 'Those boots will cling to the killers' heels like a pair of Siberian hats', 'There is a supply of Romulan ale — perhaps it will help to make things pass more smoothly' and 'This is the Gulag Ruri Panty'. The film has a degree of historical importance too, for the plot, which revolves around the collapse of the Klingon empire and an assassination attempt on the Klingon chancellor• `Gor- kon', is the first to be set in the post-Cold War era.

For baby-boomers, of course, the last Star Trek ever represents the end of an era. Throughout, the audience cheered on the ageing Captain Kirk and his fat, jowly crew with loud shouts and applause. Afterwards, however, a few Trekkies admitted they were disappointed that the famous Star Trek theme tune was nowhere to be heard. 'I watched the last 25 years of my life flash before my eyes,' the man sitting next to me said tearfully at the end of the film, 'It was incredibly moving.'