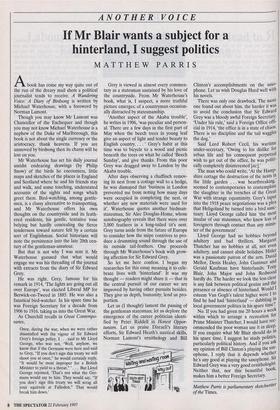 If Mr Blair wants a subject for a hinterland, I suggest politics

Abook has come my way quite out of the run of the dreary mail shots a political journalist tends to receive. A Wandering Voice: A Diary of Birdsong is written by Michael Waterhouse, with a foreword by Norman Lamont.

Though you may know Mr Lamont was Chancellor of the Exchequer and though you may not know Michael Waterhouse is a nephew of the Duke of Marlborough, this book is not about the single currency or the aristocracy, thank heavens. If you are unmoved by birdsong then its charm will be lost on you.

Mr Waterhouse has set his daily journal amidst endearing drawings (by Philip Snow) of the birds he encounters, little maps and sketches of the places in England and Scotland where he and his friends stay and walk, and some touching, understated accounts of the sights and songs which greet them. Bird-watching, among gentle- men, is a classy alternative to trainspotting, and Mr Waterhouse offers his own thoughts on the countryside and its feath- ered residents, his gentle, tentative tone belying but hardly concealing the fierce tenderness toward nature felt by a certain sort of Englishman. Social historians will note the persistence into the late 20th cen- tury of the gentleman-amateur.

But that is not why I was sent it. Mr Waterhouse guessed that what would engage me was his threading of the journal with extracts from the diary of Sir Edward Grey.

He was right. Grey, famous for his remark in 1914, 'The lights are going out all over Europe', was elected Liberal MP for Berwick-on-Tweed in 1885. He was also a fanatical bird-watcher. In his spare time he was Foreign Secretary for a decade from 1906 to 1916, taking us into the Great War.

Once, during the war, when we were rather dissatisfied with the vigour of Sir Edward Grey's foreign policy, I .. . said to Mr Lloyd George, who was not, 'Well, anyhow, we know that if the Germans were here and said to Grey, "If you don't sign this treaty we will shoot you at once," he would certainly reply, "It would be most improper for a British Minister to yield to a threat." ' .. . But Lloyd George rejoined, 'That's not what the Ger- mans would say to him. They would say, "If you don't sign this treaty we will scrag all your squirrels at Fallodon." That would break him down.'

Grey is viewed in almost every commen- tary as a statesman sustained by his love of the countryside. From Mr Waterhouse's book, what is, I suspect, a more truthful picture emerges: of a countryman occasion- ally distracted by statesmanship.

`Another aspect of the Akaba trouble', he writes in 1906, 'was peculiar and person- al. There are a few days in the first part of May when the beech trees in young leaf give an aspect of light and tender beauty to English country. . . . ' Grey's habit at this time was to bicycle to a wood and picnic beneath the trees on what he called 'Beech Sunday', and give thanks. From this poor Grey was dragged away to London by the Akaba trouble.

After days observing a chaffinch remov- ing its nest from a cottage wall to a hedge, he was dismayed that 'business in London prevented me from noting how many days were occupied in completing the nest, or whether any new materials were used for it'. Waterhouse quotes another birdman- statesman, Sir Alec Douglas-Home, whose autobiography reveals that there were over 3,000 feathers in a long-tailed tit's nest. Grey turns aside from the future of Europe to consider how the snipe contrives to pro- duce a drumming sound through the use of its outside tail-feathers. One proceeds through Mr Waterhouse's book with grow- ing affection for Sir Edward Grey.

So let me here confess. I began my researches for this essay meaning it to cele- brate lives with 'hinterland'. It was my thought — readers might share it — that in the central pursuit of our career we are improved by having other pursuits besides. They give us depth, humanity; lend us pro- portion.

Let us (I thought) lament the passing of the gentleman statesman; let us deplore the emergence of the career politician identi- fied by Peter Riddell in Honest Oppor- tunism. Let us praise Disraeli's literary efforts, Sir Edward Heath's nautical skills, Norman Lamont's ornithology and Bill Clinton's accomplishments on the saxo- phone. Let us wish Douglas Hurd well with his novels.

There was only one drawback. The more one found out about him, the harder it was to avoid the conclusion that Sir Edward Grey was a bloody awful Foreign Secretary. `Under his rule,' said a Foreign Office offi- cial in 1914, 'the office is in a state of chaos. There is no discipline and the tail waggles the dog.' Said Lord Robert Cecil, his wartime under-secretary, 'Owing to his dislike for urban life and his consequent perpetual wish to get out of the office, he was politi- cally completely disinterested [sic].'

The man who could write, 'At the Hamp- shire cottage the destruction of the nests in, the little garden . . . was heartbreaking, seemed to contemporaries to contemplate the slaughter in the trenches of the Great War with strange equanimity. Grey's input into the 1918 peace negotiations was a plea that Heligoland be turned into a bird sanc- tuary. Lloyd George called him 'the most insular of our statesmen, who knew less of foreigners through contact than any mints` ter of the government'. Lloyd George had no hobbies beyond adultery and bad thrillers. Margaret Thatcher has no hobbies at all, not even adultery, and cannot abide holidays. Hitler was a passionate patron of the arts. David Mellor, Denis Healey, John Gummer and Gerald Kaufman have hinterlands; Tony Blair, John Major and John Redwood hardly do. The harder we look the less clear is any link between political genius and the presence or absence of hinterland. Would I esteem Van Gogh's talent higher were I to find he had had 'hinterland' — dabbling 111 local government politics in his spare time? No. If you had given me 20 hours a week within which to arrange a recreation for Prime Minister Thatcher, I would have rec- ommended the poor woman use it in sleep. If you enquire what Mr Blair should do in his spare time, I suggest he study politics, particularly political history. And if you ask my opinion of Bill Clinton's playing the sax- ophone, I reply that it depends whether he's any good at playing the saxophone. Sir Edward Grey was a very good ornithologist. Neither that, nor this beautiful book, makes him a better Foreign Secretary.

Matthew Parris is parliamentary sketchwriter of the Times.