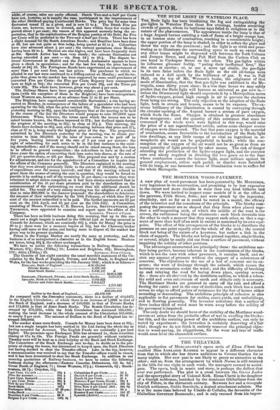 THE BUDE LIGHT IN WATERLOO PLACE.

THE Bude light has been irradiating the fog and extinguishing the gas-lights in Waterloo Place these few evenings, besides attracting crowds of gazers, whom its luminous rays failed to enlighten as to the nature of the phienomenon. The appearance inside the lamp is that of a huge Argand burner emitting a rash of flame of a bright orange hue, in an intense state of combustion, reaching to a considerable height ; the upper portion of the lamp is shaded, in order to soften the glare and throw the rays on the pavement ; and the light is so vivid and pene- trating as to illuminate the surrounding space to such an extent that any other lamps might be dispensed with between the York Column and Jermyn Street, and along Pall Mall from the Carlton Club on one hand to Cockspur Street on the other. The gas-lights within its influence glimmer feebly, "paling their ineffectual fires," like the stars at sunrise ; or, to use a more apt simile, the gas-light in its turn fades before the Bude light as the old oil-lamps were reduced to a dull spark by the brilliancy of gas. It was in Pall Mall, on the top of Mr. W/NSOR'S house, the originator of that mode of illumination, that the first gas-light was exhibited in the Me- tropolis, some thirty years since: in a less time hence we may safely predict that the Bade light will become as universal as gas now is,— unless the Drummond light should supersede it by a Metropolitan moon of hydro-oxygen, poised high enough in air to prevent the shadows. from being too strong. The only objection to the adoption of the Bade light, both in streets and houses, seems to be its expense. The ex- treme brilliancy of the illumination is caused by conveying through the circular opening of the Argand burner a stream of pure oxygen, which feeds the flame. Oxygen is obtained in greatest abundance from manganese ; and the quantity of this substance that must be consumed if the whole town were lighted in this way, would raise the price of a not superabundant article, unless some cheaper source of oxygen were discovered. The fact that pure oxygen is the material of combustion, seems favourable to the introduction of the Bade light into dwellings, as any little escape of so vital an ingredient in at- mospheric air would not be prejudicial to health ; while the con- sumption of the oxygen of the air would not be so great as from an equal quantity of light produced by other means. The risk of danger attending the production of the hydro-oxygen light, and the extreme care and nicety required in directing the two gases on to the lime whose combustion causes the intense light, must militate against its general employment, unless each parish or district were furnished with its lamp, or one immense focus of illumination were to suffice for the whole Metropolis.