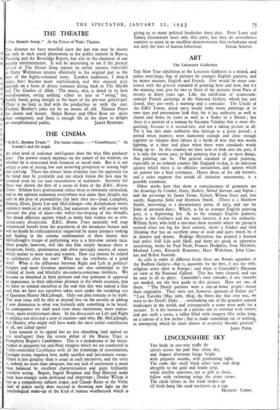 Ar what level of audience intelligence does the wise film producer aim? The answer clearly depenas on the nature of his wisdom, on whether he is concerned with financial or social ends. But it is not simply a case of aiming low and acmeving prosperity or aiming high ana starving. There has always been evidence that the approach via the head may be profitable and the attack below the ben may be resented even by tne least ratiocinative of audiences. 'Recently the Press was shown the first of a series of films of the B.B.C. Brains Trust. Seldom have professional critics been so obviously enthralled, and in my opinion audiences everywhere will share their delight, not only at the play of personalities (for here they are—Joad, Campbell, Huxley, Elliot, jenny Lee and McCullough—like disembodied voices sudden_y maned in antic flesh), but audiences also will savour with pleasure the play of ideas—the will-o'-the-wispmg of the thought, that dread affliction against which so many film studios are so con- scientiously disinfected. B.B.C. Brains Trust naturally will reap commercial benefit from the popularity of the broadcast feature and will no doubt be enthusiastically supported by many listeners seeking and finding in the cinema confirmation of their theory that McCullough's troupe of performing wits is a first-rate variety turn. Most people, however, will like this film simply because there is discussion, lively, spontaneous and often movingly sincere, of issues which matter to most men and women. How can nations be helped to collaborate after the war? What are the attributes of a good wife? What is the difference between Right and Left in politics? Simpler and more frivolous questions are also submitted to the tableful of lively and blissfully tm-camera-conscious intellects. We become so absorbed in their gestures and tiny grimaces of approval or impatience, in their infectious pleasure in the whole occasion, that we have to remind ourselves at the end that this was indeed a film and that we have not ourselves taken seats under the twinkling eye of Question-Master McCullough. Only one plea remains to be made. The next issue will be able to depend less on the novelty of adding a new dimension to what was formerly only something to be heard. In consequence we shall need even more excitement, more contro- versy, more revolutionary ideas. In the discussion on Left and Right in politics one detected a note of caution—and why, Mr. McCullough, was Huxley, who might well have made the most useful contribution of all, not called upon?

Less unusual in its appeal but no less absorbing (and indeed no less intelligent) than the screen debut of the Brains Trust is Humphrey Bogart's Casablanca. This is a melodrama of the black- market in passports for anti-Nazi refugees which we see conducted in Vichy-controlled Casablanca with all the trimmings of assassination, Gestapo terror, hopeless love,. noble sacrifice and last-minute escape. There is less gunplay than is usual in such narratives, and the story is, indeed, no more than adequate, but any lack of excitement is more than balanced by excellent characterisation and quite brilliantly sensitive acting. Bogart, Ingrid Bergman and Paul Henreid make their love-triangle seem profound and important ; Dooley Wilson is fine as a sympathetic cabaret singer, and Claude Rains as the Vichy chief of police really does succeed in throwing new light on the Psychological make-up of the kind of human weathercock which is

giving us so many political headaches these days. Peter Lorre and Sidney Greenstreet have only thin parts, but they do nevertheless contrive to assist in an excellent demonstration that melodrama need not defy the laws of human behaviour. EDGAR ANSTEY.