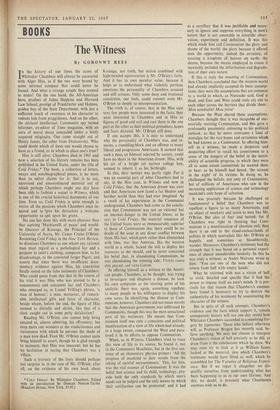 IN the history of our times the name of Whittaker Chambers will always be associated with Alger Hiss, as if the two were bound by some infernal compact that could never be loosed. And what a strange couple they seemed to make! On the one hand, the All-American hero, product of Johns Hopkins and Harvard Law School, protege of Frankfurter and Holmes, golden boy of the State Department, with just a sufficient touch of sweetness in his character to redeem him from priggishness. And on the other, the déclassé intellectual, Communist spy turned informer, ex-editor of Time magazine, with an aura of moral decay concealed under a lately acquired religiosity. One came straight out of Henry James, the other from Dostoievsky. Who could doubt which of them one would choose to have as a friend, or in which to place one's trust?

Hiss is still alive; Chambers died in 1961 and now a selection of his literary remains has been published in the United States, under the title of Cold Friday.* The book, a collection of letters, essays and autobiographical pieces, is no more than its editor claims for it; that is to say, unrevised and uncoordinated material out of which perhaps Chambers might one day have been able to fashion a sequel to Witness, which is one of the crucial historical documents of our time. Even so, Cold Friday is quite enough to revive all the passions which Chambers once in- spired and to 'give his detractors a welcome opportunity to, spit upon his grave.

No one has done this with more pleasure than that aspiring 'Machiavelli of peace' and would- be liberator of Katanga, the Principal of the University of Accra, Mr. Conor Cruise O'Brien. Reviewing Cold Friday in the New York Review, he dismisses Chambers as one whom any rational man must regard as a pathological liar and a perjurer in saint's clothing, compares him, to his disadvantage, to the convicted forger Pigott, and asserts that since there was insufficient docu- mentary evidence against Hiss, his conviction finally rested on the false testimony of Chambers. Who could guess from this that in the course of his trial it was Hiss who was proved to be a consummate and consistent liar and Chambers who emerged as, in Lionel Trilling's phrase, 'a man of honour'; a man, moreover, of remark- able intellectual gifts and force a character, beside whom, before the end, the figure of Hiss seemed to dwindle and shrink, like that of a clerk caught out in some petty defalcation?

Reading Mr. O'Brien, one cannot help being amazed at, almost admiring, his effrontery; but even more one wonders at the vindictiveness and viciousness with which he pursues the shade of a man now dead. Even Mr. O'Brien cannot quite bring himself to assert, though he is glad enough to insinuate, that Hiss was innocent; but he has no hesitation in saying that Chambers was a Villain.'

Such a travesty of the facts should perhaps not surprise us in the case of Mr. O'Brien; after all, on the evidence of his own book aboUt Whittaker Chambers. Edited by Duncan Norton-Taylor. York, $5.95.) * COLD FRIDAY. By with an introduction (Random House, New Katanga, not truth, but action combined with high-minded equivocation is Mr. O'Brien's forte. And it has its own peculiar value, because it helps us to understand what violently partisan emotions the personality of Chambers aroused and still arouses. Only some deep and irrational conviction, one feels, could commit even Mr. O'Brien so deeply to misrepresentation.

The truth is, of course, that in the Hiss case very few people were interested in the facts; they were interested in Chambers and in Hiss as figures of good and evil and cast them in the one part or the other as their political prejudices, hopes and fears dictated. Mr. O'Brien still does.

If one accepts this, it is easy to understand why the personality of Chambers was, and re- mains, a stumbling-block and an offence to many liberal and progressive Americans. It seemed that such a man, an Ishmael rejected by society, could have no share in the American dream; Hiss, with his air of a bright yet earnest college boy, seemed to inherit it as his birthright.

In this, their instinct was partly right. For it was an essential part of what Chambers had to say, in the Hiss case, in Witness and now in Cold Friday, that the American dream was over and that Americans now faced a far bleaker and harsher world than they had ever imagined. As a result of his experiences in the Communist underground, Chambers had come to the conclu- sion that Communism was not an external but an internal. danger to the United States; as he says in Cold Friday, the material resources of the United States were so immeasurably superior to those of Communism that there could be no doubt of the issue in any direct conflict between them. His fear, which grew rather than diminished with time, was that America, like the western world as a whole, lacked the will to deploy her resources as she should, and he never concealed his belief that, in abandoning Communism, he was abandoning the winning side; Victrix causa deis placuit, sed victa Caton'.

In offering himself as a witness to the Ameri- can people, Chambers, as he thought, was trying to investigate and diagnose a disease, he took his own symptoms as the starting point of his analysis; there was, again, something repellent to many people in his willingness to display his own sores. In identifying the disease as Com- munism, however, Chambers did not mean merely that the American government was infiltrated by

Communists, though this was the most sensational part of his testimony. He meant, that Com- munism itself was only a conscious and political manifestation of a view of life which had already, to a large extent, conquered the West and para-

lysed it in its efforts to oppose Communism.

When, as in Witness, Chambers tried to trace this view of life to its source, he found it, not in the Communist Manifesto, but in the first sen- tence of an elementary physics primer,: 'All the progress of mankind to date results from the taking of careful measurements.' This, for him, was the real essence of Communism. It was the belief that science and its child, technology, pro- vide both the only standards by which men's needs can be judged and the only means by which their satisfaction can be promoted; and it had

as a corollary that it was justifiable and neces- -

sary to ignore and suppress everything in men's nature that is not amenable to scientific obser- vation, experiment and definition. It was this which made him call Communism the glory and shame of the world; the glory because it offered men the opportunity, indeed the certainty, of creating a kingdom of heaven on earth; the shame, because the means employed to create it inevitably included the deformation and degrada- tion of their own nature.

If this is truly the meaning of Communism, then Chambers concluded that the western world had already implicitly accepted its basic assump- tions; they were the assumptions that are common to a world in which, as Nietzsche said, God is dead, and East and West could truly cry out to each other across the barriers that divide them: Mori semblable! Mon frere!

Because the West shared these assumptions, Chambers thought that it was incapable. of suc- cessfully resisting Communism, and this gave a profoundly pessimistic colouring to his political outlook, so that he never overcame a kind of nostalgia for the vast hopes and certainties which he had known as a Communist. In offering him- self as a witness, he made a desperate and despairing effort to recall his countrymen to a sense of the dangers of the belief in the inevit- ability of scientific progress, to which they were all to some extent committed; he wanted them to hear, as he himself had heard, 'the scream in the night' of its victims. In doing so, he challenged the beliefs, not only of Communists, but of millions of Americans who saw in the increasing application of science and technology mankind's only hope of salvation.

It . was precisely because he challenged so fundamental a belief that Chambers was so

repellent a figure to so many Americans, and an object of mockery and scorn to men like Mr. O'Brien. But also of fear and hatred; for if Chambers was right in thinking that Com- munism is a manifestation of absolute evil, then there is an end to the cloud-cuckoo-lands of politics in which neutralists like Mr. 'O'Brien so happily, and sometimes so bloodthirstily, wander. Moreover, Chambers's testimony had the strength that it was based on a personal experi- ence of almost unendurable intensity. In this he was truly a witness; as Andre Malraux wrote to him: 'You are one of the men who did not return from hell with empty hands.'

What he returned with was a vision of hell t. so vivid, detailed and specific that it had the power to impose itself on men's minds. It is pre- cisely for that reason that Chambers's enemies have found it necessary to try to destroy the authenticity of his testimony by assassinating the character of the witness.

But in spite of all such attempts, Chambers's evidence and the facts which support it, remain unimpaired; history will not one day reveal how Whittaker Chambers succeeded in committing for- gery by typewriter. Those who believe otherwise will, as Professor Brogan has recently said, be- lieve anything. We may not choose to interpret Chambers's vision of hell precisely as he did, or draw from it the conclusions which he drew. We may even try to look at it as William James looked at the material, into which Chambers's testimony would have fitted so well, which he assembled for The Varieties of Religious Experi- ence. But if we reject it altogether we dis- qualify ourselves from understanding what has been happening to us in our own lifetime. And this, no doubt, is precisely what Chambers's enemies wish us to do.