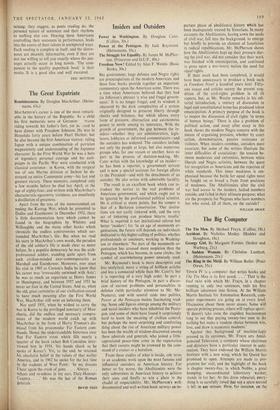 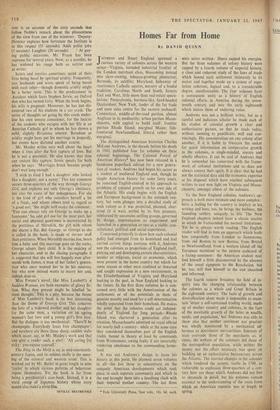 'EpocH IV is a computer that writes books and The Tin Men is its first novel. . . .' That is the

final twist with which Mr. Frayn, in a chapter running to only two sentences, ends his first brilliant adventure into fiction. At the William Morris Institute for Automation Research, com- puter experiments are going on at every level. Discussion about them never ceases. Some will operate printing presses, others will replace sport : 'It doesn't take even the stupidest businessman long to see that paying twenty-two men to do nothing but make a random choice between win, lose, and draw is economic madness.'

Against this background of machine-logic pressed to its extremes, Mr. Frayn sets Amal- gamated Television, a company whose chairman and directors have a particular interest in auto- mation. They have endowed the William Morris Institute with a new wing, which the Queen has promised to open. Attempts are made to pro- gramme her visit, and the highlight of the book is chapter twenty-five, in which Nobbs, a great humping, uncoordinated laboratory worker, stands in for her. At this dress rehearsal, every- thing is so carefully timed that nol a spare second is left in any minute. Here, for instance, on the tour is an account of the sixty seconds that follow Nobbs's remark about the pleasantness of the view from one of the windows: `Deputy- Director explains how fortunate the Institute is in this respect (31 seconds). Adds polite joke (3 seconds). Laughter (26 seconds) . . .' At guy- ing public occasions, Mr. Frayn has been supreme for several years. Now, as a novelist, he has widened his range both as satirist and as writer.

Saints and mystics sometimes speak of their. lives being beset by spiritual aridity. Frequently, too, husbands and wives speak of being bored with each other—though domestic aridity might be a better term. This is the predicament in Accident which faces Stephen Jervis, an Oxford don who has turned forty. When the book begins, his wife is pregnant. Moreover, he has just dis- covered two of his students in a car crash. The series of thoughts set going by this crash under- line his own uneasy conscience, for the luckier of the students who escapes with her life is an Austrian Catholic girl in whoni he has shown a mild, slightly flirtatious interest. Boredom or aridity might have put his marriage in jeopardy, but events have dictated another course.

Mr. Mosley writes very well about the heart when it tires after the first rapture of love. But he is not a pessimist. He also knows that time can restore this rapture. Jervis speaks for both when he says: 'Marriages break because people don't wait long enough.'

`I wish to God I had a daughter who looked like a daughter, not a navvy.' This key comment occurs three-quarters of the way through Georgy Girl, and explains not only Georgy's obstinacy, but also the cause of her unhappiness. For she is the kind of girl who considers herself a bit of a freak, and whom others tend to regard as `a good sort.' She might well evoke the comment : `You can always rely on Georgy to make up a foursome.' So, odd girl out for the most part, her social and physical, gawkiness is accentuated by the prettiness of Meredith, the girl with whom she shares a flat. But Georgy, or George as she is called in the book, is made of sterner stuff than prettiness. When Meredith marries Joe, bears him a baby and, this marriage goes on the rocks, George adopts their child. It is the making of her character, and in the closing paragraphs it is suggested that she will live happily ever after- wards with James, a man of her father's genera- tion who once wanted her to be his mistress, but who now instead wants to marry her and, indeed, does so.

Miss Forster's novel, like Miss Lambert's A Sudden Woman, are both examples of glossy fic- tion. What they present might be labelled 'in- stant thought.' This is a pity, because the theme of Miss Lambert's book is no less interesting than the theme of Georgy Girl. This concerns the love of a widowed mother and her daughter for the same man, a variation on an. ageing woman's last love and # young girl's first love. But the dialogue is too mechanical : `There'll be champagne. Everybody loves free champagne'; and nowhere are there those sharp, sudden stabs which occur, say, in Mr. Mosley's work and that can give a reader such a start: 'All caring [is] risky: you expose yourself.'

The Ring in the Meiji is set in mid-nineteenth- century Japan, and its subject really is the meet- ing of the oriental and western mind. This is worked out by Mr. Butler at great length in nine 'cycles' in which various patterns of behaviour repeat themselves. Yet the book is far 'from being a psychiatrist's case-book. Instead, it is a vivid sweep of Japanese history whose story would also makga vivid film.