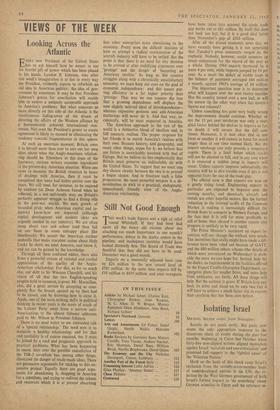 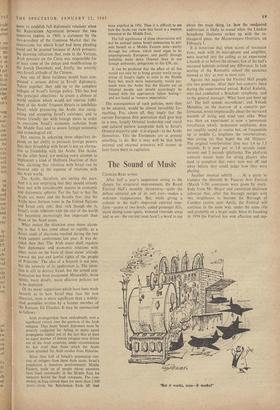 Israelis do not panic easily. But panic now seems the only appropriate response to the disastrous chain of events during the past few months, beginning in Cairo last October when forty-five non-aligned nations aligned themselves against Israeli 'racialism and neo-colonialism' and promised full support to the 'rightful cause' of the 'Palestine Nation.'

Hard on the heels of this shock came Israel's exclusion from the seventy-seven-member body of underdeveloped nations in the UN; the re- jection by the West German government of both Israel's formal request to `do something' about German scientists in Egypt and the informal re- quest to establish full diplomatic relations when the Reparations Agreement between the two countries expires in 1966; a statement by the vice-president of the Common Market that the concessions for which Israel had been pleading could not be granted because of Arab pressure; the dawning relisation that, even in the Vatican, Arab pressure on the Curia was responsible for at least some of the delays and modifications to the Jewish Document and, finally, the severely anti-Israeli attitude of the Chinese.

Any one of these incidents would have con- stituted a serious defeat to Israeli diplomacy.

Taken together, they add up to the complete collapse of Israel's foreign policy. This has had two principal objectives: to create a climate of world opinion which would not tolerate fulfil- ment of the Arabs' frequent threats to annihilate Israel, while pressuring the Arabs into recog- nising and accepting Israel's existence; and to create friendly ties with foreign states in order to overcome Israel's economic isolation from the Middle East and to secure foreign economic and technological aid.

Her success in achieving these objectives de- pends on her ability to persuade foreign powers that their friendship with Israel is not an alterna- tive to friendship with the Arabs. The Arabs, on the other hand, are making every attempt to

Implement a kind of Hallstein Doctrine of their own, claiming that relations with Israel can be secured only at the expense of relations with the Arab world.

The Arabs, therefore, are setting the pace. And it is not surprising that they should already have met with considerable success in economic and diplomatic spheres. For the fact is that the Arabs are many and the Israelis few; that the Arabs have thirteen votes in the United Nations and Israel only one; that, rich though she is, Israel's trade relations with the rest of the world are becoming increasingly less important than those of the Arab states.

What makes the situation even more alarm- ing is that it has come about so rapidly, as a direct result of decisions reached during the two Arab summit conferences last year. It was de- cided then that 'The Arab states shall regulate their 'diplomatic and economic relations with other states on the basis of these states' attitude toward the just and lawful rights of the people of Palestine.' The idea of a boycott is not new, but the intensity of its application is. The inten- tion is still to destroy Israel, but the armed con- frontation has been postponed. Meanwhile, more subtle, more deadly, more effective policies are to be deployed.

Of the many suggestions which have been made recently as to how Israel may face the new situation, none is more significant than a widely- read pamphlet written by a former member of the Knesset, Eli Eliachar. It may be summarised as follows: • Arab propagandists have undoubtedly won a significant victory over the question of the Arab refugees. Thus many Israeli diplomats must be severely castigated for failing to make equal propaganda capital out of the fact that at least an equal number of Jewish refugees were driven out of the Arab countries, under circumstances. no less cruel than those which the Arabs claim attended the Arab exodus from Palestine.

More than half of Israeli's population con- sists of refugees from these Arab states. Israel's population is therefore predominantly Middle Eastern, made up of people whose ancestors have lived continually in the Middle East for centuries before the Arab conquests. The com- munity in Iraq existed there for more than 2.500 years—from the Babylonian Exile WI they were expelled in 1951. Thus it is difficult to see how the Arabs can claim that Israel is a western intrusion in the Middle East.

The full significance of these observations will not be realised unless Israel endeavours to pre- sent herself as a Middle Eastern state—partly through her culture, which must cease to be unambiguously European; and partly through including many more Oriental Jews in our foreign embassies, delegations to the UN, etc.

It can be predicted that the effect of all this would not only be to bring greater world recog- nition of Israel's rights to exist in the Middle East; but, much more importantly, would per- suade even the Arabs that the Israelis are an Oriental people and should accordingly be treated with the appropriate fellow feeling— and not hated as 'western imperialists.'

The consequences of such policies, were they to be adopted, would be almost incredibly far- reaching. For, above all, they imply that the current European elite generation shall give way to a new, largely Oriental leadership and social and cultural pattern acceptable both to Israel's Oriental majority and—it is argued—to the Arabs themselves. This the Europeans are at present unwilling to do. But it may well be that both internal and external pressures will sooner or later force them to capitulate.