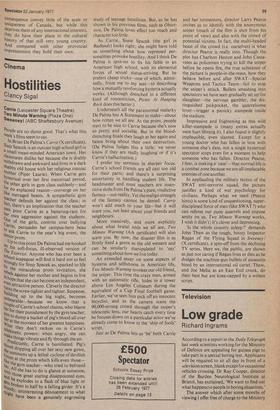 People are no damn good. That's what this Week's films seem to say. ,

, In Brian De Palma's Carrie (X certificate), Sissy Spacek is an outcast high school girl in a small mean-minded American town. Her Classmates dislike her because she is drably Withdrawn and awkward and lives in a dark shabby old house with her religious maniac nlother (Piper Laurie). When Carrie gets hYsterical over her first menstrual period, tIle other girls in gym class suddenly—and F'no explained reason—converge on her ce outraged beasts. A sympathetic gym 1,eacher defends her against the class; in 14ct, there's an implication that the teacher ses Poor Carrie as a battering-ram for r,"er own aggression against the students. lie of the girls, contrite over bullying persuades her campus-hero beau I) ask Carrie to the year's big event, the senior prom.

OP to this point De Palma had me hooked

his soft-focus, ill-observed version of iie Exorcist. Anyone who has ever been a sc„11001 scapegoat will find it hard not to feel for Sissy Spacek as, sparked to life ruY the miraculous prom invitation, she iebels against her mother and begins to live eri hoPe that she can become an independent, ,ven attractive person. Cleverly the director ;urns the screw tighter and tighter. Suspense, „—hg up to the big night, becomes e"uearable—because we know that a h°41e of Carrie's school chums, who blame for their punishment by the gym teacher, her to dump a bucket of pig's blood all over veithat the moment of her greatest happiness. teCat they don't reckon on is Carrie's ekinetic powers: when angry, she can "141(e things vibrate and fly through the air. bi Predictably, Carrie is humiliated. Pig's stiec'od dripping all over her sexy new gown, or santrrions up a lethal cyclone of devilish iikees at the prom which kills even those— here t,he gym teacher--who tried to befriend she has to do is glance at someone, a„" those great staring disappointed eyes, 71 he explodes in a flash of blue light or tiots broken in half by a falling girder. It's a

have e been a genuinely engrossing study of teenage hostilities. But, as he has shown in his previous films, such as Obsession, De Palma loves effect too much and character too little.

As Carrie, Sissie Spacek (the girl in Badlands) looks right ; she might have told us something about how repressed personalities provoke hostility. And I think De Palma is spot-on to fix his fable in an American high school, with its elemental forces of sexual status-striving. But he prefers cheap tricks—one of which, admittedly, froze me to my seat—to describing how a mutually reinforcing hysteria actually works. (Although drenched in a different kind of romanticism, Picnic At Hanging Rock does this better.)

Underneath all the paranormal malarky De Palma has A Statement to make—about how rotten we all are. At the prom, people start to be nice to Carrie because she's now so pretty and sociable. But in the blooddrenching finale they laugh at her again and hence bring about their own destruction. (De Palma fudges this a little: we never know if they are really laughing or if it's Carrie's hallucination.)

I prefer my sermons in sharper focus. Carrie's school friends are all cast too old for their parts; and there's a surprising uncertainty in handling student life. The headmaster and most teachers are insensitive slobs from De Palma's pure, vindictive fantasy—not reality. Yet the malign strength of the fantasy cannot be denied. Carrie won't add much to your life—but it will scare you, not least about your friends and neighbours.

More massively, and more explicitly about what brutal sods we all are, Two Minute Warning (AA certificate) will also scare you. By now, the disaster film is as firmly fixed a genre as the old western and can be similarly manipulated to 'say' something about how we live today.

An extended essay on some aspects of hysteria and selfishness in American life, Two Minute Warning invokes our old friend, the sniper. This time the crazy man, armed with an automatic rifle, hides in a tower above Los Angeles Coliseum during the equivalent of a Cup Final football game. Earlier, we've seen him pick off an innocent bicyclist, and as the camera scans the 90,000-strong crowd through the sniper's telescopic lens, our hearts catch every time he focuses down on a particular actor we've already come to know in the 'ship of fools' script.

Just as De Palma lets us 'be' both Carrie and her tormentors, director Larry Pearce invites us to identify with the anonymous sniper (much of the film is shot from his point of view) and also with the crowd of potential victims. In fact, the multi-headed beast of the crowd (i.e. ourselves) is what director Pearce is really into. Though the plot has Charlton Heston and John Cassavetes as policemen trying to kill the sniper before he opens fire, the true substance of the picture is people-in-the-mass, how they behave before and after SWAT—Special Weapons and Tactics Team—fail to stop the sniper's attack. Bullets smashing into spectators we have seen gradually set up for slaughter—the nervous gambler, the distinguished pickpocket, the quarrelsome lover—trigger a panicky stampede inside the stadium.

Impressive and frightening as this wild killer-stampede is (many extras actually were hurt filming it), I also found it slightly implausible, even slanted. Except for a young doctor who has fallen in love with someone else's date, not a single hysterical spectator stops even for a moment to help someone who has fallen. Director Pearce, fear, is making a 'case'—that normal life is a combat zone because we are all implacable enemies of one another.

In applauding the military tactics of the SWAT anti-terrorist squad, the picture justifies a kind of war psychology for civilians. Perhaps what we need (Pearce hints) is some kind of unquestioning, superdisciplined force of men (like SWAT?) who can referee our puny quarrels and impose amity on us. Two Minute Warning works, I wish it didn't; it's clever and depressing.

'Is the whole country asleep ?' demands John Thaw as the tough, boozy Inspector Regan of the Flying Squad in Sweeney! (X certificate), a spin-off from the declining TV series. Here we, the public, are shown as just not caring if Regan lives or dies as he dodges the machine-gun bullets of assassins hired by an international oil cartel. Thaw, and Joe Melia as an East End crook, do their best but are knee-capped by a witless script.