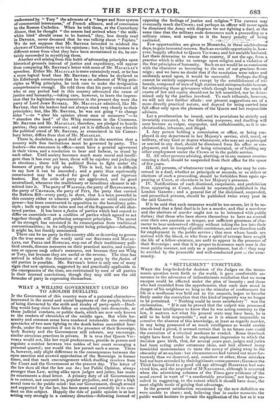 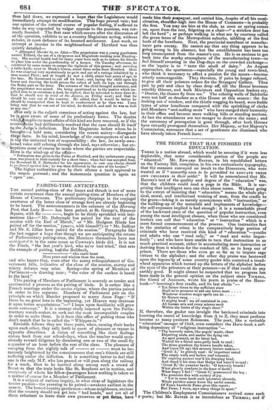 WHEN the long-looked-for decision of the Judges on the mono- mania question went forth to the world, it gave comfortable as- surance to the advocates of indiscriminate retaliation that no more escapes could be effected under the plea of insanity ; and those who had trembled from the apprehension that each man stood in danger of his neighbour so long as the stimulus of confinement for life in a madhouse was held out to the assassin, began to breathe freely under the conviction that this kind of impunity was no longer to be permitted. " Nothing could be more satisfactory"! was the exclamation. " If it can be proved that the culprit was possessed of sufficient intelligence to know that he was acting contrary to the law, it matters not what his general state may have been, he is still to be held responsible"; and as it is almost impossible to conceive the absence of this knowledge, at least as regards murder, in any being possessed of as much intelligence as would enable him to load a pistol, it seemed certain that in no future case could the execution of a criminal madman be evaded. Some drawback might have been found in the unpleasant impression to which the decision gave birth, that, for several years past, judges and juries had been acting under erroneous ideas, and had allowed many homicidal monomaniacs to taste the mercy of pining away in the obscurity of an asylum : but circumstances had turned out more for- tunately than we deserved, and, somehow or other, these mistakes had not been attended by theirlegitimate consequences ; GEORGE the Third having lived to a good old age although HADFIELD had sur- vived him, and the acquittal of WISt AUGUTEN, although it occurred when the advertising columns of the Times gave evidence of the usual crowd in want of " a comfortable provision," not having re- sulted in suggesting, to the extent which it should have done, the most eligible mode of gaining that advantage.

In the general satisfaction occasioned by the new definition we were unable to share; and, believing that in cooler moments the public would hesitate to permit the application of the law as it was

thus laid down, we expressed a hope that the Legislature would immediately attempt its modification. This hope proved vain; btit our opinion of the natural course of popular feeling, if suffered to take its way ungoaded by vulgar appeals to the passions, was cor- rectly founded. The first case which occurs after the discussion of of the question, exhibits to us a country Magistrate acting, without rebuke, in open defiance of its boasted settlement. Last week, an attempt at murder in the neighbourhood of Hertford was thus quietly detailed-

" Attempted Murder by an Idiot.—The perpetrator was a young gentleman named Tilliard, the son of a clergyman and Magistrate residing near Hunting- don. His mental health had for many years been such as to induce his friends to place him under the guardianship of a keeper. On Tuesday afternoon, he contrived by some means to escape the vigilance of this person; and, secreting a table-knife, went to Monk's Green, about three miles from Hertford. Here be was observed very mysteriously to go in and out of a cottage inhabited by .a man named Platt ; and at length be met a child, about four years of age, in the lane. He threatened to cat off its bead ; and, laying the child upon his knees and drawing the knife across the calves of both its legs, cut through the fleshy part to the bone. The screams of the child brought assistance, and the perpetrator was seized. On being questioned as to the motive which im- pelled him to so atrocious a deed, he replied, that he intended to have done it ; that he should now be tried at the Assizes, on Friday next ; and that he should be sent out of the country. He added, that it would be better be should be transported than be kept in confinement as he then was. Upon being told that he was out of his mind, he denied it, and said he was as well as any one." ,Not only is the culprit conscious of acting against the law, but he ja vin aware of some of its preliminary forms. The doubts whi_ • omplicate most affairs of this kind are here removed, as if the mono niac had deliberately resolved that the case should fit itself tcohe udge s definition. But the Magistrate before whom he is brought—a bold man, considering the recent outcry—disregards thee facts. In his mind, knowledge of the consequences of an act is no) the universal test of responsibility : the law, its newly-awa- rfk::.kened_voice still echoing through the land, says otherwise; but ex- eteptions must of course be made where the parties are respectable. Here is the wind-up of the affair- " Intimation was given to the Police at Hertford, and the unfortunate young man was placed in their custody for a short time ; when bail was accepted from the Reverend H. F. Skrimsher for his appearance, in case any charge should be preferred against him : he was then delivered to the care of his keeper."

The higher authorities give by their silence a tacit approval to .the course pursued; and the monomania question is again an " open" one.