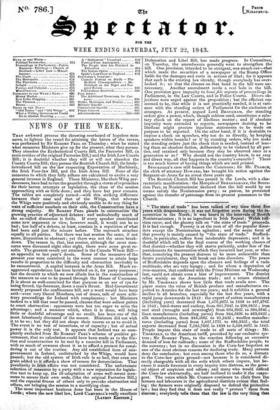 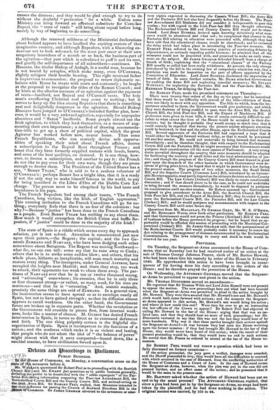 " The state of trade" has been talked of any

time these five years with despondency : it was not forgotten even during the in- surrection in the North; it was heard in the intervals of Scotch Nonintrusionism it is an ingredient in Irish Repeal ; Welsh toll- riots recur, and the gloomy talk on "the state of trade" proceeds. It is bad enough. Poverty is at the root of all the popular disor- ders except the Nonintrusion agitation ; and the acute form of that poverty is mainly caused by " the state of trade." Stafford- shire, in particular, suffers from intolerable depression ; and it is doubtful which will be the final course of the working classes of that district—whether they will starve patiently, under fear of the punishments for insurrection which they incurred last year, or whe- ther, conceiving the present distress to be more unbearable than future punishment, they will break out into disorders. The peace of Staffordshire depends upon the chances and feelings of a rude multitude, who are very hungry ; and for whom a deputation of iron-masters, that conferred with the Prime Minister on Wednesday last, could not obtain even a hint of improvement. The district relies mainly on the American trade; and a return obtained by Mr. THORNELY shows how little that trade avails now. The paper states the value of British produce and manufactures ex- ported to America for the last ten years; and it exhibits a general decline in all branches, especially for the last five years, with a rapid jump downwards in 1842: the export of cotton manufactures (including yarn) decreased from 1,476,2671. in 1838 to 487,2761. in 1842; hard-wares and cutlery, from 661,7041. to 298,8811.; iron and steel (wrought and unwrought) from 634,3951. to 394,8541.; linen manufactures (including yarns) from 944,5891. to 463,6451.; silk manufactures, from 348,5061. to 81,2431.; woollen manufac- tures (including yarns) from 1,887,1771. to 892,3351.; the total exports decreased from 7,585,7601. in 1838 to 3,528,807/. in 1842. People impute this state of trade to all sorts of things : Mr. THORNELY, to the American tariff, provoked by our exclusive sys- tem; Sir ROBERT PEEL, to the reaction following an excessive demand of iron for railroads ; some of the Staffordshire people, to the currency ; but in no discussion is the Corn-law forgotten as one of the most obvious reasons for declining trade. Many persons deny the conclusion; but even among those who do so, a distaste to the Corn-law gains ground—not because it is considered di- rectly chargeable with all the evils which others impute, but be- cause it stands foremost in every inquiry into distress, as the gene- ral object of suspicion and odium ; and many who would defend. the Corn-law abstractedly, are half inclined to make it the reaps- goat. The votes which Mr. COBDEN continues to elicit from the farmers and labourers in the agricultural districts evince that feel- ing: the farmers were originally disposed to defend the protective law; but they find that it does not really It protect " them from diatreili; everybody tells them that the law is the very thing that

causes the distress; and they would be glad enough to try to do without the doubtful " protection " for a while. Unless some Ministry can bring forward an effectual substitute for Corn-law Repeal, the " state of trade " will bring about repeal before long, merely by way of beginning to do something.