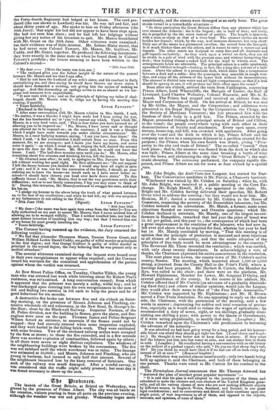 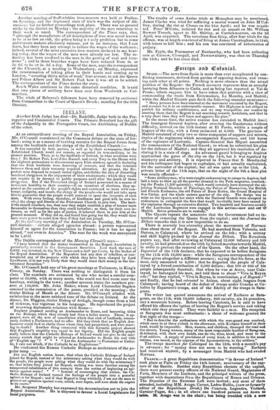 The launch of the Great Britain, at Bristol on Wednesday, was graced by the presence of Prince Albert. The city was all bustle on the occasion, visiters pouring in from all parts on the previous evening, although the weather was wet and gloomy. Wednesday began more

auspiciously, and the streets were thronged at an early hour. The great steam-vessel is a remarkable structure-

" In three particulars the Great Britain differs from any steamer which has ever crossed the Atlantic : she is the largest ; she is built of iron; and lastly, she is propelled by the the screw instead of paddles. The length is immense, with a stem as sharp as that of a river-boat. The steamer carries six masts besides her funnel ; which, by the way, is of immense diameter, but very short. Only one of the masts is a permanent erection, the second from the bowsprit. It is much thicker than are the others, and is meant to carry a square sail and topsails. The other masts are designed to carry fore-and-aft mainsails and gaff-topsails exclusively. As they work upon a swivel on deck, they can all be struck in a gale of wind with the greatest ease, and without hampering the deck ; thus leaving almost a naked hull for the wind to whistle over. The arrangements below are admirable. The principal saloon is a noble apartment, upwards of 100feet in length—looking, in fact, like a long slice cut out of a ball- room. Above the saloon is a promenade deck, which looks like a compromise between a deck and a cabin : here the passengers may assemble in rough wea- ther, and enjoy all the airiness of the upper deck without its inconvenience. The steamer is divided into water and air-tight compartments; so that if a leak should be sprung in one, it will produce but little effect upon the vessel." Soon after ten o'clock, arrived the train from Paddington, conveying Prince Albert, Lord Wharneliffe, the Marquis of Exeter, the Earl of Liverpool, Lord Charles Wellesley, Colonel Bouverie, and Mr. G. E. Anson. The Prince had stopped and received an address from the Mayor and Corporation of Bath. On his arrival at Bristol, he was met by Mr. Gibbs, the Mayor, and the Corporation ; and addresses were presented to his Royal Highness by the Corporation, the Clergy, and the Society of Merchant Venturers ; the last presented him with the freedom of their body in a gold box. The Prince, attended by the Mayor, proceeded through the principal streets of Bristol and Clifton, to the vessel ; the people every where vying with each other in their demonstrations of loyalty and attachment. Every open space, every terrace, house-top, and hill, was crowded with spectators. After going over the vessel and the dock in which it lay, Prince Albert and the company sat down to a sumptuous dejeuner in a pavilion erected for the purpose ; the Prince, when his own health was drunk, giving "Pros- perity to the city and trade of Bristol." The so-called " launch " then took place ; that is, the steamer was floated from the dock in which she was built ; Prince Albert at the same time breaking a bottle of wine over the bows, and christening the ship the "Great Britain " ; the mul- titude shouting. The ceremony performed, the company rapidly dis- persed, and Prince Albert set out for town at four o'clock by a special train.

Mr. John Bright, the Anti-Corn-law Leaguer, has started for Dur- ham. The Conservative candidate is Mr. Purvis, a Chancery barrister.

Winchester was visited by Mr. Cobden on Saturday ; when he, with Mr. John Bright, was received at a public meeting at the Corn Ex- change. Mr. Ralph Etwall, M.P., was appointed to the chair. Mr. Bright and Mr. Cobden having delivered their speeches, Mr. Robert Owen tried to address the meeting ; but they would not bear him. Mr. Hoskins, M.P., denied a statement by Mr. Cobden in the House of Commons, respecting the poverty of the Dorsetshire labourers ; but Mr. Cobden insisted on its correctness. Mr. Marsh, a farmer, made some objections founded on currency and Owenite questions ; which Mr. Cobden declined to entertain. Mr. Mundy, one of the largest tenant- farmers in Hampshire, remarked that last year the price of bread was

1s. 6d. per gallon, and this year Is.; the consequence of which had been a great improvement in the condition of the labourer, who had now 3s. left over and above what he required for food, whereas last year he had

but Is. Mr. Mundy concluded by moving, "That this meeting is of opinion that the principle of protection is unsound and most injurious to all classes of the community, and that the entire adoption of the principles of free trade would be most advantageous to the country."

The Reverend Mr. Thom seconded the resolution ; which was carried, with only about twenty dissentients. In acknowledging a vote of thanks, the Chairman expressed his entire concurrence in the resolution. The next place was Lewes, the county-town of Mr. Cobden's native county, Sussex. The meeting, which mastered about 1,500 or 1,600 strong, adjourned from the County Hall to the Friar's Field, where a hustings had been prepared. Mr. Herbert B. Curteis, the Member for Rye, was called to the chair ; and there were on the platform, Mr. Howard Elphinstone, Member for Lewes, Mr. Sergeant D'Oyley, and several gentlemen of the county. In the course of his address, Mr. Cobden offered that if Mr. Curteis (an advocate of a gradually diminish- ing fixed duty) and others of similar opinions, would join the League, they would alter their name to that of "the Free Trade Association." Mr. Cobden was supported by Mr. Elphinstone ; and Mr. H. Brown moved a Free Trade resolution. No one appearing to reply on the other side, the Chairman, with the permission of the meeting, said a few words in answer ; deprecating the sudden and total cessation of protec- tion, especially as it would tend to reduce the wages of agriculture : he recommended a duty of seven, eight, or ten shillings, gradually dimi- nishing one shilling a year; with power to the Queen or Government,

if it were acting prejudicially, to modify that duty. (Laughter.) Mr. Cobden remarked upon the Chairman's odd predicament in becoming the advocate of the minority— It was admitted we had been going wrong for a long period, and his honour- able friend was afraid they should get right too fast. (Loud cheers and laugh-

ter.) He thought it was better not to keep them in misery. If they must

boil the lobster, put him into cot water at once, and not simmer him to death in cold. (Laughter.) He recollected having a conversation with an old farmer on the subject of a gradual repeal; who said, "Do you see that sheep- dog's tail, Sir? Do you think he would have liked it if we had cut off an inch every day instead of all at once ?" (Renewed laughter.?

The resolution was carried almost unanimously ; only two hands being held up against it, said the Chairman, and both of them belonging to one person. Thanks were voted to Mr. Cartels for his conduct in the chair.

The Birmingham Journal announces that Mr. Thomas Attwood has " matured the plan of another great popular movement"— "It is said that his plan is well adapted to the juncture of the times, and calculated to unite the electors and non-electors of the United Kingdom gene-

rally, and all the various classes of men who are now seeking different objets by different means, in England, Wales, Scotland, and Ireland, in one great legal confederation ; and to concentrate and direct all their exertions upon one 'tingle point, of vast importance to all of them, and opposed to the object., interests, and opinions, of none of them."

Another meeting of Staffordshire iron-masters was held at Dudley, on Saturday, and the depressed state of trade was the subject of dis- cussion ; but no further proceedings took place. There was no general strike in the district on Monday ; the majority of the men returning to their work as usual. The correspondent of the Times says, that, " although the manufacture of all descriptions of iron was never known to be at so low an ebb, the prices being not only profitless but to some unfortunate makers absolutely ruinous, yet in no instance, that I can learn, has there been any attempt to reduce the wages of the workmen ; indeed, several of the most extensive iron-masters declared in my hear- ing today, that the wages of the men were already too low. The re- duction has been confined to the men in the getting of coal and iron- stone "; and in those branches wages have been reduced from 3s. or 3s. 6d. to 2s. or 2s. 3d. a day. Some of the men, says the correspondent of the Chronicle, at a meeting in Wednesbury, on Monday, expressed the determination of taking pikes in their hands and coming up to London, "covering thirty miles of road," four abreast, to ask the Queen and Prince Albert and Sir Robert Peel how it was all to be settled. The correspondent of the Times denies the story.

South Wales continues in the same disturbed condition. It is said that two pieces of artillery have been sent from Woolwich to Car- marthen.

The trials of Rebecca's followers have been removed by certiorari from Carmarthen to the Court of Queen's Bench ; standing for the 30th October.