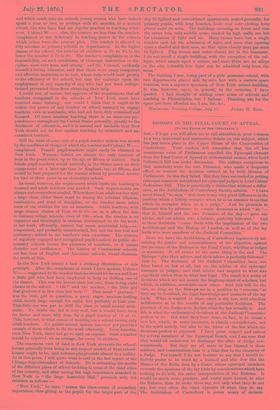 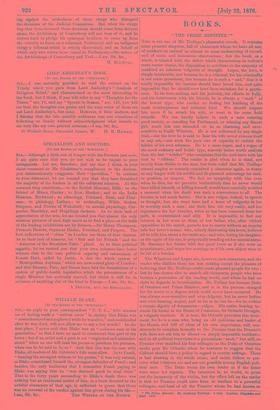 BISHOPS IN THE FINAL COURT OF APPEAL (To THE EDrros

OF THE SPEOTATOR:1 assessors or judges ; and that advice had respect to what was expedient rather than to what was legal. The result is a series of decisions which are not merely the laughing-stock of scholars, but which, in addition, annihilate each other. And this will be the case, so long as the Bishops are in a position to "concuss," as they say in Scotland, the legal knowledge and instincts of the lay lords. What is wanted in these cases is dry law, with absolute indifference as to the results of any particular decisions. The province of the Judge is to declare what the law actually is. And this is what the ecclesiastical decisions of the Judicial Committee profess to do. But what they have done, in fact, is to create a new law, which, in many instances, is plainly contradictory, not to the spirit merely, but also to the letter of the law which the decisions profess to expound. I have great respect and esteem for several members of the Episcopal Bench, and I am sure that they would all endeavour to discharge the office of Judge con- scientiously. But they are all more or less biassed in these matters, and conscientious bias is a fatal flaw in the character of a Judge. For myself, I do not hesitate to say that I should in- finitely prefer to be tried by a learned and able Jew like the Master of the Rolls, than by a Court whose episcopal members overrule the opinions of the lay lords by considerations which have nothing to do with the strict interpretation of the Rubrics. It would be much more prudent, and vastly more honest, to alter the Rubrics, than to make them say, not only what they do not say, but very often the exact opposite of what they do say. The Archbishop of Canterbury is never weary of declaim-

SIR,—I hope you will allow me to call attention in your columns to a very important and instructive debate on this subject, which has just taken place in the Upper House of the Convocation of Canterbury. Your readers will remember that the all but unanimous voice of Parliament expelled the Episcopal element from the Final Court of Appeal in ecclesiastical causes, when Lord Selborno's Bill was under discussion. The solitary exceptions to that unanimity were the two Primates, who made a desperate effort to rescind the decision arrived at by both Houses of Parliament. In this they failed. But they have succeeded in getting episcopal assessors substituted for episcopal judges in Lord Cairns' Judicature Bill. This is practically a distinction without a differ- ence, as the Archbishop of Canterbury frankly admits. ". I have never found," he says, " that there is any very great difference in the position which a bishop occupies when he is an assessor from that which he occupies when he is a judge." And he proceeds to illustrate this by reference to certain decisions in which "we "- that is, himself and the two Primates of the day—" gave our advice, and our advice was, I believe, perfectly followed." And so these decisions " came forth with the imprimatur of the two Archbishops and the Bishop of London, as well as of the lay lords who were members of the Judicial Committee."

Here we have the Archbishop of Canterbury ingenuously ad- mitting the justice and reasonableness of the objection against the presence of the Bishops in the Final Court, whether as judges or assessors. It all comes to the same thing in the end. The Bishops "give their advice, and their advice is perfectly followed." Just so. The decisions of the Judicial Committee have not In the New York school I had a striking illustration of this been based on law at all, but on the advice of the episcopal ing against the wickedness' of those clergy who disregard the decisions of the Judicial Committee. But when the clergy beg that henceforward these decisions should come from lawyers alone, the Archbishop of Canterbury will not hear of it, and he strives hard to pledge his episcopal brethren to come up from the country to force on a reluctant Parliament and an indignant clergy a tribunal which is utterly discredited, and on behalf of which only two voices were raised in Parliament,—the voices of the Archbishops of Canterbury and York.—I am, Sir, &c., M. MACCOLL.