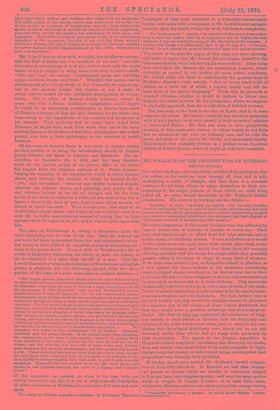 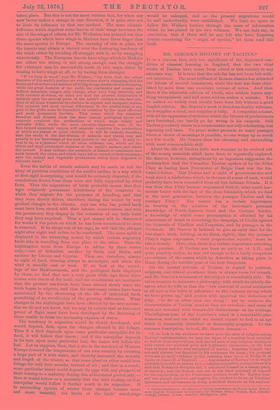 MR. WALLACE ON THE DISTRIBUTION OF _ANIMALS.* • [SECOND NOTICE.]

GRANTING the facts, now completely established by geologists, that the surface of the earth has been through all time, and is still, undergoing a series of changes, and that there is a constant tendency for all living things to adapt themselves to their sur- roundings by the simple process of those which are unfit being killed off, we come almost inevitably to Mr. Wallace's further conclusions. His merit is in working out the details :—

" Animals," he says, " multiply so rapidly, that we may consider them as continually trying to extend their range, and thus any new land raised above the sea by geological causes becomes immediately peopled by a crowd of competing inhabitants. the strongest and best adapted of which alone succeed in maintaining their position."

No better illustration of this could be taken than that afforded by insects, whose rate of increase is familiar to every one. Their two chief functions are, to afford food for other animals, and to be the means of fertilising flowers. A new field where they would be free from those who prey upon them would place them under different circumstances, and would free them from the necessity of being provided with the means for escape which they generally possess, either in the shape of wings or some kind of mimicry. If we take some isolated spot, as Kerguelen Island or Madeira, as a new habitat for them, without in the meantime considering what geological change produced it, we find at once that in their new home the insects whose wings are deficient or absent would not be destroyed, as they would be in their old home. That insects are occasionally born without wings, in every class of them, if not estab- lished by actual observation, is quite certain to be the case by anal° - gous monstrosities met with elsewhere. We find, further, that in the new locality not only would the wingless insects be protected in a negative way by the absence of their former destroyers, but that they would have a positive advantage due to a local pecu- liarity. Mr. Darwin long ago connected the occurrence of wing- less insects in such places as Madeira with the frequency and violence of the gales which occur there, and he came to the con- clusion that the winged individuals were blown out to sea and drowned, whilst those which had no wings were protected by their deprivation. The report of the Transit expedition to Kerguelen Island completely establishes this discovery, for moths, flies, and beetles were there found to be quite incapable of flight, though many had stumps or abbreviated wings, showing that their progenitors were formerly fully provided.

If further proof were needed, Mr. Wallace's careful compila- tion of facts fully affords it. In Madeira no less than twenty- two genera of insects, which are usually, or sometimes, winged in Europe, have only wingless species ; and even the same species which is winged in Europe becomes, in at least three cases, wingless in Madeira, without any other perceptible change having • Geographical Distributint of Animals. By Allred Russel Wallace. London: Macmillan and Co.

taken place. But this is not the most curious fact, for when any new factor makes a change in one direction, it is quite sure not to limit its influence to that one method. The same climatic influence which deprives some insects of their wings increases the size of the wings of others, for Mr. Wollaston has pointed out that those species which have wings in Madeira have them larger than the same species in Europe. The meaning of this is plain, for the insects may obtain a victory over the destroying tendency of the wind, either by avoiding all struggle with it, or by struggling victoriously. The European insects have wings which in Madeira are either too strong or not strong enough, and the struggle for existence may be successfully made in two ways, either by ceasing to have wings at all, or by having them stronger.

"If we keep in mind," says Mr. Wallace, "the facts that tho minor features of the earth's surface are everywhere slowly changing, that the forms and structure and habits of all living things are also slowly changing, while the great features of the earth, the continents and oceans and loftiest mountain ranges, only change after very long intervals, and with extreme slowness, we must see that the present distribution of animals upon the several parts of the earth's surface is the final pro- duct of all these wonderful revolutions in organic and inorganic nature. The greatest and moat radical differences in the productions of any part of the globe must be dependent on isolation by the most effectual and most permanent barriers. That ocean which has remained broadest and deepest from the most remote geological epoch will separate countries the productions of which most widely and radically differ, while the most recently-depressed seas, or the last-formed mountain ranges, will separate countries the productions of which are almost or quite identical. It will be evident, therefore, that the study of the distribution of animals and plants may add greatly to our knowledge of the past history of our globe. It may re- veal to us, in almanner which no other evidence can, which are the oldest and most permanent features of the earth's surface, and whioh the newest. It may indicate the existence of islands or oontinents now sunk beneath the ocean, and which have left no record of their existence, save the animal and vegetable productions which have migrated to adjacent lands."

Even the habits of certain animals may be made to tell the story of previous conditions of the earth's surface in a way which at first sight is surprising, and would be certainly disputed, if the conclusions drawn from them were not fully supported by other facts. Thus the migrations of birds probably means that they ws,re originally permanent inhabitants of the countries to which they migrate for the purposes of breetling, and that they were slowly driven elsewhere during the winter by very gradual changes in the climate. Any one who has petted birds must have been struck with their intense conservatism, and with the persistence they display in the retention of any little habit they may have acquired. Thus a pet canary will be distressed for weeks if the perch on which he has been accustomed to sleep is removed. If he sleeps out of his cage, he will visit the old spot night after night and refuse to be comforted. The same spirit is displayed in the unvarying routes by which certain migratory birds take in travelling from one place to the other. Thus the nightingales cross from Europe to Africa by three routes only,—one it Gibraltar, another by Sicily and Malta, and another by Greece and Cyprus. They are, therefore, always in sight of land, crossing always in moonlight, and when the wind is steadily east or west. If we look at the sound- ings of the Mediterranean, and the geological facts displayed by them, we find that not a very great while ago those three routes were tracts of dry land ; and the conclusions are inevitable that the present sea-levels have been altered slowly since the birds began to migrate, and that the customary routes have been maintained by the shortening of, the life of individual birds permitting of no recollection of the growing differences. What changes in the nightingale have been effected by the new necessi- ties we do not yet know, but we may be certain that an increased power of flight must have been developed by the drowning of those unable to Cross the increasing expanse of water.

The tendency to migration would be slowly developed, and would depend, first, upon the changes effected in the foliage. Thus if a bird depends upon some particular caterpillar for its food, it will follow that insect ; and if the caterpillar depends in its turn upon some particular leaf, the insect will follow the leaf. Let us suppose, then, that a rise in the sea-level of Western Europe lowered the temperature of our own country by covering a large part of it with water, and thereby increased the severity and length of the winter, so that some plant or other could bear foliage for only four months, instead of six ; and that as a result, some particular insect could deposit its eggs with any prospect of their coming to a maturity during this abbreviated period only,— then it would follow as a necessity that the bird feeding on this caterpillar would follow it further south in its migration. If in succeeding epochs of winter these changes became more and more material, the limits of the birds' wanderings

would be enlarged, and so the present migrations would be and undoubtedly were established. We have no space to follow Mr. Wallace further through the mass of information which he has placed in his two volumes. We can Only say, in conclusion, that if there still be any left who have lingering doubts concerning the " origin of species," let them read this book.