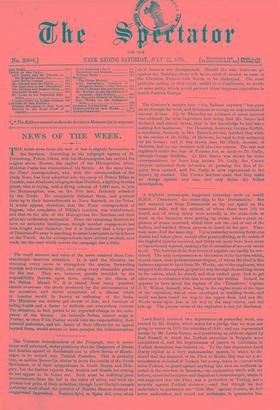 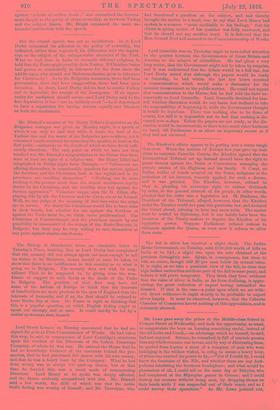 by Mr. Bright, which asked for a pledge that we were not going to renew in 1876 the mistakes of 1854 ; and one represented mainly by Mr. Lewis Farley, and presenting an address signed by Earl Russell, in which the Turkish atrocities in Bulgaria were complained of, and the hopelessness of justice to Christians in Turkish dominions was insisted on. To the first deputation Lord Derby replied in a very statesmanlike speech, in which he de- clared that the despatch of the Fleet to Besika Bay was not a de- monstration on behalf of Turkey, but a step, taken in concert with other Powers, to guard against anything like such an outbreak as ended in the murders at Salonica,—an explanation which will, we believe, create bothsurprise and disgust at Constantinople, where it was supposed that the Fleet was a protection to Turkey, not a security against Turkish violence ;—said that though we bad undertaken to guarantee the "Sick Man " against murder, we had never undertaken, and would not undertake, to guarantee. him

against " suicide or sudden death ;" and committed the Govern- ment deeply to the policy of strict neutrality, as between Turkey and the subject States. Mr. Bright expressed the most un- bounded satisfaction with the speech.