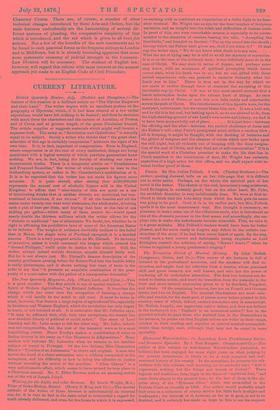 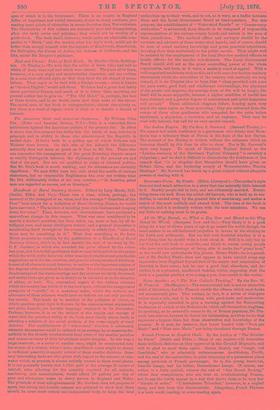 Episodes. By J. Tom Burgess. (Simpkin and Co.)—The author of this volume (a well-known Warwickshire journalist, we believe) has been engaged for some eight years on what, judging by the present instalment, is likely to be a very complete and well- executed history of his county. In the meantime, be presents his sub- scribers with this volume, well knowing, as ho modestly says, " that it represents nothing but tho fringe and tassels of history." Those legends and traditions, then, begin in the times of "mythical lore, " and come down almost to the present hour, for the last of them is the sin- gular story of the "Princess Olive," which was unravelled in the Probate Court as recently as 1866. Our author would probably admit that even as a collection of county stories his little book is slight and inadequate ; the interest of it, however, as far as it goes, is not to bo doubted, and it certainly has made us hope to live to see tho magnum opus of which it is the forerunner. There is no county in England fuller of important and varied interests, richer in sharp contrasts, pre- senting more points of attraction in every direction than Warwickshire. The illustrations of this volume are extremely poor and disappointing, after the tasty cover and printing; they would not be worthy of a guide-book. The book itself, however, would make an admirable com- panion to " Black," and the tourist, after his day's work, could not do better than occupy himself with the legends of Kenilworth, Dunchurch, the Rollrights, the Forest of Arden, the defense of Caldecote, and the like, under Mr. Burgess's guidance.