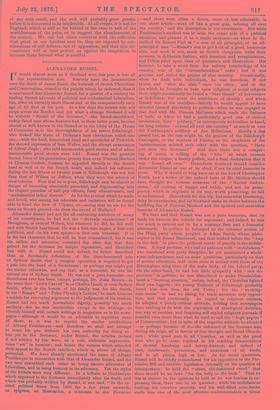 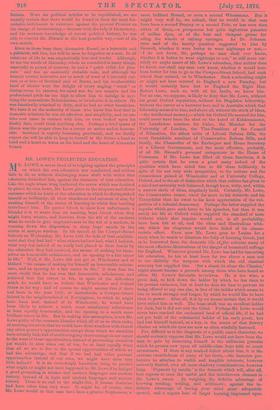 her representative men. Scarcely have the lamentations over the death of James Baird, the bulwark of Scotch Churchism and Conservatism, ceased in the pulpits which he endowed, than it is announced that Alexander Russel, for a quarter of a century the leading Scotch advocate of political and ecclesiastical Liberalism, has, after an enviably short illness and at the comparatively early age of 62 died at his post. In a few days the tourist tide will surge across the Border, and yet what a strange Scotland it will be without "Russel of the Seotsman,"—the broad-shouldered, ruddy-faced man whose features had, in these latter years, become almost as well known in the Strand or in the lobby of the House of Commons as in the thoroughfares of his native Edinburgh ; who looked like three of Dickens's best characters rolled into one,—with the bald, benevolent head and spectacles of Pickwick, the shrewd expression of Sam Weller, and the abrupt enunciation of Alfred Jingle ; who told innumerable good stories, and of whom innumerable good stories were told. Russel was the greatest Scotch force of his generation, greater than even Norman Macleod or Thomas Guthrie, because he appealed directly to the Scotch head as well as to the Scotch heart, and indeed his influence during the last fifteen or twenty years in Edinburgh was not less than that of Wilson or Jeffrey, when they were the adored of rival coteries. Now that he is gone, Edinburgh may be almost in danger of becoming absolutely parochial, and degenerating into the elegant paradise of half-pay officers, fussy educationists, and "ecclesiastical ladies' doctors." As for the journal which he made and loved, who among his admirers and imitators will be found able to bend the bow of Ulysses, or—seeing that we are for the time on Scotch ground—to draw the sword of Wallace?

Alexander Russel had not the all-embracing ambition of many of his countrymen, he had not the " slovenly omniscience " of Brougham, or even of Wilson, but whatever he did, he did well, and with Scotch heartiness. He was a first-rate angler, a first-rate publicist, and—in his own sphere—a first-rate humorist. It is in the last character that he will be best remembered, for it was his sallies and sarcasms, sustained day after day, that first gained for the Scotsman its unique reputation, and identified him with it. Russel could not, indeed, be better described than as Scotland's refutation of the time-honoured joke of Sydney Smith, that a surgical operation is required to get a joke into the head of a Scotchman ; or perhaps one might put the matter otherwise, and say that, as a humorist, he was the natural son of Sydney Smith. He was not a pure humorist—no Scotchman ever has been, except, perhaps, Dr. John Brown—in the sense that "Lewis Carroll "is, or Charles Lamb, or even Sydney

Smith, when in the bosom of his family was, for like Smith, in his " Essays " and " Peter Plymley's Letters," he made humour a vehicle for conveying argument to the judgments of his readers.

Russel had too much journalistic dignity, possibly too much modesty—for he was inarticulate except in his writings—to

identify himself with certain writings in magazines or in his news- paper—although it would be as advisable to republish some of these, as it was to reprint the similar productions of Albany Fonblanque—and therefore we shall not attempt

to trace his pen without his own authority for doing so ; but yet in the Scotsman, under Russel, the articles revised

if not written by him were, as a rule, elaborate argumenta- tions " set " in humour; and hence the success which attended their appeal to the Scotch intellect, which is, above all things, polemical. We have already mentioned the name of Albany Fonblanque in connection with that of Alexander Russel, and the two men resembled each other in being sincere advocates of Liberalism, and in using humour in its advocacy. Yet the styles

of the writers were very different. In a tribute to Fonblanque which appeared in the Scotsman immediately after his death, and which was probably written by Russel, it was said, " In the ex- cited political times from 1830 for a few years onwards, an epigram, an illustration, a witticism in the Examiner —and there were often a dozen, more or less admirable, in one short article—went off like a great gun, echoing all over the country," and the description is not overdrawn. But while Fonblanque's method was to seize the comic side of a political situation, and present it in a single sentence—as when he de- scribed Sir Robert Peel as " a man of all principles, or an all- principled man "—Russel's was to get hold of a good, humorous idea, and work it out, much as Scotch clergymen write their sermons, in deliberate fashion, with iteration and recapitulation, and Pelion piled upon Ossa of quotation and illustration. His humour, to take a word from the railway terminology of his country, was of the " circumbendibus " order ; but it was genuine, and suited the genius of that country. Occasionally, when he dealt with individuals, he was merciless, if not brutal, and "slew the slain" once too often ; and in the fun which he brought to bear upon religious or social subjects there might occasionally be found a "blue thread" of irreverence or indelicacy, but never the semblance of shoddy ; and when Russel was at his meridian—latterly he would appear to have devoted himself absolutely to politics—when he was engaged in that duel with Mr. Duncan McLaren which made the fortunes of both, or when he had a particularly good case of clerical intolerance, Tory " jobbery," or intemperate teetotalism in hand, his long articles " echoed all over the country" as much as ever did Fonblanque's artillery of Joe Millerisms. Hardly a day passed but, as the case might be, the grocers of the Edinburgh Canongate, or the weavers of Paisley, or the shepherds of the Lammermoors saluted each other with the question, " Have you seen the Scotsman?" And then there was a compar- ing of notes, a rolling of the " hits " as sweet morsels under the tongue, a hearty guffaw, and a final declaration that it was "Russel all over." Henceforth Scotland should consider Alexander Russel as one of its chief, if not its chief humorist in prose. Why it should so long have sat at the feet of Christopher North, how a writer of the refined taste of Mr. Skelton should have thought the riotous nonsense of the " Noctes Ambro- aiante," all reeking of haggis and toddy, and not its prose- poetry, which is exquisite in its way, worth preserving, we fail to understand. Henceforth let this big, but somewhat blustering, deity be overthrown, and let Scotland make its choice between the bubbling fun of Norman Macleod and the opulent and masculine humour of Alexander Russel.

We have said that Russel was not a pure humorist, that he made his humour the vehicle for argument ; and indeed, he was too much in earnest not to be a reasoner first and a humorist afterwards. In politics he belonged to the robuster section of the Whig party whose prophet is Adam Smith, whose philo- sopher is Sir James Macintosh, and that wished before the " leap in the dark " to place the political centre of gravity in the middle- class. A loyal partisan, who had no patience with " crotcheteers" who interfered with party discipline, he yet maintained a whole-

some independence, and on some questions, particularly on that of secular education, held views more in accord with those of the Birmingham wing than of the main body, of the Liberal party.

On the other hand, he had but little sympathy with "new de- partures" in politics; he was disinclined to make Disestablish- ment a "burning question," unless, indeed, the Churches lighted

their own faggots ; the young Radicals of Edinburgh probably loved him less than the old Tories ; for the " working-

man mania" he had no liking, for trade-unionism only opposi- tion, and that continually. In regard to religious matters, he adopted a purely critical attitude, holding that newspapers have nothing to do with the expression of theological doctrine, one way or another, and despising self-styled religious journals if possible even more than what he used to call the " kept papers" of Conservatism ; but in spite of the negative attitude he adopted

—or perhaps because of it—the influence of the Scotsman was, during his reign, all in favour of free thought and Broad Church-

men ; while good men in all Churches, as well as the good men who go to none, rejoiced in his scathing denunciations of clerical humbugs and heresy-hunters, and indeed of cant, intolerance, pretension, and meanness of all kinds,

and in all places, high or low. As for social questions, Russel will be chiefly remembered for his opposition to the Per- missive Bill and coercive legislation nenerally on the question of

intemperance ; he held the "stout, old-fashioned creed" that there should be no laws "for the belly or the back." That he

was as sincere in the opinions he held as he was fearless in ex- pressing them, there can be no question ; while his multifarious reading, his retentive memory, and his well-filled note-books made him one of the most effective controversialists in Great

Britain. Were his political articles to be republished, we are morally certain that there would be found in them the most for- midable indictment in existence against the present Premier on the charge of inconsistency,—because with the help of his memory, and his accurate knowledge of recent political history, he was able to convict Mr. Disraeli in the best possible way,—out of his own mouth.

Even in these busy days, Alexander Russel, as a humorist and a publicist, will live, nor will he soon be forgotten as a man. In all relations of life he was emphatically true and tender. Although, to use the words of Macaulay, whom he resembled in many things, especially in power of memory, he had a " quick relish for plea- sure " and was an eminently clubable man, and although his homely accent, indicative not so much of want of University cul- ture as of love of Scotland and of Burns, and his inexhaustible fund of stories were the delight of every angling " roost" or dining-room he entered, his mind was far too massive and his professional pride far too high to allow him to indulge in any- thing like journalistic Bohemianism, or to tolerate it in others. He was fanatically attached to duty, and he had no other fanaticism. We have it on the authority of those who knew him best that in domestic relations he was all affection and simplicity, and no one who ever came in contact with him, or even looked upon his kindly face, could think anything else. Perhaps a brief spasm of illness was the proper close for a career so active and so honour- able. Scotland is rapidly becoming provincial, and we hardly expect she will be able to keep to herself in the future a head so hard and a heart so warm as the head and the heart of Alexander Russel.