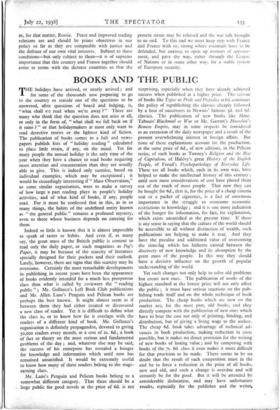 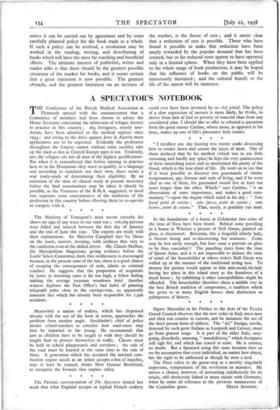 m HE holidays have arrived, or nearly arrived ; and J for some of the thousands now preparing to go to the country or seaside one of the questions to be answered, after questions of board and lodging, is, " what shall we read when we're away ?" There are many who think that the question does not arise at all, or only in the form of, " what shall we fall back on if it rains ? " or that holidaymakers at most only want to read detective stories or the lightest kind of fiction. The publication of books comes to a halt and news- papers publish lists of " holiday reading " calculated to place little strain, if any, on the mind. Yet for many people the annual holiday is the only time of the year when they haVe a chance to read hooks-requiring more attention and concentration than they are usually able to give. This is indeed only surmise, based on individual examples, which may be exceptional ; it would be exceedingly interesting if " Mass Observation," or some similar organisation, were to make a survey of how large a part reading plays in people's holiday activities, and of what kind of books, if any, people read. For it must be confessed that in this, as in so many things, the habits of the undefined entity known as " the general. public " remains a profound mystery, even to those whose business depends on catering for them.

Indeed so little is known that it is almost impossible to speak of tastes or habits. And even if, as many say, the great mass of the British public is content to read only the daily paper, or such magazines as Peg's Paper, it may be because of the scarcity of literature specially designed for their pockets and their outlook. Lately, however, there are signs that this scarcity may be overcome. Certainly the most remarkable developments in publishing in recent years have been the appearance of books evidently intended for a much less prosperous class than what is called by reviewers the " reading public " ; Mr. Gollancz's Left Book Club publications and Mr. .Allen Lane's Penguin and Pelican books are perhaps the best known. It might almost seem as if between them they had either created or discovered a new class of reader. Yet it is difficult to define what the class is, or to know how far it overlaps with the readers of a different kind of book. Mr. Gollancz's organisation is definitely propagandist, devoted to giving 50,000 readers every month, at a cost of 2S. 6d., a book of fact or theory on the most serious and fundamental problems of the day ; and, whatever else may be said, the" success of his enterprise has revealed a hunger for knowledge and information which until now has remained unsatisfied. It would be extremely useful to know how many of these readers belong to the wage- earning class.

Mr Lane's Penguin and. Pelican books belong to a somewhat different category. That there should be, a large public for good novels at the price of 6d. is not surprising, especially when they have already achieved success when published at a higher price. The reissue of books like Typee or Pride and Prejudice at 6d. continues the policy of republishing the classics cheaply followed by a host of successors to Newnes' famous 3d. and 6d. classics. The publication of new books like Mme, Tabouis' Blackmail or War or Mr. Garratt's Mussolini's Roman Empire, may in some respects be considered as an extension of the daily newspaper and a result of the present overwhelming interest in foreign affairs. But none of these explanations account for the production, at the same price of 6d., of new editions, in the Pelican series, of such books as Tawney's Religion and the Rise of Capitalism, of Hal evy's great History of the English People, of Freud's Psychopathology of Everyday Life. These are all books which, each in its own way, have helped to make the intellectual history of this century ; until now mere considerations of cost have placed them out of the reach of most people. That now they can be bought for 6d., that is, for the price of a cheap cinema seat or a packet of cigarettes, is a fact of enormous importance in the struggle to overcome economic restrictions to knowledge ; and it is one more indication of the hunger for information, for fact, for explanation, which exists unsatisfied at the present time. If there is any sense in saying that the culture of the world should be accessible to all without distinction of wealth, such publications are helping to make it true. And they have the peculiar and additional value of overcoming the time-lag which has hitherto existed between the discovery of new knowledge and its absorption by the great mass of the people. In this way they should have a decisive influence on the growth of popular understanding of the world.

Yet such changes not only help to solve old problems but create new ones. The publication of works of the highest standard at the lowest price will not only affect the public ; it must have serious reactions on the pub- lishing trade itself and on the whole technique of book production. The cheap books which are now on the market are, for the most part, old books, and they directly compete with the publication of new ones which have to bear the cost not only of printing, binding, and distribution, but of giving a living wage to the author. The cheap 6d. book takes advantage of technical ad- vances in book production, making reduction in costs possible, but it makes no direct provision for the writing of new books of lasting value ; and by competing with books of the 7s. 6d. class it even makes it more difficult for that provision to be made. There seems to be no doubt that the result of such competition must in the end be to force a reduction in the price of all books, new and old, and such a change is overdue and will certainly be for the good. But it will be attended by considerable dislocation, and may have unfortunate results, especially for the publisher and the writer, unless it can be carried out by agreement and by some carefully planned policy for the book trade as a whole. If such a policy can be evolved, a revolution may be worked in the reading, writing, and distributing of books which will have the most far-reaching and beneficial effects. The ultimate interest of publisher, writer and reader alike is that there should be the greatest possible extension of the market for books, and it seems certain that a great extension is now possible. The greatest obstacle, and the greatest limitation on an increase of the market, is the factor of cost ; and it seems clear that a reduction of cost is possible. Those who have found it possible to make that -reduction have been amply rewarded by the popular demand that has been created, but so far reduced costs appear to have operated only in a limited sphere. When they have been applied to the whole range of book production, it may be hoped that the influence of books on the public will be enormously increased ; and -the cultural benefit to the life of the nation will be immense.