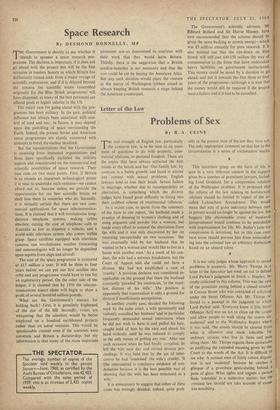 By DESMOND DONNEL.LY, MP THE Government is shortly to say whether it intends to sponsor a space research pro- gramme. The decision is important; if it does not go ahead with the project this will be the first occasion in modern history in which Britain has deliberately turned aside from a major voyage of scientific exploration; and if it is delayed beyond the autumn the scientific teams (assembled originally for the Blue Streak programme) will have dispersed, as many of the best personnel are offered posts at higher salaries in the US.

The major case for going ahead with the pro- gramme has been military. In the past, political influence has always been associated with con- • trol of land and sea : in future, it may depend upon the patrolling of space surrounding the Earth. Indeed, the present Soviet and American space programmes are closely connected with attempts to break the nuclear deadlock.

But the representations that the Government is receiving from interested organisations and firms have specifically excluded the military aspects and concentrated on the commercial and scientific possibilities of space research. Their case rests on two main points. First, if Britain is to remain an important technological power it is vital to undertake such ventures—we cannot Ilford not to, because unless we provide the opportunities for our best scientific brains we shall lose them to countries who do. Secondly, t is virtually certain that there are vast com- mercial applications for space telecommunica- tions. It is claimed that it will revolutionise long- listance telephone systems, making cables obsolete, cutting the cost of telephone calls to Australia as low as sixpence a minute; and a Norld-wide television system also comes within grasp. Space satellites equipped with television :ameras can revolutionise weather forecasting and meteorologists will no longer be dependent Ipon reports from ships and aircraft.

The cost of the space programme is estimated as f15 million a year. It will be three to four years before we can put our first satellite into orbit and any programme would have to run for in exploratory period. On the other side of the ledger, it is claimed that by 1970 the telecom- munications aspect alone will begin to show a profit of several hundred million pounds.

What are the Government's reasons for holding back? First, it is genuinely frightened of the size of the bill. Secondly, voices are whispering that the scientists would be better employed on a hundred earthbound projects father than on astral ventures. This would be questionable counsel even if the scientists were automata and Britain a dictatorship, but my information is that many of the more important personnel are, so determined to continue with their work that they would leave Britain. Thirdly, there is the suggestion that a British satellite-launcher is not necessary and that the cost could be cut by buying the American Atlas. But any such decision would place the venture at the mercy of Washington lobbies aimed at always keeping British research a stage behind the American counterpart. The Government's scientific advisers, S Edward Bullard and Sir Harrie Massey, has now recommended that the scheme should given the same, backing as atomic energy—whic was £5 million annually for pure research. It also pointed out that the run-down on Blt Streak will still cost L40-£50 million (by way ( compensation to the firms that have undertake heavy liabilities on government instructions This money could be saved by a decision to g ahead, and put it towards the first three to fot years of the programme—although it is true the the money would still be required if the projel were a failure and if it had to be cancelled.

it is ie tf