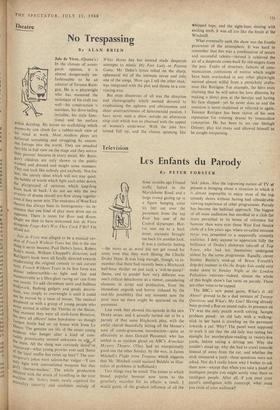 By ALAN BRIEN Joie de Vivre..(Queen's.) IN the climate of avant- garde opinion, it is almost dangerously Un- -\ fashionable to be an admirer of Terence Ratti- gan. He is a playwright who has_ mastered the technique of his craft too well—his construction is seamless, his dove-tailing invisible, his style func- tional and his surface Polish dazzling. He leaves no scaffolding which Passers-by can climb for a rubber-neck view of his mind at work. Most modern plays are delivered screaming and struggling by enorm- ous forceps into the world. They are smacked Into life in full view on the stage and they mirror their parents' features in every detail. Mr. Rani- gan's children are only shown to the public washed and dressed and taught some manners. They can look like nobody and anybody. Not for him, the unruly ideas which will not stay quiet, the babble of words which fight each other down, the playground of opinions which leap-frog from back to back. I do not see why the two streams of drama should not flow along together even if they never mix. The weakness of West End theatre has always been its homogeneity—its in- sistence that one kind of play must drive out its °PPosite. There is room for Ross and Roots. Ought we then to have welcomed Joie de Vivre alongside Fings Ain't Wot They Used T'Be? I'm afraid not.

Joie de Vivre was alleged to be a musical ver- sion of French Without Tears but this is the one thing it never became. Paul Dehn's lyrics, Robert Stolz's music. William Chappell's direction, and Rattigan's book were all fatally directed towards Modernising the original comedy to suit current taste. French Without Tears in its first form was almost indestructible—as light and fast and rnanceuvrable as a fibre-glass racing car cast from one mould. To add chromium teeth and bulbous bodywork, flashing gadgets and gaudy decora- tl°ns, was simply to overweight it until it could not be moved by a team of horses. The musical Presented us with a group of young people who never existed in either the Thirties or the Sixties. One moment they were all sixth-form flirtation, the next all officers' mess bawdiness—as though Lampot Smith had set up house with Irma La Douce. The genuine sex life of the smart young Moderns who hunger after a kind of com- radely promiscuity seemed unknown to arikoif the team. All the slang was curiously date& or Inaccurate—what young prowler ever said 'Some 13: the local muffin has come up here'? The con- einPorary jokes were salo-on-bar vulgar—'I can only fight with conventional weapons but that girl's thermo-nuclear.' The whole production shivered with the strain of travelling in the time Machine. Mr. Stolz's music rarely captured the schmaltzy sincerity and confident melody of White Horse Inn but instead made desperate attempts to mimic My Fair Lady or ,Pajama Game. Mr. Dehn's lyrics relied on the sharp, ephemeral wit of the intimate revue and only one of the songs, 'How con I tell the other man,' was integrated with the plot and theme in a con- vincing way.

But most disastrous of all was the direction and choreography which seemed devoted to emphasising the ugliness and obviousness and sheer unattractiveness of .heterosexual passion. I have never seen a show outside an afternoon ,strip club which was so obsessed with the appeal of women's underwear. With the juke box turned full up, and the 'chorus spinning like whipped tops, and the sight-lines shining with smiling teeth, it was all too like the finale at the Windmill.

What eventually sank the show was the frantic pessimism of the atmosphere. It was hard to remember that this was a combination of secure and successful talents—instead it achieved the air of a desperate come-back by old-stagers from the past. Faults of structure, failures of com- munication, confusions of motive which might have been overlooked in any other playwright seemed almost wilful from a pernickety crafts- man like Rattigan. For example, the hero exits claiming that he will solve his love dilemma by making a direct pass at the heroine and having his face slapped—yet he never does so and the omission is never explained or referred to again. Terence Rattigan has been victim of his own reputation for creating drama by immaculate conception. He has been to see one Shelagh Delaney play too many and allowed himself to be caught trespassing.