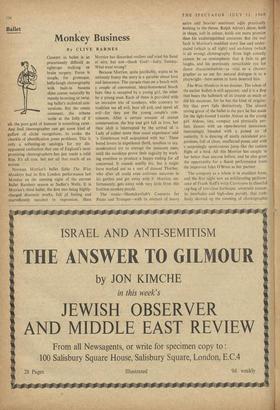 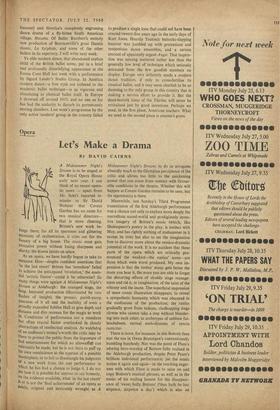 Morrice has discarded realism and tried his hand at airy, but not—thank God!—fairy, fantasy. What went wrong?

Because Morrice, quite justifiably, wants to be seriously funny the story is a parable about love and innocence. The curtain rises on a beach with a couple of convenient, ideal-homestead beach huts. One is occupied by a young girl, the other by a young man. Each of them is provided with an intrusive trio of monkeys, who contrary to tradition see all evil, hear all evil, and speak all evil—for they are the young couple's con- sciences. After a certain amount of simian consternation, the boy and girl fall in love, but their idyll is interrupted by the arrival of 'a Lady of rather more than usual experience' and 'a Gentleman well acquainted with her.' These bored lovers in experience (both, needless to say, monkeyless) try to corrupt the innocent ones, until the monkeys prove their sagacity by work- ing overtime to produce a happy ending for all concerned. It sounds nuttily fey, but it might have worked out as a sort of danced Thurber, who after all could even cultivate unicorns in his garden and get away with it. Morrice, un- fortunately, gets away with very little from this fruitless monkey puzzle.

The music—Shostakovitch's Concerto for Piano and Trumpet—with its mixture of heavy satire and heavier sentiment adds practically nothing to the theme. Ralph Adron's decor, bold in shape, soft in colour, holds out more promise than his undistinguished costumes. But the real fault is Morrice's muddled story line and under- stated (which is all right) and un-funny (which is all wrong) choreography. Even high comedy cannot be so stratospheric that it fails to get laughs, and his previously remarkable eye for dance characterisation—as vital to a choreo- grapher as an ear for natural dialogue is to a playwright--here seems to have deserted him.

The Wise Monkeys is no disaster. The talent of the earlier ballets is still apparent, and it is a flop that bears the hallmark of its creator as much as did his successes, for he has the kind of origina- lity that even fails distinctively. The almost saving grace of the ballet is the part he has made for the light-footed Lucette Aldous as the young girl. Aldous, tiny, compact and physically per- fect, dances with an open-hearted innocence, interestingly blended with a poised air at maturity. It is dancing of nicely calculated pro- portions, full of clean, unaffected poses, and with a surprisingly spontaneous jump like the sudden flight of a bird. All this Morrice has caught her better than anyone before, and he also gives the opportunity for a fluent performance from the improved John O'Brien as her partner.

The company as a whole is in excellent form, and the first night saw an exhilarating perform- ance of Frank Staff's witty Czernyana (a cheerful rag-bag of low-class burlesque, uncertain roman- tic interludes and high-class parody, that ruth- lessly showed up the meaning of choreographic humour) and Morrice's completely engrossing dance drama of a fly-bitten South American village, Hazaiia. Of Ballet Rambert's entirely new production of Bournonville's great Danish classic, La Sylphide, and some of the other ballets in its repertory, I will write next week.

Ye olde modern dance, that abandoned orphan child of the British ballet scene, put in a brief and profoundly dissatisfying appearance at the Emma Cons Hall last week with a performance by Sigurd Leeder's Studio Group. In America modern dance—a free style not tethered to the academic ballet technique—is as vigorous and stimulating as classical ballet itself. In Europe it drowsed off around 1935, and no one so far has had the audacity to disturb its portentously snoring slumbers. Last week's programme by the only active 'modern' group in the country failed to produce a single item that could not have been created twenty-five years ago in the early days of Kurt Jooss. Heavily Teutonic buttocks-slapping humour was jumbled up with pretentious and tendentious dance ensembles, and a certain amount of apparently urgent Angst. That inspira- tion was missing mattered rather less than the generally low level of technique which seriously detracted from the few goodish numbers on display. Europe very definitely needs a modern dance tradition, if only to cross-fertilise its classical ballet, and it may seem churlish to be so damning to the only group in this country that is making a serious effort to provide it. But the dead-beatnik ideas of the Thirties will never be revitalised just by good intentions. Perhaps we need, in the first place, American teachers. What we need in the second place is anyone's guess.