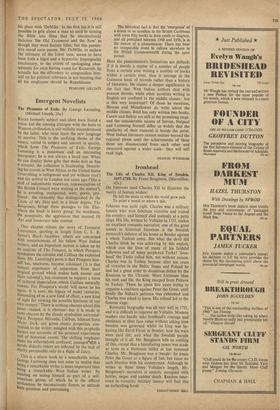 The Pleasures of Exile. By George Lamming. (Michael Joseph, 21s.) RACES formerly subject and silent have found a voice, but the ensuing dialogue with the heirs to Western civilisation is still wilfully misunderstood by the latter, who must learn the new language to survive. This is the unifying theme of the essays, varied in subject and uneven in quality, which form The Pleasures of Exile. George Lamming is a passionate and an interesting interpreter; he is not always a lucid one. When he can display those gifts that make him so fine a novelist, the collection is fascinating. Describ- ing his travels in West Africa, in the United States ('everything is indigenous and yet without root') and his arrival in London ten years ago ('like a staff of indomitable midwives, representatives of the British Council were waiting at the station'), he is arresting, unexpected, witty, poetic, pro- found: the virtuosity that distinguished In the Castle of My Skin and, to a lesser degree, The Emigrants, brings these passages to life. Else- Where the book is heavy going; the wordiness, the pomposity, the aggression that marred Of Age and Innocence take control.

One chapter relates the story of Toussaint Louverture, quoting at length from C. L. R. James's Black Jacobins; others are concerned With reminiscences of his fellow West Indian writers; and an important section is taken up by an analysis of The Tempest, in which Prospero symbolises the colonist and Caliban the exploited slave. Mr. Lamming's point is that Prospero him- self has, unawares, become colonised ('it is that mutual experience of separation from their original ground which makes both master and slave colonial'), but continues to support a form of cultural imperialism.which Caliban naturally resents. For Prospero's world 'will never be his again. It is ours, the legacy of many centuries, demanding of us a new kind of effort, a new kind of sight for viewing the possible horizons of our own century.' There is nothing obscure about this Point—indeed, it is obvious—but it is made to seem obscure by the cloudy symbolism surround- ing it. Prospero, Miranda, Caliban, Ishmael from Moby Dick, are given elastic properties con- venient to the writer; mingled with this prophetic licence are accounts of his personal experiences and of historical events. The shifting emphases Make his exhortations confused; passageiwith a Purely didactic intent are infected by the lack of clarity permissible only in a flight of fancy.

This is a minor book by a remarkable writer. George Lamming does not seem to realise that being a remarkable writer is more important than being a remarkable West Indian writer. By Insisting on seeing himself as part of a self- conscious group, of which he is the official spokesman, he unconsciously fosters an attitude both pointless and patronising. The historical fact is that the 'emergence' of a dozen or so novelists in the British Caribbean with some fifty books to their credit or disgrace, and all published between 1948 and 1958, is in the nature of a phenomenon. There has been no comparable event in culture anywhere in the British Commonwealth during the same period.

Here the phenomenon's limitations are defined; if it is merely a matter of a number of people from a certain area writing a number of books within a certain time, then it belongs .in the Guinness book of records rather than a history of literature. He claims a deeper significance in the fact that West Indian authors deal with peasant themes, while other novelists writing in English are confined to the middle classes: but is this very important? Of those he mentions, Hearne and Mittelholzer do write about the middle classes, Reid has only written two books, Carew and Salkey are still at the promising stage, and the considerable talents of Selvon, Naipaul and Lamming himself differ so widely that the similarity of their material is beside the point. West Indian literature cannot mature beyond the regional phase until the achievements of these three are disassociated from each other and measured against a wider scale: they will still rank high.