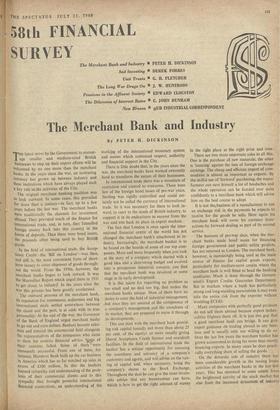 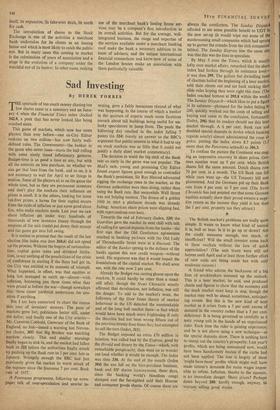 The Merchant Bank and Industry • PETER H. DICKINSON Sad Investing • DEREK FORBES Unit Trusts -• G. H. FLETCHER The Long War Drags On • J. W. HUNTRODS Pensions in the Affluent Society • EDWARD CLOUSTON The Dilemma of Interest Rates • C. JOHN DUNHAM New Broom ° OUR INDUSTRIAL CORRESPONDENT The Merchant Bank and Industry By PETER H. DICKINSON THE latest move by the Government to encour- age smaller and medium-sized British businesses to step up their export efforts will be Welcomed by no one more than the merchant banks. In the years since the war, an increasing intimacy has grown up between industry and these institutions which have always played such a key role in the activities of the City.

The original merchant banking tradition was to look outward. In some cases, this prevailed for more than a century—in fact, up to a few Years before the last war. The merchant banks were traditionally the channels for investment abroad. They provided much of the finance for international trade, and, in turn, they funnelled foreign money back into this country in the forms of deposits. Then there were bond issues, the proceeds often being used to buy British goods, In the field of international trade, the Accep- tance Credit—the 'Bill on London'—was then, and still is, the most convenient form of short- term money to cover shipment of goods through- out the world. From the 1930s, however, the merchant banks began to look inward. It was the Macmillan Report which urged them in 1931 to get closer to industry'. In the years since the War this process has been greatly accelerated.

The outward persona of the merchant bank, , its reputation for remoteness, sedateness and big international deals settled somewhere between the claret and the port, is at odds with its true Personality. At the end of the war, the Governor of the Bank of England urged merchant banks to go out and earn dollars. Bankers became sales- men and entered the commercial field alongside the representatives of the companies who came to them for esoteric financial advice. Sjue of their ventures failed. Some of thernI were immensely successful. From one of them, for instance, Hambros Bank built up the car business in America which has so far notched up sales in excess of £100 million. In this the bankers learned sympathy and understanding of the prob- lems of their commercial clients and to this sympathy they brought powerful international financial connections, an understanding of the_ working of the international monetary system and names which command respect, authority and financial support in the City.

There is little doubt that, in the years since the war, the merchant banks have worked extremely hard to transform the nature of their businesses. In international trade there was a mountain of restriction and control to overcome. There were few of the foreign bond issues of pre-war years.

Sterling was rigidly controlled and could cer- tainly not be called the currency of international trade. So it was necessary for them to look in- ward, to cater to the needs of British industry, to support it in its endewOours• to recover from the war and win back its place in export markets.

The fact that London is once again the inter- national financial centre of the world has not changed the merchant bank's attachment to in- dustry. Increasingly, the merchant banker is to be found on the boards of some of our top com- panies. More and more frequently when you look at the story of a company which started with a good idea and a shoe-string budget and evolved into a prosperous industrial concern, you •find that the merchant bank was involved at some stage in its early development.

It is this talent for regarding no problem as too small and no deal too big, that makes the merchant banks unique. Most of them have no desire to enter the field of industrial management, but once they are assured of the competence of a company's management and the soundness of its market, they are prepared to nurse it through its developments.

This can start with the merchant bank provid- ing risk capital (usually not more than about, 25 per cent. of the equity) or more usually giving liberal Acceptance Credit finance and overdraft facilities. In the field of international trade the banker has a unique opportunity for assessing the soundness and solvency of a company's customers and agents, and will advise on the rais- ing of capital and, when necessary, bring the company's shares to the Stock Exchange.

Throughout the deal he can give the most invalu- able advice that any businessman can have, which is how to get the right amount of money in the right place at the right price and time.

There are two more important sides to all this. One is the purchase of raw materials; the other is 'insuring' against the loss of foreign exchange earnings. The cheap and efficient import of com- modities is almost as important as exports. By the skilful use of 'forward' purchasing, the manu- facturer can save himself a lot of headaches and the whole operation can be handed over quite confidently to a merchant bank which will advise him on the best course. to adopt It is not the,business of a manufacturer to run an exchange risk in the payments he expects to receive for the goods he sells. Here again his merchant bank will cover his currency trans- actions by forward dealing as part of its normal service.

The business of pre-war days, when the mer- chant banks made bond issues for financing foreign government and public utility projects, has not returned to London. The merchant bank, however, is increasingly being used as the main source of finance for capital goods exports, particularly for medium-term credits where the merchant bank is well fitted to head the banking syndicates. Much is done through the Govern- ment's Export Credits Guarantee Department. But in markets where a bank has particularly strong and long-standing associations it may even take the entire risk from the exporter without troubling ECGD.

Many companies with perfectly good products do not sell them abroad because export techni- calities frighten them otl. It is just this gap that a good merchant bank can bridge. It can give expert guidance do trading abroad to any busi- ness and is usually only too willing to do so. Over the last few years the merchant banker has grown accustomed to doing far more than merely financing exports. In many cases he does practi- cally everything short of selling the goods.

On the domestic side of industry there has been considerable growth in the issuing house activities of the merchant banks in the last few years, This has stemmed to some extent from- the heightened activity of the stock market but also from the increased dynamism of industry itself, its expansion, its take-over deals, its needs for cash.

The introduction of shares to the Stock Exchange is one of the activities a merchant bank undertakes for its clients as an issuing house and which is most likely to catch the public eye. But in many cases this coming to market is the culmination of years of association and a stage in the evolution of a company under the watchful eye of its banker. In other cases, making use of the merchant bank's issuing house ser- vices may be a company's first introduction to its overall activities. But for the average, well- integrated business, the range and expertise of the services available under a merchant banking roof make the bank a necessary addition to its team of advisers, and the unique international financial connections and know-how of some of the London houses make an association with them particularly valuable.