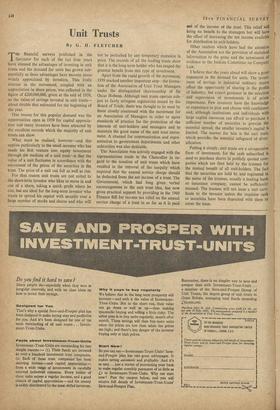 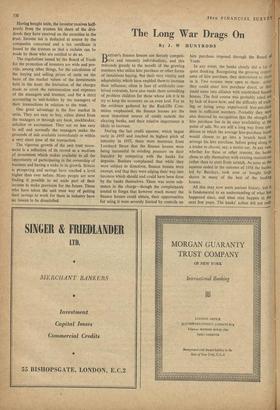 THE financial surveys published in the Spectator for each of the last four years have stressed the advantages of investing in unit trusts and the demand for units has grown sub- stantially as these advantages have become more widely appreciated by investors. This lively interest in the movement, coupled with an appreciation in share prices, was reflected in the figure of £200,000,000, given at the end of 1959, as the valuer of savings invested in unit trusts— about double that estimated for the beginning of the year.

One reason for this popular demand was the opportunities open in 1959 for capital apprecia- tion and many investors have been attracted by the excellent records which the majority of unit trusts can show.

What must be realised, however—and this applies particularly to the small investor who has made his first venture into equity investment through the medium of a unit trust—is that the value of a unit fluctuates in accordance with the movement of the prices of the securities in the trust. The price of a unit can fall as well as rise.

For that reason unit trusts are not suited to the short-term investor who likes to move in and out of a share, taking a quick profit where he can, but are ideal for the long-term investor who wants to spread his capital with security over a large number of stocks and shares and who will not be perturbed by any temporary recession in price. The records of all the leading trusts show that it is the long-term holder who has reaped the greatest benefit from this type of investment.

Apart from the rapid growth of the movement, 1959 marked another important step—the forma- tion of the Association of Unit Trust Managers under the distinguished chairmanship of Sir Oscar Hobson. Although unit trusts operate sub- ject to fairly stringent regulations issued by the Board of Trade, there was thought to be need by those closely concerned with the movement for an Association of Managers in order to agree standards of practice for the protection of the interests of unit-holders and managers and to maintain the good name of the unit trust move- ment. A channel for communication and repre- sentation to government departments and other auhtorities was also desirable.

The Association was actively engaged with the representations made to the Chancellor in re- gard to the taxation of unit trusts which have resulted in the removal of the inequity which required that the annual service charge should be deducted from the net income of a trust. The Government, which had long given verbal encouragement to the unit trust idea, has now given practical support by providing in the 1960 Finance Bill for income tax relief on the annual service charge of a trust in so far as it is paid out of the income of the trust. This relief will bring no benefit to the managers but will have the effect of increasing the net income available for distribution to unit-holders.

Other matters which have had the attention of the Association are the provision of statistical information to the press and the submission of evidence to the Jenkins Committee on Company Law.

I believe that the years ahead will show a great expansion in the demand for units. The invest- ment of savings in industrial ordinary shares offers the opportunity of sharing in the profits of industry; but expert guidance in the selection and supervision of investments is of prime importance. Few investors have the knowledge or experience to pick and choose with confidence and, although institutions and individuals with large capital resources can afford to purchase a sufficient number of securities to provide the essential spread, the smaller investor's capital is limited. The answer for him is the unit trust, which provides the essential safeguard of diver- sification.

Putting it simply, unit trusts are a co-operative form of investment, for the cash subscribed is used to purchase shares in publicly quoted com- panies which are then held by the trustees for the mutual benefit of all unit-holders. The fact that the securities are held by and registered in the name of the trustees, usually a leading bank or insurance company, cannot be sufficiently stressed. The trustees will not issue a unit certi- ficate to the investor unless the requisite cash or securities have been deposited with them to cover the issue. Having bought units, the investor receives half- yearly from the trustees his share of the divi- dends they have received on the securities in the trust. Income tax is deducted at source by the companies concerned and a tax certificate is issued by the trustees so that a reclaim can be made by those who are entitled to do so.

The regulations issued by the Board of Trade for the protection of investors are wide and pro- vide, among other things, for the calculation of the buying and selling prices of units on the basis of the market values of the investments held in the trust; the limitation of the charges made to cover the remuneration and expenses of the managers and trustees; and for a strict accounting to unit-holders by the managers of their transactions in relation to the trust.

One great advantage is the free market in units. They are easy to buy, either direct from the managers or through any bank, stockbroker, solicitor or accountant. They are no less easy to sell and normally the managers make the proceeds of sale available immediately or within a very short time of the transaction.

The vigorous growth of the unit trust move- ment is a reflection of its record as a medium of investment which makes available to all the opportunity of participating in the ownership of business and having a stake in its growth. Britain is prospering and savings have reached a level higher than ever before. Many people are now finding it possible to set aside part of their income to make provision for the future. Those who have taken the unit trust way of putting their savings to work for them in industry have no reason to be dissatisfied.