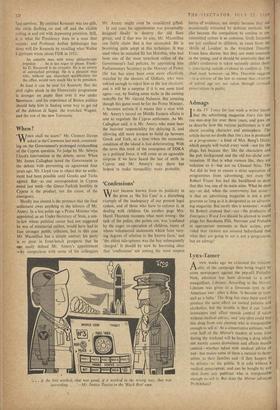 'WHEN shall we learn?' Mr. Clement Davies asked in the Commons last week, comment- ing on the Government's prolonged mishandling of the Cyprus question. To judge by Mr. Selwyn Lloyd's intervention in the debate, never. When Mr. James Callaghan taxed the Government in the debate with preventing an agreement four years ago, Mr. Lloyd rose to object that no settle- ment had been possible until Greeks and Turks agreed. But—as our correspondent in Cyprus noted last week—the Greco-Turkish hostility in Cyprus is the product. not the cause, of the emergency.

Hardly less absurd is the pretence that the final settlement owes anything to the labours of Mr. Amery. In a less polite age a Prime Minister who appointed, as an Under-Secretary of State, .a son- in-law whose political career had not suggested he was of ministerial calibre, would have had to face stronger public, criticism, but in this case Mr. Macmillan has a simple answer; his party is so poor in front-bench prospects that he can easily defend Mr. Amery's appointment —by comparison with some of his colleagues . . if the hox worked, that was good; if it worked in the wrong way, that interesting. . . .'—Mr. Justice Davies in the 'Black Box' case.

In any case, his appointment was presumably designed finally to destroy the old Suez group; and if that was its aim, Mr. Macmillan can fairly claim that it has succeeded. He is becoming quite adept at this technique. It was used when he muzzled Sir Ian Horobin, who had been one of the most trenchant critics of the Government's fuel policies, by appointing him Parliamentary Secretary to the Minister of Power (Sir Ian has since been even more effectively muzzled by the electors of Oldham, who were unkind enough to reject him at the last election): and it will be a surprise if it is not soon tried again—say, by finding some niche in the coming reshuffle for Mr. Gerald Nabarro. But amusing though this game must be for the Prime Minister, it becomes serious if it means that a man with Mr. Amery's record on Middle Eastern affairs is sent to negotiate the Cyprus settlement. As Mr. Callaghan said, it is Mr. Amery who must bear the heaviest responsibility for delaying it, and allowing still more tension to build up between Greek and Turk, at a time when the economic condition of the island is fast deteriorating. With the• news this week of the resurgence of EOKA as a political force, it will come as an agreeable surprise if we have heard the last of strife in Cyprus and Mr. Amery's stay there has helped to make tranquillity more probable.