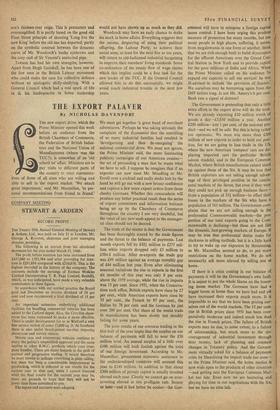 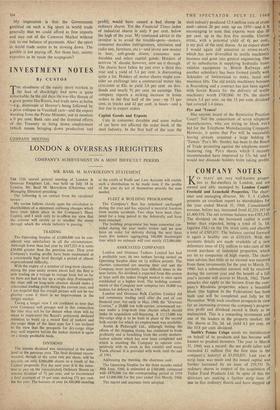 We must get together 'a great band of merchant adventurers.' Perhaps he was taking seriously the complaint of the Economist that the ennobling of so many industrial families had resulted in `devulgarising and thus de-energising' the national commercial drive. We must not ignore, the Prime Minister said, the more fascinating publicity campaigns of our American cousins— the art of persuading a man that he wants what we have to sell. I suppose he imagines that if an exporter can now meet Mr. Maudling or Mr. Erroll over a cocktail and really shake him by the hand he will go out with a new brassy confidence and capture a few more export orders from those cheeky Germans. Whether this camaraderie will produce any better practical result than the series of export committees and information bureaux being set up by the Chambers of Commerce throughout the country I am very doubtful, but the value of any new snob appeal to the manager- ial class should not be decried.

The truth of the matter is that the Government has been thoroughly scared by the trade figures and the threat to the balance of payments. Last month exports fell by £42f million to £275 mil- lion while imports dropped only £5 million to £384.4 million. After re-exports the trade gap was £99 million against an average monthly gap of £44 million last year. Even after eliminating seasonal variations the rise in exports in the first six months of this year was only 8 per cent. above the 1959 average, while the rise in imports was 13 per cent. Since 1951, when the Conserva- tives took office, British exports have risen by 27 per cent., while American exports have risen by 33 per cent., the French by 85 per cent., the Italian by 78 per cent. and the German by just over 200 per cent. Our share of the world trade in manufactures has been slowly but steadily falling for some years.

The poor results of our overseas trading in the first half of the year imply that the surplus on our balance of payments will fall to near the £50 million level. An annual surplus of a little over £100 million will look foolish against the total of our foreign investment. According to Mr. Macmillan, government economic assistance to the underdeveloped countries will amount this year to £140 million. In addition to that about £300 million of private capital is usually invested abroad each year. Clearly we cannot go on over- investing abroad at this profligate rate. Sooner or later—and it had better be sooner—the Gov- ernment will have to reimpose a foreign capital issues control. I have been urging this prudent measure of protection for many months, but too many people in high places, suffering, it seems, from megalomania in one form or another, think that we are rich enough both to build skyscrapers for the affluent Americans over the Grand Cen- tral Station in New York and to provide capital for the poor millions of India and Africa. When the Prime Minister called on his audience 'to expand our capacity to sell our services' he was ill-advised-to include 'the provision of finance.' We ourselves may be borrowing again from the IMF before long. Is not Mr. Amory's 6 per cent. Bank rate a signal of distress?

The Government is pretending that only a little extra effort in the export drive will do the trick. We are already exporting £10 million worth of goods a day—£3,650 million a year. Another £200 million—just 1 per cent. of the national pro- duct—and we will be safe. But this is being rather too optimistic. We must win more than £200 million of new exports in order to hold our posi- tion, for we are going to lose trade in the US, where the new American 'compact' cars are dis- placing imported cars (in particular British saloon models), and in the European Common Market, where British manufactures cannot stand up against those of the Six. It may be true that British exporters are not taking enough advan- tage of their privileged position in the contin- ental markets of the Seven, but even if they were they could not pick up enough business there- from a population of 351 million—to offset their losses in the markets of the Six who have a population of 161 million. The Government com- plains that we are not selling enough in the preferential Commonwealth markets—the pro- portion of our total exports going to the Com- monwealth is declining—but these are not like the dynamic, fast-growing markets of Europe. It may be true that preferential duties make for slackness in selling methods, but it is a little hard to try to wake up our exporters by threatening, as Mr. Macmillan seemed to do, to put more restrictions on the home market. We do not necessarily sell more abroad by selling less at home.

If there is a crisis coming in our balance of payments it will be the Government's own fault. It is unjust to put the whole blame on the boom- ing home market. The Germans have had a bigger boom at home than we have had and yet have increased their exports much more. It is impossible to say that we have been priCing our- selves out of the world markets. The 12 per cent. rise in British prices since 1951 has been com- paratively moderate and indeed much less than the rise in French prices. The failure of British exports may be due, to some extent, to a failure of salesmanship, but much more to the dis- couragement of industrial investment through dear money, lack of planning and constant changes in Treasury policy. And the Govern- ment virtually-asked for a balance of payments crisis by liberalising the import trade too soon— as the Prime Minister said, the home market is now wide open to the products of other countries —and getting into the European Common Mar- ket too late. Even now we are hesitating and playing for time in our negotiations with the Six, but we have no time left.

My impression is that the Government gambled on such a big spurt in world trade generally that we could afford to free imports and stay out of the Common Market without risk to our balance of payments. Alas! the spurt in world trade seems to be slowing down. The gamble is not paying off. Are those lazy, snooty exporters to be made the scapegoats?