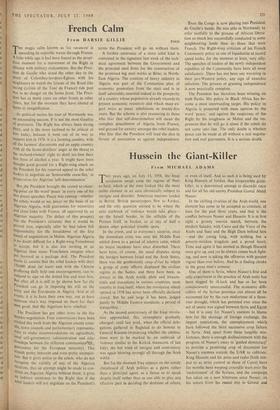 From DARSIE GILLIE THE magic calm known as 'les vacances' is spreading its soporific waves through France. A little while ago it had been feared as the propi- tious moment for a movement of the Right in alliance with military malcontents. But the Presi- dent de Gaulle who stood the other day in the street of Colombey-les-deux-Eglises with his neighbours to watch the Giants of the Road (the racing cyclists of the Tour de France) ride past Was in no danger on the home front. The Presi- dent has as many cares on other fronts as other rulers, but for the moment they have abated at home to insignificance.

But the President brought the crowd to cheer- ing-point on the word 'peace' in every one of his two dozen speeches. Peace was coming—whether the rebels would or no, peace on the basis of an Algerian Algeria, with guarantees for minorities and close links with France, all approved by an Algerian majority. The defect of this prospect was the President's certainty that it would be Proved true, especially after he had taken full responsibility for the breakdown of the first round of negotiations in Melun. Algerian Algeria is no doubt difficult for a Right-wing Frenchman to accept, but it is also less inviting to an Algerian than many Frenchmen imagine when Pot forward as a package deal. The President seems to assume that the rebel leaders with their 150,000 dead (at least) and with the Chinese proffering daily help and encouragement, tan be induced to sign on the dotted line and trust him. But after all it is still to De shown how far the President can go in imposing hiS Will on the army and the Europeans in Algeria. And at all events, it is to have their own way, not to have someone else's way imposed on them for their Own good, that the Algerians have rebelled. • The President has got other irons in the fire besides negotiation. Four commissions have been created this week from the Algerian county coun- cils, town councils and parliamentary representa- tives to make recommendations on agriculture, local self-government, administration and rela- tionships between the different communitics(., guarantees for the European minority). This sounds pretty innocent and even pretty unimpor- tant. Hut it gives notice to the rebels, who do not recognise the validity of any of the Algerian elections, that an attempt might be made to con- struct an.Algerian Algeria without them; it gives an indirect assurance to the Right that if the rebel leaders will not negotiate on the President's

A further, assurance of a more solid kind is contained in the signature last week of the tech- nical agreement between the Government and the principal steel firms for the construction of the promised big steel works at Bone, in North- East Algeria. The creation of heavy industry in Algeria was part of the Constantine plan of economic promotion from the start and is in itself admirable, essential indeed to the prosperity of a country whose population already exceeds its present economic resources and which must ex- pect twice as many inhabitants in twenty-five years. But the scheme is also reassuring to those who fear that self-determination will mean the complete detachment of Algeria from France, and ground for anxiety amongst the rebel leaders, who fear that the President will load the dice in favour of association as against independence. Even the Congo is now playing into President de Gaulle's hands. He was able in Normandy to refer tactfully to the process of African libera- tion so much less successfully conducted in some neighbouring lands than .in those that were French. The Right-wing criticism of his French Community policy as one of liquidation at record speed looks, for the moment at least very silly. The speeches of leaders of the newly independent republics of the Community have been all most satisfactory. There has not been any wavering in their pro-Western policy, any sign of anarchic infection. The process of granting independence is now practically complete.

The President has therefore been winning on both flanks. His policy in Black Africa has be- come a most unrewarding target. His policy. in Algeria is protected with mass opinion by the word 'peace,' and against the suspicions of the Right by his toughness at Melun and the im- pression that he will go it alone if the rebels do not come into line. The only doubt is whether peace can be made at all without a real negotia- tion and real guarantees. It is a serious doubt.