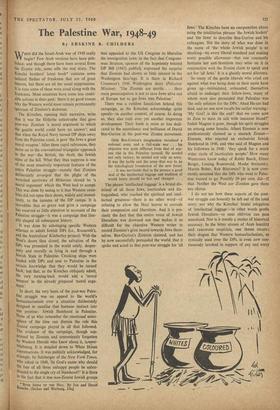 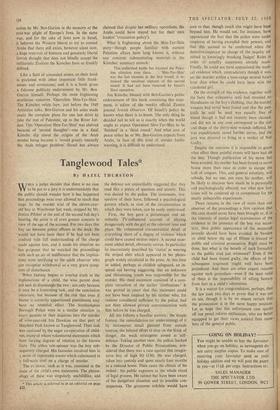 the Israel-Arab war of 1948 really begin? Few Arab versions have been pub- lished; and though there have been several from the Zionist side, none tells the real story. The Kimche- brothers' latest books contains some isolated flashes of frankness that are of great interest, but there are all the usual suppressions. It is time some of these were aired along with the frankness. Most countries have some less credit- able actions in their past : there is no good reason why the Western world must remain permanently Ignorant of Zionism's skeletons.

The Kimches, opening their narrative, write that it was the Hitlerite catastrophe that gave post-war Zionism 'a moral argument to which the gentile world could have no answer'; and that when the Royal Navy turned DP ships away from the Palestine coast, it gave 'the Jews a great moral weapon.' After these rapid references, they move on to the conventional triangular approach to the war—the British, the Arab, the Jewish sides of the hill. What they thus suppress is one of the most massively important features of the entire Palestine struggle—namely that Zionism deliberately arranged that the plight of the wretched survivors of Hitlerism should be 'a moral argument' which the West had to accept. This was done by seeing to it that Western coun- tries did not open their doors, widely and immed- iately, to the inmates of the DP camps. It is Incredible that so grave and grim a campaign has received so little attention in accounts of the Palestine struggle—it was a campaign that liter- ally shaped all subsequent history.

It was done by sabotaging specific Western schemes to admit Jewish DPs (i.e., Roosevelt's, and the Australians' Kimberley project). With the West's doors thus closed, the salvation of the DPs was presented to the world solely, desper- ately and morally as lying in and through a Jewish State in Palestine.' Creaking ships were loaded with DPs and sent to Palestine in the certain knowledge that they would be turned back; but that, as the Kimches obliquely admit, the very turning-back would add a 'moral Weapon' to the already prepared 'moral argu- Thent.'

In short, the very basis of the post-war Pales- tine struggle was an appeal to the world's humanitarianism over a situation deliberately designed to canalise that humane instinct into one premise: Jewish Statehood in Palestine. None of us who remember the emotional atmo- sphere of the time can dismiss the role this Zionist campaign played in all that followed. The evidence of the campaign, though sup- Pressed by Zionists and conveniently forgotten by Western liberals who knew about it, isfaver- Whelming. It is detailed down to White House Conversations. It was publicly acknowledged, for example, by Sulzberger of the New York Times, Who asked in 1946, 'In God's name why should the fate of all these unhappy people be subor- dinated to the single cry of Statehood?' It is there in the fact that it was non-Zionist Jewish groups BOTH SIDES OP THE HILL. By Jon and David 4-uniche. (Seeker and Warburg, 25s.) that appealed to the US Congress to liberalise the immigration laws; in the fact that Congress- man Stratton, sponsor of the hopelessly belated DP Bill (1947) publicly expressed his surprise that Zionists had shown so little interest in the Washington hearings. It is there in Richard Crossman's 1946 Washington diary (Palestine Mission): The Zionists are terrific . . . their main preoccupation is not to save Jews alive out of Europe but to get Jews into Palestine.'

There was a ruthless fanaticism behind this campaign, as the Kimches acknowledge quite openly—in another context, of course. In doing so, they also rush over yet another important development. Their book is more or less dedi- cated to the ascendancy and brilliance of David Ben-Gurion in the post-war Zionist movement.

Only Ben-Gurion's imagination visualised a national army and a full-scale war . . . his

It was the battle and the army that was to be the (ideological) foundation of the new Israel.

. . . It was inevitable that in the process a good deal of the intellectual luggage and tradition of world Jewry should be lost and changed. • . .

The phrase 'intellectual luggage' is a brutal dis- missal of all those Jews, inarticulate and dis- tinguished, who reached the spiritual and intel- lectual greatness—there is no other word—of refusing to allow the Nazi horror to corrode their compassion and liberalism. And it is pre- cisely the fact that this entire voice of Jewish liberalism was drowned out that makes it so difficult for the objective Western writer to record Zionism's grim record towards Jews them- selves. Ben-Gurion's Zionism claimed, and has by now successfully persuaded the world, that it spoke and acted in that post-war struggle for 'all Jews.' The Kimches have no compunction about using the totalitarian phrases 'the Jewish leaders' and 'the Jews' to describe Ben-Gurion and his colleagues. Yet the story of what was done in the name of 'the whole Jewish people' is so shocking—by every liberal standard and making every possible allowance—that one constantly hesitates lest anti-Semitism may seize on it in conjunction with the Zionist claim to speak and act for 'all Jews.' It is a ghastly moral dilemma.

So many of the gentle liberals who cried out against what was being done in their name have given up—intimidated, exhausted, themselves afraid to endanger their fellow-Jews, many of whom were also persuaded that Palestine was 'the only solution for the DPs.' Ahad Ha-am had died, and no one now-recalls his earlier warning: 'My God! is this the end? that we come now to Zion to stain its soil with innocent blood?' Judah Magnes is gone, though his spirit struggles on among some Israelis. Albert Einstein is now posthumously claimed as a staunch Zionist— Einstein, who rejected an exclusivist Jewish Statehood in 1946, and who said of Magnes and his followers in 1948: 'they speak for a much wider circle of inarticulate people.' How many Westerners know today of Rabbi Baeck, Elmer Berger, Lessing Rosenwald, Moshe Smilansky, Martin Buber, Reb Binyomin? It is now com- monly assumed that the DPs who went to Pales- tine wanted to go. Possibly 30 per cent. did—if that. Neither the West nor Zionism gave them any choice.

I do not see how these aspects of the post- war struggle can honestly be left out of the total story; nor why the Kimches' brutal relegation of 'intellectual luggage'—in other words gentle Jewish liberalism—to neat oblivion can pass unnoticed. Nor is it merely a matter of historical accuracy. In the bitter stream of Arab hostility and rancorous suspicion, one theme recurs:1 their disgust that Western humanitarianism, so cynically used over the DPs, is even now con- tinuously invoked in support of any and every action by Mr. Ben-Gurion in the memory of the post-war plight of Europe's Jews. In the same way, and for the sake of Jews now in Israel, it behoves the Western liberal to try to remind Arabs that there still exists, however silent now, a huge reservoir of humane and genuinely liberal Jewish thought that does not blindly accept the militaristic Zionism the Kimches have so frankly defined.

Like a field of concealed mines, so their book is pocketed with other important little frank- nesses and revelations; and it is a book given a fulsome publicity endorsement by Mr. Ben- Gurion himself. Perhaps the most frightening revelation concerns 'Operation Shin-Tav-Shin.' The Kimches relate hew, just before the 1949 Armistice talks, Ben-Gurion and his aides made ready the complete plans for one last drive to take the rest of Palestine, up to the River Jor- dan. This 'Operation Shin-Tay-Shin' was shelved because of 'second thoughts'—one in a fatal Kimche slip about the origins of the Arab exodus being because it `would greatly intensify the Arab refugee problem' (Israel has always claimed that despite her military operations, the Arabs could have stayed but for their own leaders' evacuation policy').

What is. frightening about the Shin-Tav-Shin story—though people familiar with current Palestine affairs have long known it, without any concrete substantiating material—is the Kimches' summary remark: This unfinished battle has haunted the Pales- tine situation ever since. . . . `Shin-Tav-Shin' was the last element in the first round; it re- mained the unsolved element of the second round. It had not been removed by Israel's Sinai operation.

Jon Kimche, blessed with Ben-Gurion's public endorsement of this book containing this state• merit, is editor of the weekly official Zionist journal Jewish Observer. Of Israeli's policy he knows what there is to know, The only thing he decided not to tell us is exactly when the world ought to expect Operation Shin-Tav-Shin to be `finished' in a 'third round.' And what sort of peace either he or Mr. Ben-Gurion expects from Arabs, in face of this kind of sinister battle- warning, it is difficult to understand.