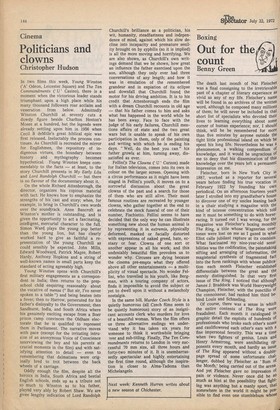 In two films this week, Young Winston ('A' Odeon, Leicester Square) and The Ten Commandments (' U ' Casino), there is a moment when the victorious leader stands triumphant upon a high place while his many thousand followers roar acclaim and veneration from below. Admittedly Winston Churchill at seventy cuts a dowdy figure beside Charlton Heston's Moses at a hundred, but the legends were already settling upon him in 1956 when Cecil B deMille's great biblical epic was first released. Ineluctably the process continues. As Churchill is recreated the mirror for Englishmen, the repository of indigenous virtues, the boundary between history and _ mythography becomes hypothetical. Young Winston keeps commendably to the facts — at least, to the story Churchill presents in My Early Life. and Lord Randolph Churchill — but there is no flavour of the documentary about it. On the whole Richard Attenborough, the director, organizes his copious material with tact. He knows how to emphasize the strengths of his :cast and story; when, for example, to bring in Churchill's own words over the soundtrack. Anne Bancroft as Winston's mother is outstanding, and is given the opportunity to act a fascinating, intelligent, mercurial character to the full. Simon Ward, plays the young pup better than the young lion, but has clearly worked hard to give as faithful a representation of the young Churchill as could, sensibly be expected. John Mills, Edward Woodward, Patrick Magee, Robert Hardy, Anthony, Hopkins and a string of well-known names in small parts keep the standard of acting agreeably high.

Young Winston opens with Churchill's first military engagements as a correspondent in India; then returns to the prepschool child enquiring reasonably about the vocative of mensa (" But sir, I've never spoken to a table ") and being beaten into a fever; then to Harrow, persecuted for his father's disloyalty to the Government; then Sandhurst, India, and South Africa where his genuinely exciting escape from a Boer prison camp convinces the Oldham electorate that he is qualified to represent them in Parliament. The narrative moves with pace (except for the irritating intrusion of an anonymous Voice of Conscience interviewing the boy and his parents at crucial moments in the film) and with satisfying attention to detail — even to remembering that dalmatians were originally bred to trot between the back wheels of a carriage.

Oddly enough the film, despite all the heroics in India, South Africa and bestial English schools, ends up as a tribute not so much to Winston as to his father, played very ably by Robert Shaw. We are given lengthy indication of Lord Randolph Churchill's brilliance as a politician, his wit, humanity, steadfastness and independence of mind, against which his slow decline into incapacity and premature senility brought on by syphilis (so it is implied) is all the more moving and horrifying. We are also shown, as Churchill's own writings demand that we be shown, how great an influence the father exercised upon the son, although they only ever had three conversations of any length; and how it was in emulation of the remembered grandeur and in expiation of its eclipse and downfall that Churchill found the motor for his driving ambition. It is to his credit that Attenborough ends the film with a dream Churchill recounts in old age — that his father comes to him and asks what has happened in the world while he has been away. Face to face with the judge of his early failures, Churchill mentions affairs of state and the two great wars but is unable to speak of his own participation in them, only of the painting and writing with which he is ending his days. "Well, do the best, you can" his father growls at him, turning away, dissatisfied as ever.

Fellini's The Clowns (' U ' Curzon) made for Italian television, comes into its own in colour on the larger screen. Opening with a circus performance as it might have been staged in Fellini's youth, it moves on to a sorrowful discussion about the great clowns of the past and a search for those of them who are still alive. Their most famous routines are recreated by younger clowns, who gather together at the end to celebrate the mock funeral of one of their number, Fischietto. Fellini seems to have decided that the only way he can illustrate something new about the human animal is ' by representing it in extremis, physically deformed, masked or facially distorted with expressions of naked greed, hate, ecstasy or. fear. Clowns of one sort or another appear in all his work; and this undeniably beautiful film provokes us to wonder why. Circuses are dying because the cinema pre-empts what they offered above all other entertainments — a multiplicity of visual spectacle. No wonder Fellini, who travelled in his youth, like Bergman, with a touring company of actors, finds it impossible to avoid the subject or yet to dwell upon it without a melancholy nostalgia.

In the same bill, Murder Czech Style is a quietly humorous (all Czech films seem to be quietly humorous) story of an insignicant accounts clerk who murders for love of a beautiful woman. When the film offers us three alternative endings we understand why it has taken six years for someone to think it worthwhile bringing wer and sub-titling. Finally, The Ten Commandments returns to London in very successful 70 mm size, all three hours and forty-two minutes of it. It is unembarrassedly spectacular and highly entertaining the first time round, although the inspiration is closer to Alma-Tadema than Michelangelo.