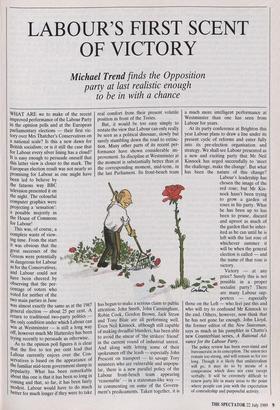 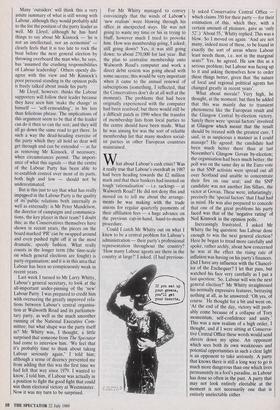 WHAT ARE we to make of the recent improved performance of the Labour Party in the opinion polls and at the European parliamentary elections — their first vic- tory over Mrs Thatcher's Conservatives on a national scale? Is this a new dawn for British socialism; or is it still the case that for Labour every silver lining has a cloud? It is easy enough to persuade oneself that this latter view is closer to the mark. The European election result was not nearly so promising for Labour as one might have been led to believe by the fatuous way BBC television presented it on the night. The colourful computer graphics were projecting a 'sensation': a possible majority in the House of Commons for Labour!

As to the opinion poll figures it is clear that the 'five to ten per cent lead that Labour currently enjoys over the Con- servatives is based on the appearance of the familiar mid-term government slump in Popularity. What has been remarkable about this one is that it has been so long in coming and that, so far, it has been fairly modest. Labour would have to do much better for much longer if they were to take

real comfort from their present volatile position in front of the Tories. But, it would he too easy simply to restate the view that Labour can only really he seen as a political dinosaur, slowly but surely stumbling down the road to extinc- tion. Many other parts of its recent per- formance have shown considerable im- provement. Its discipline at Westminster at the moment is substantially better than at the corresponding moment, mid-term, in the last Parliament. Its front-bench team

has begun to make a serious claim to public attention: John Smith, John Cunningham, Robin Cook, Gordon Brown, Jack Straw and Tony Blair are all performing well. Even Neil Kinnock, although still capable of making dreadful blunders, has been able to avoid the smear of 'the strikers' friend' in the current round of industrial unrest. And along with letting some of their spokesmen off the leash — especially John Prescott on transport — to savage Tory ministers who are vulnerable and unpopu- lar, there is a new parallel policy of the Labour front-bench team appearing 'reasonable' — in a statesman-like way in commenting on some of the Govern- ment's predicaments. Taken together, it is

a much more intelligent performance at Westminster than one has seen from Labour for years.

Victory — at any price? Surely this is not possible in a proper socialist party? There are many Labour sup- porters — especially those on the Left — who feel just this and who will try to confound Mr Kinnock to the end. Others, however, now think that he has not gone far enough. John Lloyd, the former editor of the New Statesman, says as much in his pamphlet in Chatto's new Counterblast series, A Rational Ad- vance for the Labour Party.

The policy review has been over-timid and bureaucratic in its conception. The union ties remain too strong, and will remain so for too long. Though it is likely that unilateralism will go, it may do so by means of a compromise which does not exist except verbally. It will be extremely difficult to renew party life in many areas to the point where people can join with the expectation of comradeship and purposeful activity.

Many 'outsiders' will think this a very astute summary of what is still wrong with Labour, although they would probably add to the list the position of the party leader as well. Mr Lloyd, although he has hard things to say about Mr Kinnock — 'he is not an intellectual, nor an economist' clearly feels that it is too late to rock the boat before the next general election by throwing overboard the man who, he says, has 'assumed the crushing responsibilities of Labour leadership'. Others openly dis- agree with this view and Mr Kinnock's poor personal standing in the opinion polls is freely talked about inside his party.

Mr Lloyd, however, thinks the Labour supporters will follow their leader because they have seen him 'make the change' in himself — 'self-remoulding', in his less than felicitous phrase. The implications of this argument seem to be that if the leader can do it then so can the rest; and they will all go down the same road to get there. In such a way the dead-heading exercise of the party which they all hold so dear will get through and can be extended — as far as removing Mr Kinnock, if necessary, when circumstances permit. The import- ance of what this signals — that the centre of the Labour Party has been able to re-establish control over most of its parts, both high and low — should not be underestimated.

But is this just to say that what has really imprftved in the Labour Party is the quality of its public relations both internally as well as externally: is Mr Peter Mandelson, the director of campaigns and communica- tions, the key player in their team? I doubt this; as the Conservatives themselves have shown in recent years, the pieces on the board marked 'PR' can be swapped around and even pushed right off it in the most dramatic, speedy fashion. What really counts in the longer term (the time-scale on which general elections are fought) is party organisation; and it is in this area that Labour has been so conspicuously weak in recent years.

Last week I turned to Mr Larry Whitty, Labour's general secretary, to look at the all-important under-pinning of the 'new' Labour Party. I was prepared to credit him with overseeing the greatly improved rela- tions between Labour's central organisa- tion at Walworth Road and its parliamen- tary party, as well as the much smoother running of the National Executive Com- mittee; but what shape was the party itself in? Mr Whitty was, I thought, a little surprised that someone from The Spectator had come to interview him. 'We feel that it's probably time to think about taking Labour seriously again,' I told him; although a sense of decency prevented me from adding that this was the first time we had felt that way since 1979. I wanted to know, I told him, if Labour was actually in a position to fight the good fight that could win them electoral victory at Westminster. Now it was my turn to be surprised.

For Mr Whitty managed to convey convincingly that the winds of Labour's 'new realism' were blowing through his office in unexpected ways. He was not going to waste my time or his in trying to bluff, however much I tried to provoke him. How was membership going, I asked; still going down? Yes, it was still going down; to about 270,000 for last year. But the plan to centralise membership onto Walworth Road's computer and work a direct debit system was going ahead with some success; this would be very important when it came to the annual renewal of subscriptions (something, I reflected, that the Conservatives don't do at all well at the moment). The problems that had been originally experienced with the computer had been resolved; but there would still be a difficult patch in 1990 when the transfer of membership lists from local parties to the centre should have been made. What he was aiming for was the sort of reliable membership list that many modern social- ist parties in other European countries maintained.

What about Labour's cash crisis? Was it really true that Labour's overdraft in 1987 had been heading towards the £2 million mark and that their bankers had insisted on tough 'rationalisation' — i.e. sackings — at Walworth Road? He did not deny this and moved on to tell me about the arrange- ments he was making with the trade unions for regular quarterly payments of their affiliation fees — a huge advance on the previous cap-in-hand, hand-to-mouth procedure.

Could I catch Mr Whitty out on what I knew to be a central problem for Labour's administration — their party's professional representation throughout the country? 'How many Labour agents are there in the country at large?' I asked. (I had previous-

ly asked Conservative Central Office which claims 350 for their party — for their estimation of this, which they, with a certain amount of pleasure, gave as 'only 52'.) 'About 55,' Whitty replied. This was a blow. So I moved on again: 'And are not many, indeed most of these, to be found in exactly the sort of areas where Labour least needs them, i.e. not in the marginal seats?' Yes, he agreed. He saw this as a serious problem; but Labour was facing up to it and asking themselves how to order these things better, given that 'the nature of local and regional political agents has changed greatly in recent years'.

What about morale? Very high, he thought, at the moment; but then he added that this was mainly due to transient phenomena like the European result and the Glasgow Central by-election victory. Surely there were 'special factors' involved at Glasgow which meant that the result should be treated with the greatest care, I said, in as suspicious a manner as I could manage? He agreed: the candidate had been much better there than at last November's Glasgow Govan by-election; the organisation had been much better; the poll was on the same day as the Euro vote so that SNP activists were spread out all over Scotland and unable to concentrate their fire on one seat; and the SNP candidate was not another Jim Sillars, the victor at Govan. These were, infuriatingly, precisely the 'special factors' that I had had in mind. .He was also prepared to concede that one of the great problems his party faced was that of the 'negative rating' of Neil Kinnock in the opinion polls.

Increasingly frustrated, I asked Mr Whitty the big question: has Labour done enough to win the next general election? Here he began to tread more carefully and spoke, rather archly, about how concerned he was at the effect the rising rate of inflation was having on his party's finances. Did I have any influence with the Chancel- lor of the Exchequer? I let that pass, but watched his face very carefully as I put a last question: 'So, Labour will win the next general election?' Mr Whitty straightened his normally expressive features, betraying nothing at all, as he answered: 'Oh yes, of course.' He thought for a bit and went on, 'At the end of the day, victory will prob- ably come because of a collapse of Tory momentum, self-confidence and unity.' This was a new realism of a high order, I thought, and if I were sitting at Conserva- tive Central Office these words would send shivers down my spine. An opponent which sees both its own weaknesses and potential opportunities in such a clear light is an opponent to take seriously. A party that knows there is still a long way to go is much more dangerous than one which lives permanently in a fool's paradise, as Labour has done so often in the past. A party that may not look entirely electable at the moment is not necessarily one that is entirely unelectable either.