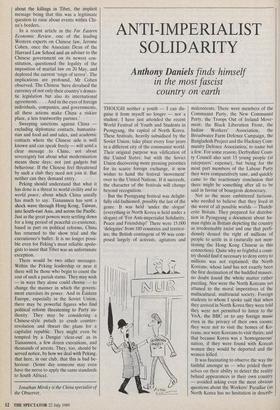 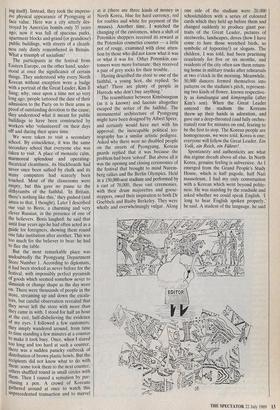 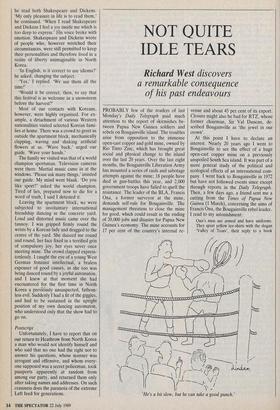 in the most fascist country on earth

THOUGH neither a youth — I can dis- guise it from myself no longer — nor a student, I have just attended the recent World Festival of Youth and Students in Pyongyang, the capital of North Korea. These festivals, heavily subsidised by the Soviet Union, take place every four years in a different city of the communist world. Their original purpose was vilification of the United States; but with the Soviet Union discovering more pressing priorities for its scarce foreign exchange, it now wishes to hand the festival 'movement' over to the United Nations. If it succeeds, the character of the festivals will change beyond recognition.

But the Pyongyang festival was delight- fully old-fashioned, possibly the last of the genre. It was held 'under the slogan' (everything in North Korea is held under a slogan) of 'For Anti-imperialist Solidarity, Peace and Friendship!' There were 15,000 `delegates' from 180 countries and territor- ies; the British contingent of 99 was com- posed largely of activists, agitators and

malcontents. There were members of the Communist Party, the New Communist Party, the Troops Out of Ireland Move- ment, the Black Liberation Front, the Indian Workers' Association, the Broadwater Farm Defence Campaign, the Bangladesh Project and the Hackney Com- munity Defence Association; to name but a few. For some reason, Derbyshire Coun- ty Council also sent 15 young people (at ratepayers' expense), but being for the most part members of the Labour Party they were comparatively sane, and quickly came to the reactionary conclusion that there might be something after all to be said in favour of bourgeois democracy.

Not so the more embittered factions, who needed to believe that they lived in the worst of all possible worlds — Thatch- erite Britain. They prepared for distribu- tion in Pyongyang a document about hu- man rights in Britain depicting the country as irredeemably racist and one that perfi- diously denied the right of millions of people to settle in it, (naturally not men- tioning the Hong Kong Chinese in this connection). Quite why so frightful a coun- try should find it necessary to deny entry to millions was not explained; the North Koreans, whose land has not exactly been the first destination of the huddled masses, no doubt found the whole matter rather puzzling. Nor were the North Koreans yet attuned to the moral imperatives of the multicultural, multiracial society. Foreign students to whom I spoke said that when they arrived in North Korea they were told they were not permitted to listen to the VoA, the BBC or to any foreign music even in the privacy of their own rooms; they were not to visit the homes of Ko- reans, nor were Koreans to visit theirs; and that because Korea was a 'homogeneous' nation, if they were found with Korean women they would be deported and the women killed.

ing itself). Instead, they took the impress- ive physical appearance of Pyongyang at face value. Here was a city utterly des- troyed by Ameridan bombs only 35 years ago; now it was full of spacious parks, apartment blocks and grand (or grandiose) Public buildings, with streets of a cleanli- ness only dimly remembered in Britain. What a triumph of socialism!

The participants in the festival from Eastern Europe, on the other hand, under- stood at once the significance of certain things. They understood why every North Korean without exception wore- a badge with a portrait of the Great Leader, Kim Il Sung; why, 'once upon a time not so very long ago; people tattooed the date of their admission to the Party on to their arms as proof of outstanding devotion to the cause; they understood what it meant for public buildings to have been constructed by workers who 'volunteered' on their days off and during their spare time.

We were taken to visit a secondary school. By coincidence, it was the same secondary school that everyone else was taken to visit. A place of monastic calm, tnarmoreal splendour and operating- theatrical cleanliness, its blackboards had never once been sullied by chalk and its many computers had scarcely been touched. Most of the classrooms were empty, but this gave no pause to the dithyrambs of the faithful. 'In Britain, there's nothing like this,' they gushed (and amen to that, I thought). Later I described our visit to Boris, a charming and very clever Russian, in the presence of one of the believers. Boris laughed: he said that until four years ago he had often acted as a guide for foreigners, showing them round one fake institution after another. This was too much for the believer to bear: he had to flee the table.

But the most remarkable place was undoubtedly the Pyongyang Department Store Number 1. According to diplomats, it had been stocked as never before fOr the festival, with impossibly perfect pyramids of goods which seemed somehow never to diminish or change shape as the day wore on. There were thousands of people in the store, streaming up and down the escala- tors, but careful observation revealed that they never left the store with more than they came in with. I stood for half an hour at the exit, half-disbelieving the evidence of my eyes. I followed a few customers: they simply wandered around, from time to time standing a few minutes at a counter to make it look busy. Once, when I stared too long and too hard at such a counter, there was a sudden panicky outbreak of distribution of brown plastic bowls. But the recipients did not know what to do with them: some took them to the next counter, others shuffled round in small circles with them. Then I caused a sensation by pur- chasing a pen. A crowd of Koreans gathered around at once to watch this unprecedented transaction and to marvel

at it (there are three kinds of money in North Korea, blue for hard currency, red for roubles and white for payment of the masses). Another time, I watched the changing of the customers, when a shift of Potemkin shoppers received its reward at the Potemkin cosmetics. counter — a little pot of rouge, examined with close atten- tion by those who did not know what it was or what it was for. Othpr Potemkin .cus.: tomers were more fortunate: theY received a pair of grey socks for their trouble. Having described the store to one of the faithful, a young Scot, she replied: tSo what? There are plenty of, people in Harrods who don't buy anything.'

The resemblance between Kimilsungism (as it is known) and fascisin altogether escaped the notice of the faithful. The monumental architecture of Pyongyang might have been designed'by Albert Speer, and certainly would have met with his approval; the inescapable political ico- nography has a similar artistic pedigree. Asked why there were no disabled people on the streets of Pyongyang, Korean guards replied that it was because the problem had been 'solved'. But above all it was the opening and closing ceremonies of the' festival that brought to mind Nurem- berg rallies and the Berlin Olympics. Held in a 150,000-seat stadium and performed by a cast of 70,000, these vast ceremonies, with their drum majorettes and goose- steppers, owed their inspiration to both Dr Goebbels and Busby Berkeley. They were wholly and overwhelmingly vulgar. Along

one side of the stadium were 20,000 schoolchildren with a series of coloured cards which they held up before them and changed suddenly to produce giant por- traits of the Great Leader, pictures of steelworks, landscapes, doves (how I have come to hate those wretched birds, so symbolic of hypocrisy!) or slogans. The children, I was told, had been practising ceaselessly for five or six months, and residents of the city often saw them return- ing home in military trucks after rehearsals at two o'clock in the morning. Meanwhile, 50,000 dancers formed themselves into patterns on the stadium's pitch, represent- ing two kinds of flower, known respective- ly as kimilsungia and kimjongilia (after Kim's son). When the Great Leader entered the . stadium the Koreans threw up their hands in adoration, and gave out a deep-throated (and fully orches- trated) roar for minutes on end, fearing to be the first to stop. The Korean people are homogeneous, we were told; Korea is one; everyone will follow the Great Leader. Ein Volk, ein Reich, ein Fiihrer!

Spontaneity and authenticity are what this regime dreads above all else. In North Korea, genuine feeling is subversive. As I emerged from the Grand People's Study House, which is half pagoda, half Nazi mausoleum, I had my only conversation with a Korean which went beyond polite- ness. He was standing by the roadside and asked whether we could speak English. 'I long to hear English spoken properly,' he said. A student of the language, he said he read both Shakespeare and Dickens. `My only pleasure in life is to read them,' he continued. 'When I read Shakespeare and Dickens I feel a joy inside me which is too deep to express.' His voice broke with emotion. Shakespeare and Dickens wrote of people who, however wretched their circumstances, were still permitted to keep their personalities and therefore lived in a realm of liberty unimaginable in North Korea.

'In English, is it correct to use idioms?' he asked, changing the subject.

`Would it be correct, then, to say that this festival is as welcome as a snowstorm before the harvest?'

Most of our contacts with Koreans, however, were highly organised. For ex- ample, a detachment of various Western nationalities visited selected Korean fami- lies at home. There was a crowd to greet us outside the apartment block, mechanically clapping, waving and shaking artificial flowers at us. 'Wave back,' urged our guide. 'Wave your hands.'

The family we visited was that of a world champion sportsman. Television cameras were there. Martial music came in at the windows. 'Please ask many things,' insisted our guide. My mind went blank. 'Do you like sport?' asked the world champion. Tired of lies, prepared now to die for a word of truth, I said I detested it.

Leaving the apartment block, we were subjected to involuntary international friendship dancing in the concrete yard. Loud and distorted music came over the tannoy. I was gripped firmly round the wrists by a Korean lady and dragged to the centre of the yard. She danced me round and round, her face fixed in a terrified grin of compulsory joy, her eyes never once meeting mine. The crowd clapped express- ionlessly. I caught the eye of a young West German feminist intellectual, a braless espouser of good causes, as she too was being danced round by a joyful automaton, and I knew at that moment she had encountered for the first time in NOrth Korea a previ&sly unsuspected, fathom- less evil. Suddenly I had a fit of the giggles, and had to be sustained in the upright position of my own dancing automaton, who understood only that the show had to go on.

Postscript Unfortunately, I have to report that on our return to Heathrow from North Korea a man who would not identify himself and who said that no one had the right not to answer his questions, whose manner was arrogant and offensive, and whom every- one supposed was a secret policeman, took passports apparently at random from among our party, and returned them only after taking names and addresses. On such crassness does the paranoia of the extreme Left feed for generations.