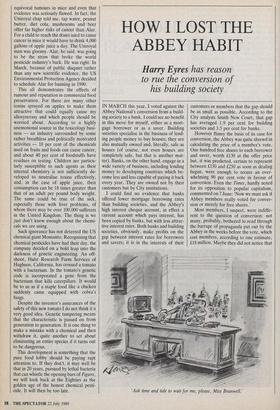 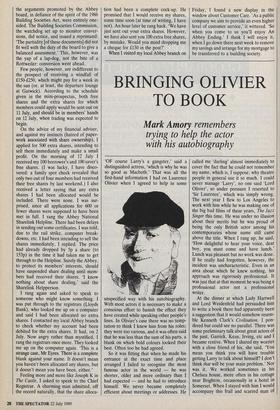 HOW I LOST THE ABBEY HABIT

to rue the conversion of his building society

IN MARCH this year, I voted against the Abbey National's conversion from a build- ing society to a bank. I could see no benefit in this move for myself, either as a mort- gage borrower or as a saver. Building societies specialise in the business of lend- ing people money to buy houses; they are also mutually owned and, literally, safe as houses (of course, not even houses are completely safe, but that is another mat- ter). Banks, on the other hand, engage in a wide variety of business, including lending money to developing countries which be- come less and less capable of paying it back every year. They are owned not by their customers but by City institutions.

I could find no evidence that banks offered lower mortgage borrowing rates than building societies, and the Abbey's high interest cheque account, in effect a current account which pays interest, has been copied by banks, but with less attrac- tive interest rates. Both banks and building societies, obviously, make profits on the gap between interest rates for borrowers and savers; it is in the interests of their customers or members that the gap should be as small as possible. According to the City analysts Smith New Court, that gap has averaged 1.9 per cent for building societies and 3.5 per cent for banks.

However flimsy the basis of its case for conversion, the Abbey was quite shrewd in calculating the price of a member's vote. One hundred free shares to each borrower and saver, worth £130 at the offer price but, it was predicted, certain to represent between £150 and £250 as soon as dealing began, were enough to secure an over- whelming 90 per cent vote in favour of conversion. Even the Times, hardly noted for its opposition to popular capitalism, commented on 7 June: 'Now we must ask if Abbey members really voted for conver- sion or merely for free shares.'

Most members, I suspect, were indiffe- rent to the question of conversion: not many, probably, bothered to read through the barrage of propaganda put out by the Abbey in the weeks before the vote, which cost members, according to one estimate, £18 million. Maybe they did not notice that 'Ask time and tide to wait for me, please, Miss Bran well.' the arguments promoted by the Abbey board, in defiance of the spirit of the 1986 Building Societies Act, were entirely one- sided. The Building Societies Commission, the watchdog set up to monitor conver- sions, did notice, and issued a reprimand: The partiality [of these documents] did not fit well with the duty of the board to give a balanced assessment.' This, however, was the yap of a lap-dog, not the bite of a Rottweiler: conversion went ahead.

Few people, however, are indifferent to the prospect of receiving a windfall of f150-£250, which might pay for a week in the sun (or, at least, the departure lounge at Gatwick). According to the schedule given in the mini-prospectus, both free shares and the extra shares for which members could apply would be sent out on 11 July, and should be in members' hands on 12 July, when trading was expected to begin.

On the advice of my financial adviser, and against my instincts (hatred of paper- work associated with share ownership), I applied for 500 extra shares, intending to sell them immediately and make a small profit. On the morning of 12 July I received my 100 borrower's and 100 saver's free shares. (I was lucky, I have disco- vered: a family spot check revealed that only two out of four members had received their free shares by last weekend.) I also received a letter saying that any extra shares I had been allocated would be included. There were none. I was sur- prised, since all applications for 600 or fewer shares were supposed to have been met in full. I rang the Abbey National Sharelink Helpline. There had been delays in sending out some certificates, I was told, due to the rail strike, computer break- downs, etc. I had been intending to sell the shares immediately, I replied. The price had already dropped by 5p a share (to 153p) in the time it had taken me to get through to the Helpline. Surely the Abbey, to protect its members' interests, should have suspended share dealing until mem- bers had received their shares. 'I know nothing about share dealing,' said the Sharelink Helpperson.

I rang again and asked to speak to someone who might know something. I was put through to the registrars (Lloyds Bank), who looked me up on a computer and said I had been allocated no extra shares. I contacted my local Abbey branch to check whether my account had been debited for the extra shares. It had, on 2 July. Now angry rather than mystified, I rang the registrars once more. They looked me up on the computer again. 'This is a strange case, Mr Eyres. There is a complete blank against your name. It doesn't mean you haven't been allocated any shares, but it doesn't mean you have been, either.'

Feeling more and more like Joseph K in The Castle, I asked to speak to the Chief Registrar. A charming man admitted, off the record naturally, that the share alloca- tion had been a complete cock-up. He promised that I would receive my shares, some time soon (at time of writing, I have not). An hour later he rang back. 'We have just sent out your extra shares. However, we have also sent you 100 extra free shares, by mistake. Would you mind dropping me a cheque for £130 in the post?'

When I visited my local Abbey branch on Friday, I found a new display in the window about Customer Care. 'As a public company we aim to provide an even higher level of customer service,' it wittered. `So when you come to us you'll enjoy An Abbey Ending.' I think I will enjoy it, when I go down there next week to remove my savings and arrange for my mortgage to be transferred to a building society.