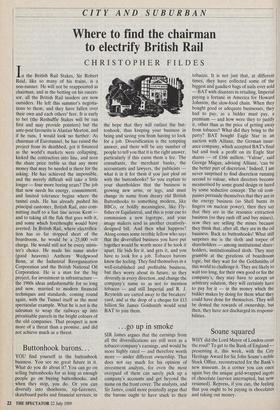 Where to find the chairman to electrify British Rail

In the British Rail Stakes, Sir Robert Reid, like so many of his trains, is a non-runner. He will not be reappointed as chairman, and in the betting on his succes- sor, all the British Rail insiders are now outsiders. He left this summer's negotia- tions to them, and they have fallen over their own and each others' feet. It is early to bet (the Reshuffle Stakes will be run first and may provide pointers) but the ante-post favourite is Alastair Morton, and if he runs, I would look no further. As chairman of Eurotunnel, he has raised the project from its deathbed, got it financed as the world's markets were collapsing, kicked the contractors into line, and seen the share price treble so that any more money that may be needed is there for the asking. He has achieved the impossible, and the merely difficult will take a little longer — four more boring years? The job that now needs his energy, commitment, and limited tolerance begins where the tunnel ends. He has already pushed his principal customer, British Rail, into com- mitting itself to a fast line across Kent and to taking all the flak that goes with it, and some which forethought would have averted. In British Rail, where electrifica- tion has so far stopped short of the boardroom, he would be a 25,000 volt charge. He would still not be every minis- ter's choice. He made his name under (good heavens) Anthony Wedgwood Benn, at the Industrial Reorganisation Corporation and the British National Oil Corporation. He is a man for the big project, for investment in infrastructure — the 1960s ideas unfashionable for so long and now, married to modern financial techniques and standards, coming round again, with the Tunnel itself as the most spectacular example. What he is not is the salesman to wrap the railways up into privatisable parcels in the bright colours of the old companies. That prospect is now more of a threat than a promise, and did not achieve much as a threat.