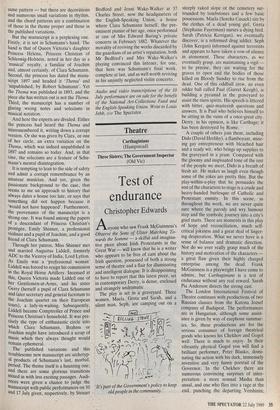 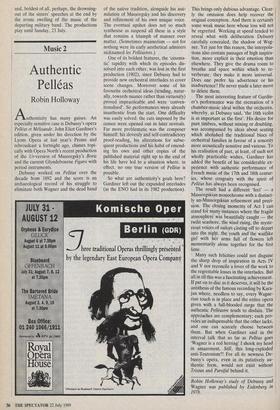 Anyone who saw Frank McGuinness's Observe the Sons of Ulster Marching To- wards the Somme — a skilful and imagina- tive piece about Irish Protestants in the Great War — will know that he is a writer who appears to be free of cant about the Irish question, possessed of both a strong sense of theatre and a flair for illuminating and intelligent dialogue. It is disappointing to have to report that this latest piece, set in contemporary Derry, is dense, enclosed and strangely undramatic. The play is set in a graveyard. Three women, Maela, Greta and Sarah, and a silent man, Seph, are camping out on a 'It's part of the Government's policy to keep old people in the community.' steeply raked slope of the cemetery sur- rounded by tombstones and a few basic possessions. Maela (Sorcha Cusack) sits by the clothes of a dead young girl, Greta (Stephanie Fayerman) nurses a dying bird. Sarah (Patricia Kerrigan), we eventually discover, is a reformed drug addict. Seph (John Keegan) informed against terrorists and appears to have taken a vow of silence in atonement. These characters, as we eventually grasp, are maintaining a vigil to be precise, they are waiting for the graves to open and the bodies of those killed on Bloody Sunday to rise from the dead. One of this oddball crew, an even odder ball called Paul (Garret Keogh), is building a pyramid in the graveyard to assist the risen spirits. His speech is littered with bitter, quiz-masterish questions and answers. It is Paul who believes himself to be sitting in the ruins of a once-great city. Derry, in his opinion, is like Carthage; it has been destroyed by Rome. A couple of others join them, including Dido (David Herlihy), a flamboyant, minc- ing gay entrepreneur with bleached hair and a ready wit, who brings up supplies to the graveyard in a pram. Compared with the gloomy and inspissated tone of the rest of the people we meet, Dido is a breath of fresh air. He makes us laugh even though some of the jokes are pretty thin. But the play-within-a-play that he persuades the rest of the characters to stage is a crude and heavy-handed burlesque of Catholic and Protestant enmity. In this scene, as throughout the work, we are never quite sure where the parody and wry humour stop and the symbolic journey into a city's grief starts. There are moments in this play of hope and reconciliation, much self- critical jokiness and a great deal of linger- ing desperation. What we never have is a sense of balance and dramatic direction. Nor do we ever really grasp much of the history and motivation of the characters a great flaw given their highly charged enterprise among the dead. Frank McGuinness is a playwright I have come to admire, but Carthaginians is a test of endurance without any real reward. Sarah Pia Anderson directs the strong cast. The London International Festival of Theatre continues with productions of two Russian classics from the Katona Jozsef company of Budapest. The performances are in Hungarian, although some assist- ance is given by way of earphone summar- ies. So, these productions are for the serious consumer of foreign theatrical goods who knows his Chekhov and Gogol well. There is much to enjoy. In their vibrantly physical Gogol you will find a brilliant performer, Peter Blasko, domi- nating the action with his dark, immensely inventive and very funny portrait of the Governor. In the Chekhov there are numerous convincing surprises of inter- pretation: a more sensual Masha than usual, and one who flies into a rage at the end, punching the departing Vershinin;

and, boldest of all, perhaps, the drowning- out of the sisters' speeches at the end by the ironic swelling of the music of the departing military band. The productions play until Sunday, 23 July.