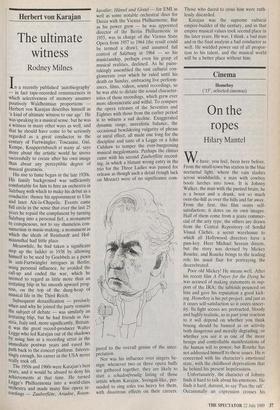 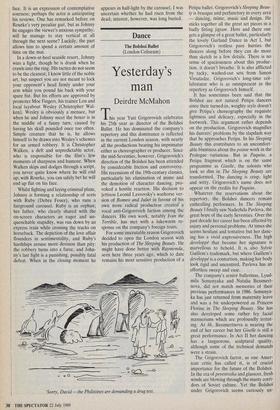 We have, you feel, been here before. From the small-town bus station in the blue nocturnal light, where the rain slashes across windshields, a man with cowboy boots lurches into town. It is Johnny Walker, the man with the puréed brain; he is a boxer and a drunk, not so much over-the-hill as over the hills and far away. From the first, this film oozes self- satisfaction; it dotes on its own images. Half of them come from a jeans commer- cial of the arty type; the others are drawn from the Central Repository of Sordid Visual Cliches, a secret warehouse to which all Hollywood directors have a pass-key. Here Michael Seresin directs, but the story was devised by Mickey Rourke, and Rourke brings to the leading' role his usual flair for portraying the decerebrated.

Poor old Mickey! He means well. After his recent film A Prayer for the Dying he was accused of making statements in sup- port of the IRA; the tabloids pounced on him and gave his reputation a good kick- ing. Homeboy is his pet project, and just as it oozes self-satisfaction so it oozes sincer- ity. Its fight scenes are protracted, bloody and highly realistic, so in part your reaction to it will depend on whether you think boxing should be banned as an activity both dangerous and morally degrading, or whether you see it as one of the more benign and controllable manifestations of the human will to power; but Rourke has not addressed himself to these issues. He is concerned with his character's emotional state, with the childhood deprivations that lie behind his present hopelessness.

Unfortunately, the character of Johnny finds it hard to talk about his emotions. He finds it hard, danamit, to say 'Pass the salt'. Occasionally an expression crosses his face. It is an expression of contemplative sourness; perhaps the actor is anticipating his reviews. One has remarked before on Rourke's very peculiar gait, but as Johnny he engages the viewer's anxious sympathy; will he manage to stay vertical at all through the next scene? Luckily, the part allows him to spend a certain amount of time on the mat.

In a down-at-heel seaside resort, Johnny wins a fight, though he is drunk when he crawls into the ring. His tactics do not seem to be the cleanest; I know little of the noble art, but suspect you are not meant to lock your opponent's head firmly under your arm while you pound his back with your spare fist. But his efforts are approved by promoter Moe Fingers, his trainer Lou and local layabout Wesley (Christopher Wal- ken). Wesley is obviously a menace, but when he and Johnny meet the boxer is in the middle of a funny turn, caused by having his skull pounded once too often. Simple creature that he is, he allows himself to be drawn into Wesley's schemes for an armed robbery. It is Christopher Walken, a deft and unpredictable actor, who is responsible for the film's few moments of sharpness and humour. When Walken skips and dodges through a script, you never quite know where he will end up; with Rourke, you can safely bet he will end up flat on his face.

Whilst fighting and laying criminal plans, Johnny is forming a relationship of sorts with Ruby (Debra Feuer), who runs a fairground carousel. Ruby is an orphan; her father, who clearly shared with the on-screen characters an eager and un- quenchable stupidity, was run down by an express train while crossing the tracks on horseback. The depiction of the love affair flounders in sentimentality, and Ruby's hardships arouse more derision than pity: the robbery turns into a farce, and John- ny's last fight is a punishing, possibly fatal defeat. When in the closing moment he appears in half-light by the carousel, I was uncertain whether he had risen from the dead; interest, however, was long buried.