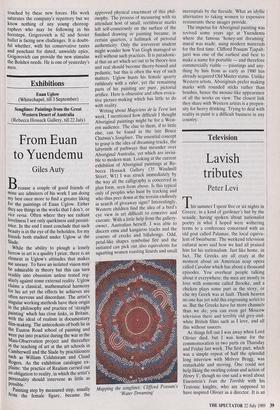 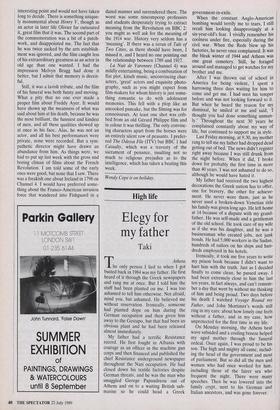 This summer I spent five or six nights in Greece, in a kind of gardener's but by the seaside, having spoken about nationalist poetry in what I hoped were withering terms to a conference concerned with an old goat called Palamas, the local equiva- lent of Swinburne. The weekend television cultural news said how we had all praised him for his nationalism. Just like home, in fact. The Greeks are all crazy at the moment about an American soap opera called Caroline which has about a thousand episodes. You overhear people talking about it everywhere: the men are mostly in love with someone called Brooke, and a chicken plays some part in the story, or else my Greek was at fault. Thank heaven no one has yet sold this engrossing series to us. But the Greeks have far more channels than we do; you can even get Moscow television there and terribly old grey-and- white British films such as I love, and all this without saucers.

As things fell out I was away when Lord Olivier died, but I was home for the commemoration in two parts on Thursday and Friday last week. The first part, which was a simple repeat of half the splendid long interview with Melvyn Bragg, was remarkable and moving. One could not help liking the swirling colour and action of Henry V, though no one said a word about Eisenstein's Ivan the Terrible with his Teutonic knights, who are supposed to have inspired Olivier as a director. It is an interesting point and would not have taken long to decide. There is something unique- ly monumental about Henry V, though as an actor in later life Olivier far outsoared it, great film that it was. The second part of the commemoration was a bit of a patch- work, and disappointed me. The fact that he was twice sacked by the arts establish- ment was ignored, and the film caught less of his extraordinary greatness as an actor in old age than one wanted. I had the impression Melvyn Bragg had done it better, but I admit that memory is deceit- ful.

Still, it was a lavish tribute, and the film of his funeral was both funny and moving. What a pity that no one ever made a proper film about Freddy Ayer. It would have shown up the meanness of what was said about him at his death, because he was the most brilliant, the funniest and kindest of men, and all these qualities showed up at once in his face. Alas, he was not an actor, and all his best performances were private, none were recorded. But a sym- pathetic director might have drawn an abundance from him. As things were, we had to put up last week with the gross and boring climax of films about the French Revolution. I am told some of the early ones were good, but none that I saw. There was a freakish one about Ireland in 1798 on Channel 4. I would have preferred some- thing about the Franco-American invasion force that wandered into Fishguard in a

dazed manner and surrendered there. The worst was some nincompoop professors and students desperately trying to extract meaning from the Revolution on BBC 2: you might as well ask for the meaning of the 1914 war. History very seldom has a `meaning'. If there was a rerun of Tale of Two Cities, as there should have been, I missed it, and I heard no one pointing out the relationship between 1789 and 1917.

La Nuit de Varennes (Channel 4) was mildly entertaining, being a combination of flat plot, kitsch music, unconvincing char- acters, `great' actors and exquisite photo- graphy, such as you might expect from film-makers for whom history is just some- thing romantic to do with adolescent memories. This fell with a plop like an uncooked pancake, but the filming was for connoisseurs. At least one shot was crib- bed from an old Gerard Philippe film and in colour it was thrilling. The only convinc- ing characters apart from the horses were an entirely silent row of peasants. I prefer- red The Odessa File (ITV) but BBC 1 had Casualty, which was a travesty of the sacrament of penance, insulting not so much to religious prejudice as to the intelligence, which has taken a beating this week.

Wendy Cope is on holiday.