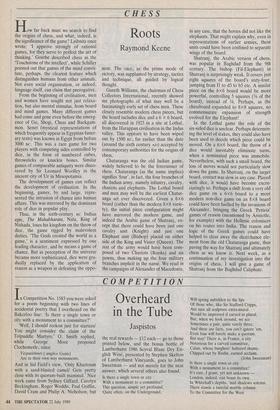 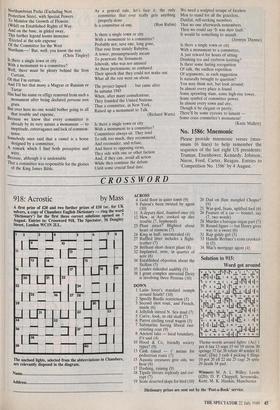 Overheard in the Tube

In Competition No. 1583 you were asked for a poem beginning with two lines of accidental poetry that I overheard on the Bakerloo line: 'Is there a single town or city with a monument to a committee?' `Well, I should reckon just for starters/ You might consider the claim of the Tolpuddle Martyrs,' 0. Smith replied, while George Moor proposed Clochemerle, since Vespasiennes ( anglice Gents)

Are in their own way monuments.

And in Sid Field's view, 'Only Khartoum with a sand-blasted camel/ Gets pretty close with its quorum-built mammal.' Nice work came from Sydney Giffard, Carolyn Beckingham, Roger Woddis, Paul Griffin, David Cram and Philip A. Nicholson, but the real rewards — £12 each — go to those printed below, and the bonus bottle of Dry Lamberhurst 1986 Seyval Blanc En- glish Wine, presented by Stephen Skelton of Lamberhurst Vineyards, goes to John Sweetman — and not merely for the neat answer, which several others also found.

Is there a single town or city With a monument to a committee? This question, simple yet profound, Quite often, on the Underground, Will spring unbidden to the lips Of those who, like Sir Stafford Cripps, Are sure all sculpture extra-mural Would be improved if carved in plural.

But, when we look around, we see Sometimes a pair, quite rarely three; And these are facts, you can't ignore 'em, Even four will barely make a quorum.

But stay! There is, in France, a city Notorious for a carved committee, Calais, whose burghers' haltered shame, Chipped out by Rodin, earned acclaim.

(John Sweetman) Is there a single town or city With a monument to a committee?

It's rare, I grant, yet not unknown -

London, indeed, can boast its own.

In Whitehall's depths, 'mid shadows solemn, There stands a tasteful marble column To the Committee for the West Northumbrian Parks (Excluding Nest Protection Sites), with Special Powers To Monitor the Growth of Flowers (Wild) on Established Rights of Way. And on the base, in gilded sway, This further legend looms immense: 'Erected at the sole expense Of the Committee for the West Northum—' But, well, you know the rest.

(Chris Tingley) Is there a single town or city With a monument to a committee?

Well, there must be plenty behind the Iron Curtain, Of that I'm certain, And I'll bet that many a Magyar or Russian or Tartar Has had his name or effigy removed from such a monument after being declared persona non grata.

But over here no one would bother going to all that trouble and expense, Because we know that every committee is already by its very nature a monument — to ineptitude, extravagance and lack of common- sense.

Somebody once said that a camel is a horse designed by a committee, A remark which I find both perceptive and witty, Because, although it is undeniable That a committee was responsible for the glories of the King James Bible, As a general rule, let's face it, the only committee that ever really gets anything properly done Is a committee of one. (Ron Rubin) Is there a single town or city With a monument to a committee?

Probably not, save one, long gone, That rose from stately Babylon, A tower, presumptuously meant To penetrate the firmament. Jehovah, who was not amused At these pretensions, so confused Their speech that they could not make out What all the rest were on about.

The project lapsed . . . but came alive In autumn 1945 When, after many consultations, They founded the United Nations, Thus a committee, in New York, Raised up a monument to Talk. (Richard Watts) Is there a single rown or city With a monument to a committee? Committees always sit. They tend To talk too much, they recommend, And reconsider, and refuse, And listen to opposing views. They side with one or other faction And, if they can, avoid all action While they continue the debate Until some crucial final date. We need a sculpted troupe of faceless Men to stand for all the graceless, Dutiful, self-seeking members That no one afterwards remembers.

Then we could say 'It was their fault.'

It would be something to assault.

(Jermyn Thynne Is there a single town or city With a monument to a committee, A just reward for hours of sitting Drinking tea and eyebrow-knitting?

Is there some lasting recognition Of talk, the endless repetition Of arguments, as each suggestion Is naturally brought to question?

You may think not, but look around: In almost every place is found Some sprawling slum, some high-rise tower, Some symbol of committee power.

In almost every town and city, Though it be elegant or pretty, There'll be some eyesore to lament - Some crass committee's monument!