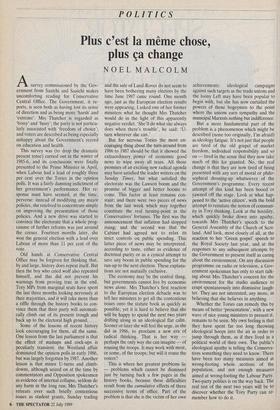 Asurvey commissioned by the Gov- ernment from Saatchi and Saatchi makes uncomforting reading for Conservative Central Office. The Government, it re- ports, is seen both as having lost its sense of direction and as being more `harsh' and `extreme'. Mrs Thatcher is regarded as 'bossy' and `fussy'; the party is not particu- larly associated with 'freedom of choice'; and voters are described as being especially unhappy about the Government's record on education and health.

This survey was (to drop the dramatic present tense) carried out in the winter of 1985-6, and its conclusions were finally presented to 'the Prime Minister in April, when Labour had a lead of roughly three per cent over the Tories in the opinion polls. It was a fairly damning indictment of her government's performance. Her re- sponse must have seemed, at the time, perverse: instead of modifying any major policies, she resolved to concentrate simply on improving the presentation of those policies. And a new drive was started to convince the electorate that a whole prog- ramme of further reforms was just around the corner. Fourteen months later, she won the general election with a lead over Labour of more than 11 per cent of the vote.

Old hands at Conservative Central Office may be forgiven for thinking that, by and large, history does repeat itself. But then the boy who cried wolf also repeated himself, and this did not prevent his warnings from proving true in the end. Tory MPs from marginal seats have spent the last three months looking nervously at their majorities, and it will take more than a riffle through the history books to con- vince them that their party will automati- cally climb out of its present trough and back up to the electoral high ground.

Some of the lessons of recent history look encouraging for them, all the same. One lesson from the last parliament is that the effect of mishaps and cock-ups is peculiarly transient: the Westland affair dominated the opinion polls in early 1986, but was largely forgotten by 1987. Another lesson is that minor U-turns and climb- downs, although seized on at the time by commentators and Opposition spokesmen as evidence of internal collapse, seldom do any harm in the long run; Mrs Thatcher's retreats over such briefly contentious issues as student grants, Sunday trading and the sale of Land-Rover do not seem to have been bothering many electors by the time June 1987 came round. One month ago, just as the European election results were appearing, I asked one of her former ministers what he thought Mrs Thatcher would do in the light of this apparently negative verdict. 'She'll do what she always does when there's trouble', he said: `U- turn wherever she can.'

But for nervous Tories the most en- couraging thing about the turn-around from 1986 to 1987 should be that it showed the extraordinary power of economic good news to wipe away all tears. All those promises of an exciting new radical agenda may have satisfied the leader writers on the Sunday Times, but what satisfied the electorate was the Lawson boom and the promise of bigger and better booms to come. This factor at least remains con- stant; and there were two pieces of news from the last week which may together constitute the real turning-point in the Conservatives' fortunes. The first was the announcement that inflation had stopped rising; and the second was that the Cabinet had agreed not to relax its strict controls on public spending. This latter piece of news may be interpreted, according to taste, either as evidence of doctrinal purity or as a cynical attempt to save any boom in public spending for the run-up to the next election. These explana- tions are not mutually exclusive.

The economy may be the central thing, but governments cannot live by economic news alone. Mrs Thatcher's first reaction to the European election debacle was to tell her ministers to get all the contentious issues onto the statute book as quickly as possible; yet it is hard to believe that she will be happy to spend the next two years drifting along in an ideological flat calm. Sooner or later she will feel the urge, as she did in 1986, to proclaim a new era of radical thinking. That is her way perhaps the only way she can imagine — of rousing the troops. It may work with most, or some, of the troops; but will it rouse the voters?

This is where her greatest problems lie — problems which cannot be dismissed just by turning back a few pages in the history books, because these difficulties result from the cumulative effects of three successive terms of office. Part of the problem is that she is the victim of her own

achievements: ideological campaigns against such targets as the trade unions and the loony Left may have been popular to begin with, but she has now curtailed the powers of those bogeymen to the point where the unions earn sympathy and the municipal Marxists nothing but indifference.

But a more fundamental part of the problem is a phenomenon which might be described (none too originally, I'm afraid) as ideology fatigue. It's not just that people are tired of the old gospel of market freedom, individual responsibility and so on — tired in the sense that they now take much of this for granted. No, the real change is that they are now tired of being presented with any sort of moral or philo- sophical dressing-up whatsoever of the Government's programme. Every recent attempt of this kind has been booed or yawned off the stage. Look at what hap- pened to the 'active citizen', with the bold attempt to reinstate the notion of commun- ity in Tory thinking. Look at the hostility, which quickly broke down into apathy, towards Mrs Thatcher's speech to the General Assembly of the Church of Scot- land. And look, most closely of all, at the reaction to her `Green gospel' speech to the Royal Society last year, and at the responses to any subsequent attempts by the Government to present itself as caring about the environment. On any discussion programme on radio or television, a Gov- ernment spokesman has only to start talk- ing about Mrs Thatcher's concern for the environment for the studio audience to I erupt spontaneously into dismissive laugh- I ter. They are not interested, any more, in believing that she believes in anything.

Whether the Tories can remedy this by means of better 'presentation', with a new wave of nice young ministers to present it, remains to be seen. My own feeling is that they have spent far too long throwing ideological hoops into the air in order to jump through them, as if they lived in a political world of their own. The public's ideological apathy is telling the Conserva- tives something they need to know. There have been too many measures aimed at wrong-footing whole .sections of the population, and not enough measures aimed at wrong-footing the Labour Party. Two-party politics is on the way back. The real test of the next two years will be to discover whether the Tory Party can re- member how to do it.