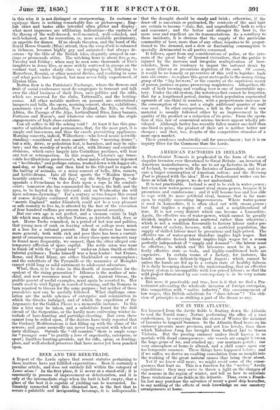 A Protectionist Nemesis is prophesied in the form of the most singular invasion ever threatened. to Great Britain—an invasion of American manufacturers, who are to set up factories in the West of Ireland, to compete with the factories of Laneashire, and to se- cure a larger consumption of American cotton : and the Morning Post is pleased with the idea! How a Protectionist writer can be- lieve or relish the project, we do not understand. It is not practicable. Ireland is said to be rich in water-power; but even now water-power cannot rival steam-power, because it is precarious and cumbersome ; and it will become less and less able to cope with its more artificial rival, because that is far more open to rapidly succeeding improvements. Where water-power is used in Lancashire, it is often eked out with steam-power ; but that implies aregion of coal, and a neighbourhood of iron. It is not every district which can become a Lancashire. Again, the effective use of water-power, which cannot be greatly divided, implies a population scattered rather than otherwise ; which is not a condition favourable to factory labour under pre- sent forms of society, because, with a scattered population, the supply of skilled labour must be precarious and high-priced. The effective use of water-power therefore implies high wages. But indeed, effective factory labour implies high wages for a reason perfectly independent of " supply and demand "—the labour must be effective ; to which end the labourers must be in a per- fectly effective state as tools, and highly-conditioned tools are expensive. In certain rooms of a factory, for instance, the hands must have delicately-tipped fingers ; which cannot be unless the hands are fed up to a certain state of healthy fulness. It is daily becoming clearer to the understanding, that an effective factory system is inco atible with low-priced labour; so that the wild project threatened 'y our contemporary is in its very nature a dream.

But were it practicable and true, how is it that we find a Pro- tectionist advocating the wholesale invasion of foreign enterprise, this competition with " native industry," this encouragement of low wages, this British substitute for " slave-labour" ? The obli- vion of principles is as striking a part of the dream as any.