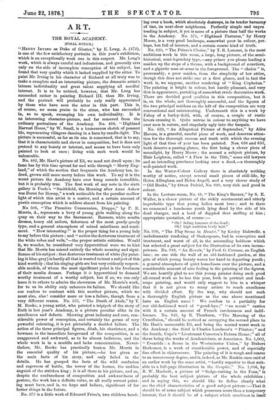 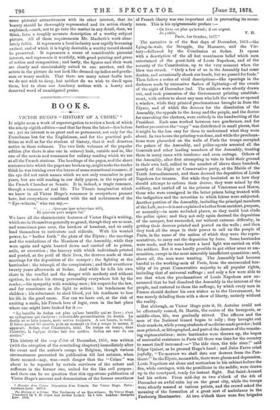 "HENRY IRVING as Duke of Gloster," by E. Long, A. (472), is one of the few satisfactory portraits in this year's exhibition, which is an exceptionally weak one in this respect. Mr. Long's work, which is always careful and industrious, and generally errs only on the side of incomplete conception of his subject, has found that very quality which it lacked supplied by the sitter. To paint Mr. Irving in his character of Richard at all truly was to make a complete and an interesting picture, the dramatic artist's intense individuality and great talent supplying all needful interest. It is to be noticed, however, that Mr. Long has succeeded rather in painting Richard 'IL than Mr. Irving, and the portrait will probably be only really appreciated by those who have seen the actor in this part. This is, of course, no mean praise to the sitter, who has succeeded in, so to speak, swamping his own individuality. It is an interesting character-picture, and far removed from the ordinary portraiture of the Academy. No. 468, " Highland Harvest Home," by W. Small, is a humourous sketch of peasant We, representing villagers dancing in a barn by candle-light. The picture is successful, as far as its aim is concerned, that is to say, that it is characteristic and clever in composition, but it does not pretend to any beauty or interest, and seems to have been only painted to look at once ; living with such work would be unbearable.

No. 482, Mr. Hart's picture of Eli, we need not dwell upon ; its fame has by this time spread far and wide through Merry Eng- land," of which the section that frequents the Academy has, in- deed, grown still more merry before this work. To say it is the worst picture the Academy have ever hung sounds incredible, but it is probably true. The first work of any note in the sixth gallery is Poole's "Smithfield, the Morning after Anne Askew was Burnt for Heresy," a work noticeable for the peculiar mellow light of which this artist is a master, and a certain amount of poetic conception which is seldom absent from his painting.

No 506, "The Premiere Communion, Dieppe," by P. R. Morris, A., represents a bevy of young girls walking along the quay on their way to the Sacrament. Banners, white muslin dresses, hoary old sailors, fishermen of the most goody-goody type, and a general atmosphere of mixed saintliness and senti- ment. " How interesting !" is the proper thing for a young lady to say before this picture ; and " notice the dexterous treatment of the white robes and veils,"—the proper artistic criticism. Would it, we wonder, be considered very hypercritical were we to hint that Mr. Morris has missed entirely the whole meaning and signi- ficance of his subject ; that dexterous treatment of white (by paint- ing it blue-grey) is hardly all that is wanted to treat a subject of this kind worthily ; that his singing-girls are but very evidently respect- able models, of whom the most significant point is the freshness of their muslin dresses. Perhaps it is hypercritical to demand worthy treatment of a worthy subject, but if so, we can only leave it to others to admire the cleverness of Mr. Morris's work, for to us its ability only enhances its failure. We should like our readers to contrast with this another picture, which we must also, alas ! consider more or less a failure, though from a very different reason. No. 533, " The Death of Ahab," by T. M. Rooke, a young artist, who painted a triptych of the story of Ruth in last year's Academy, is a picture peculiar alike in its excellences and defects. Showing great industry and care, con- siderable power of conception, and certainly the germs of very powerful colouring, it is yet pictorially a decided failure. The action of the three principal figures, Ahab, his charioteer, and a bowman in the immediate foreground of the composition, is so exaggerated and awkward, as to be almost ludicrous, and the whole work is in a muddle and lacks concentration. Never- theless, Mr. Rooke has practically beaten Mr. Morris in the essential quality of his picture,—he has given us the main facts of his story, and only failed in the details. He has grasped the facts of the wild confusion

and eagerness of battle, the terror of the horses, the sudden anguish of the stricken king ; it is all there in his picture, and so, despite the confusedness of composition and awkwardness of gesture, the work has a definite value, as all really earnest paint- ing must have, and is, we hope and believe, significant of far better things in the future.

No. 573 is a little work of Edouard Frerels, two children bend- ing over a book, which absolutely destroys, in its tender harmony of tint, its next-door neighbours. Perfectly simple and unpre tending in subject, it yet is more of a picture than half the works in the Academy. No. 571, " Highland Pastures," by Henry Moore, is a very good landscape, somewhat poor in colour, per- haps, but full of interest, and a certain coarse kind of truth.

No. 610, " The Prince's Choice," by T. R. Lamont, is the most ambitious work in this room, a large, long picture, of the semi- historical, semi-legendary type,—any prince you please leading a maiden up the steps of a throne, with a background of courtiers, and a gigantic man-at-arms in the foreground. The " choice " presumably, a poor maiden, from the simplicity of her attire, though this does not strike one at a first glance, and in fact the work is, we suppose, another rendering of "King Cophetua." The painting is bright in colour, but hardly pleasant, and very thin in appearance, partaking of somewhat crude decorative work. There are decided good qualities in this composition, but it is, on the whole, not thoroughly successful, and the figures of the two principal maidens on the left of the composition are very conventional and uninteresting. Underneath this is a work by Fahey of a barley-field, with, of course, a couple of rustic lovers crossing it. Quite untrue in colour to anything we have ever seen in nature, and singularly ugly into the bargain.

No. 633, " An Allegorical Picture of September," by Alice Havers, is a graceful, careful piece of work, and deserves atten- tion for the thorough success and truth with which the evening light of that time of year has been painted. Nos. 638 and 650, both deserve a passing glance, the first being a clever piece of moonlight, by Henry Moore ; the second a subject picture, by Blair Leighton, called "A Flaw in the Title," some old lawyers and an intending purchaser looking over a deed,—a thoroughly well-painted work.

In the Water-Colour Gallery there is absolutely nothing worthy of notice, except several small pieces of still-life, by Helen Allingham and Helen Angell, and a very clever study of "Old Books," by Owen Dalziel, No. 840, very rich and good in colour.

In the Lecture-room, No. 49, " The King's Banner," by S. E. Waller, is a clever picture of the sickly sentimental and utterly improbable type that young ladies most love ; and to them we commend a handsome youth lying dead by the side of his dead charger, and a herd of dappled deer sniffing at him ; appropriate quotation, of course :-

No. 930, "The Play Scene in Hamlet," by Keeley Halswelle, a melodramatic rendering of Shakespeare, bad in conception and treatment, and worst of all, in the astounding boldness which has selected a great subject for the illustration of its own incom- petence. No. 948, "Au Revoir," by Fred. G. Cotman, an English lane ; on one side the wall of an old-fashioned garden, at the gate of which young beauty waves her hand to departing youth ; a general atmosphere of quiet homeliness over the picture, and a considerable amount of nice feeling in the painting of the figures. We are heartily glad to see this young painter doing such good all-round work as he has this year, both in portrait and land- scape painting, and would only suggest to him in a whisper that it is not given to many artists to reach excellence with divided effort. By the way, why should not such a thoroughly English picture as the one above mentioned have an English name ? We confess to a partiality for our old-fashioned word of " good-bye ;" " au revoir " carries with it a certain amount of French carelessness and indif- ference. No. 949, by R. Thorburn, "The Morning of the Crucifixion," should be noticed as occupying the second place to Mr. Hart's memorable Eli, and being the second worst work in the Academy ; the third is Charles Landseer's " Pirates ; " and the fourth, Cope's "Lieutenant Cameron's Return Home ; " all of these being the works of Academicians, or Associates. No. 1,002, " Eventide : a Scene in the Westminster Union," by Hubert Herkomer, is a work of considerable power, and of especially fine effect in chiaroscuro. The painting of it is rough and coarse to an unnecessary degree, and is, indeed, as Mr. Ruskin once said of an earlier work by the same artist, " hardly superior to that suit- able to a full-page illustration in the Graphic." No. 1,016, by R. W. Macbeth, a picture of " Sedge-cutting in the Fens," is probably the best subject picture of the whole exhibition ; and in saying this, we should like to define clearly what are the chief characteristics of a good subject picture :—That it should be of some subject which possesses more than a temporary interest, that it should be of a subject which combines in itself

some pictorial attractiveness with its other interest, that its beauty should be thoroughly represented and its action clearly explained,—such, not to go into the matter in any detail, does, we think, form a roughly accurate description of a worthy subject picture. All of these requirements Mr. Macbeth's work abso- lutely fulfils. It represents a local industry now rapidly becoming extinct, and of which it is highly desirable a worthy record should be preserved. It represents a scene of considerable pictorial interest, and represents it worthily, with good painting and grace of action and composition ; and lastly, the figures and their work are clearly and unmistakably suited to one another, and the actors in the picture do not look like dressed-up ladies and gentle- men or weary models. That there are many minor faults here we do not wish to deny, but neither do we wish to dwell upon them, but to close our Academy notices with a hearty and deserved word of unmitigated praise.