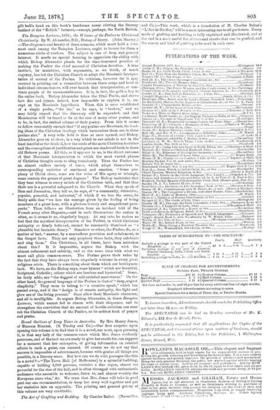 The Bampton Lectures, 1876 ; the Witness of the Psalms

to Christ and Christianity. By W. Alexander, D.D., Bishop of Derry. (John Murray.) —The eloquence and beauty of these sermons, which must hold a fore- most rank among the Bampton Lectures, ought to insure for them a numerous circle of readers. The subject is one of deep and general interest. It needs no special learning to appreciate the ability with which Bishop Alexander pleads for the time-honoured practice of making the Psalter the chief manual of Christian devotion. A true instinct, he maintains, with arguments, as we think, of much cogency, has led the Christian Church to adopt the Messianic interpre- tation of several of the Psalms. No criticism, however far it may succeed in pointing out a connection between these songs and local or individual circumstances, will ever banish that interpretation, or con- vince people of its unreasonableness. It is, in fact, the golden key to the entire book. Bishop Alexander takes the 22nd Psalm, and shows how flat and jejune, indeed, how impossible to explain it is, ex- cept on the Messianic hypothesis. When this is once established of a single psalm, "the ice," as ho says, is "broken," and we may fairly expect that the discovery will be expanded, and that Messianism will be found to lie at the root of many other psalms, and to be, in fact, the central scheme of their poetry. From this it seems to follow reasonably enough that " if any psalms are Messianic, the lead- ing ideas of the Christian theology which harmonises them are in those psalms also." A very wide field is thus at once opened, and Bishop Alexander goes on to show, in a way which to our minds is not in the least fanciful or far-fetched, how the seeds of the main Christian doctrines and the conceptions of justification and grace are shadowed forth in these old Hebrew poems. All this, so it appears to us, is the direct outcome of that Messianic interpretation to which the moat varied phases of Christian thought seem to cling tenaciously. Thus the Psalter has an almost endless variety of tones, which adapt themselves to corrresponding varieties of sentiment and emotion. "Some pro- phesy of Christ risen, some are the voice of His agony or triumph, some contain the germs of great dogmas." The Bishop maintains that they bear witness to every article of the Christian faith, and that thus their use is a powerful safeguard to the Church. When they speak of Sion and Jerusalem, they tell us, he says, of " a community, attractive, popular, peaceful, and universal," of which if we lose the sense, he finely adds that "we lose the courage given by the feeling of being members of a great host, with a glorious history and magnificent pros- pects." Then follows an illustration from an incident told of the French array after Magenta,—and in such illustrations the author is Truth and Error in Religious Belief. cr 8vo (Hamilton) 5/0 the fact that they have always been singularly welcome in every great religions crisis. There is something about them which our best hymns

lack. We have, as the Bishop says, some hymns " which are beautiful, SCALE OF CHARGES FOR ADVERTISEMENTS.

Scriptural, Catholic ; others which are luscious and hysterical." Some, OUTSIDE PAGE, TWELVE GUINEAS. he truly adds, are "tile doggrel of self-satisfied narrowness." On the iPapage £10 10 0 I Narrow Column other hand, the general language of the Psalms is that of "deep, august Quarter-Page 2 12 6 Quarter-Column 0 17 6 simplicity." They seem to belong to " a creative epoch," which has Six lines and under, 5a, and 9d per line for every additional line (of eight words),

passed away, and if the " design is of remote antiquity, the light and Displayed Advertisements according to space. glow are of the living present." Once allow their Messianic character, Special Contracts for a Series of Three, Six, or Twelve Months.

often, as it seems to us, singularly happy. At any rate, he makes es ns r''VV:esad; 'te-tratialrydnf English Languages Rlicireerstj 1%461

feel that the mystical interpretation of the Psalter, in which Christian rutleY(1 Life, 8vo 8vo (Wesleyan Conference Office) 5,0

antiquity so firmly believed, cannot be summarily dismissed as " a Webb Vil:rp!SiozIng,aorLtecrtical Treatise, Svo (1 Heywood) 7/6 plausible but fantastic theory." Somehow or other, the Psalms do, as a Yonge (C. M.), Womankind, 3rd edition, cr 8vo (Mozley) 7/6

matter of fact, " answer, by a marvellous prevision and ordainment, to I the Gospel facts. They not only prophesy those facts, they celebrate and sing them." Can Christians, in all times, have been mistaken about this ? It is impossible, argues the Bishop with the utmost refinement and subtlety, and at the same time with what we must call plain common-sense. The Psalms prove their value by

and all is intelligible. So argues Bishop Alexander, in these Bampton Lectures, which cannot fail to charm with their eloquence, and to strengthen the conviction that no amount of hostile criticism can ever rob the Christian Church of the Psalter, as its noblest book of prayer and praise.