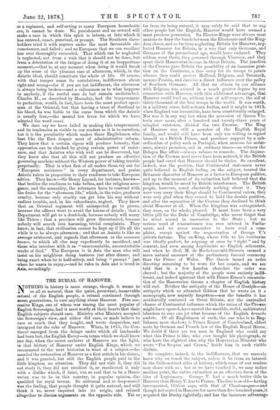 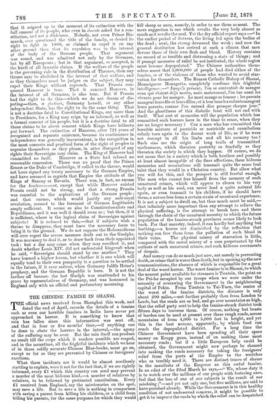 THE BURIAL OF HANOVER.

NOTHING in history is more strange, though it seems to us all so natural, than the quiet, persistent, immovable 'refusal of the English people, a refusal continued through oven generations, to care anything about Hanover. Five suc- .oessive Kings, one of whom was among the most popular of English Sovereigns, had it most nearly at their hearts that their English subjects should care. Ministry after Ministry accepted the Sovereign's view, and either did care, or made believe to care so much that they fought, and wrote despatches, and intrigued for the sake of Hanover. When, in 1815, the Con- tinent emerged from the deluge under which all landmarks had been lost, the English Envoy—in terms which we shall know one day, when the secret archives of Hanover see the light, in that history of Hanover under English Kings, which we recommend to the next historian in want of a subject—de- manded the restoration of Hanover as a first article in his claims, and it was granted, but still the English people paid to the little kingdom no attention. They did not visit it, they did not study it, they did not recollect it, or recollected it only with a dislike which, if faint, was so real that to be a Hano- verian was to be in this country, in popular opinion, dis- qualified for royal favour. So universal and so deep-seated was the feeling, that people thought it quite natural, and still think it so, never inquired into its origin, and refused altogether to discuss arguments on the opposite side. Yet so far from its being natural, it may safely be said that to any other people but the English, Hanover would have seemed a most precious possession. Its Elector-Kings were always most anxious to draw the bonds between the Electorate and the King- dom closer, and so far from neglecting Britain for Hanover, neg- lected Hanover for Britain, in a way that only Germans, and Germans of the pre-national age, would have endured. They seldom went there, they governed through Viceroys, and they spent their Hanoverian income.in Great Britain. The junction of the Crowns gave Britain the possibility of an immense posi- tion on the Continent, a free entry for its troops to points whence they could protect Holland, Belgium, and Denmark, menace Prussia, and exercise a direct influence over the policy of Southern Germany. All that we obtain by our alliance with Belgium was secured in a much greater degree by our connection with Hanover, with this additional advantage, that Hanover could lend us, without loss of self-respect, the aid of thirty thousand of the best troops in the world. It was worth, in a military sense, half-a-dozen Indias, and it might in 1815, when England was irresistible, have been considerably enlarged. Nor was it in any way lost when the accession of Queen Vic- toria once more, after a hundred and twenty-three years of mingled existence, divided the two Crowns. The King of Hanover was still a member of the English Royal family, and would still have been only too willing to regard himself as a British Prince, and purchase support by a sub- ordination of policy such as Portugal, when anxious for assist- ance, always promises, and in ordinary times—as witness the Delagoa Bay affair—always refuses to concede. The disjunc- tion of the Crowns need never have been noticed, if the British people had cared that Hanover should be theirs. So excellent, indeed, was the position, that Continental statesmen never quite believed in English feeling on the subject, treated the Britannic character of Hanover as a factor in European politics, and up to the moment of its extinction half believed that the kingdom would be saved by British interference. The British people, however, cared absolutely nothing about it. They were very sorry their Kings should be Continental rulers, they were very glad when they ceased to hold the double position, and after the separation of the Crowns they declined to think about Hanover at all. When the kingdom was extinguished, they were, on the whole, pleased. It must have been a very bitter pill for the Duke of Cambridge, who never forgot that he stood second in succession to the State ; but no serious word of remonstrance was ever uttered in Parlia- ment, and we never remember to have read a com- plaint, except against the sequestration of George V.'s private fortune. The ex-King, whose title to his territories was ideally perfect, he reigning at once by " right " and by consent, had even among Legitimists no English adherents, and when he died, M. de Rochefoucauld-Bisaccia seemed a more natural mourner at the preliminary funeral ceremony than the Prince of Wales. The Queen issued an order directing mourning to be worn for her cousin, and we are told that in a few London churches the order was obeyed ; but the majority of the people wore entirely indif- ferent, and indeed ignorant that with Prince Ernest's renuncia- tion of the Hanoverian throne a chapter of English history will end. Neither the antiquity of the House of Guelph—an antiquity which so attracted Gibbon that he wrote on it a monograph, now unjustly forgotten—nor the benefits it has accidentally conferred on Great Britain, nor the unrivalled chance of Continental influence which the union of theriowns might have opened, have moved the sensible, stolid, unhistorical islanders to care one jot what became of the English branche =tette. Of all Englishmen of rank, the one who is to Eng- lishmen most shadowy is Prince Ernest of Cumberland, eldest male by German and French law of the English Royal House. We doubt if there are ten men in England who could say what this Prince is like, who ever bought his photograph, or who have the slightest idea why the Hanoverian Minister who wrote "For Sceptre and Crown," holds him in such visible disdain.

So complete, indeed, is the indifference, that we scarcely know why we touch the subject, unless it be from an interest in the little-noticed sides of history, which some of our readers may share with us ; but as we have touched it, we may notice another point, the entire extinction as an effective force of the idea of Legitimacy. George V. had a much better title to Hanover than Henry V. has to France. The line is as old—having

intermarried, Gibbon says, with that of Charlemagne—and though not seated in Hanover for more than five hundred years, it acquired the Duchy rightfully, and has the immense advantage committed no fault. Hanover as a State had refused no not mean that in a society which is both heathen and possibly reasonable concession. There was no proof that the Prince at least almost incapable of the finer affections, these hideous Ernest or the Duke of Cambridge, if called to the throne, would memories and associations will transmit quite the same foul not have signed any treaty necessary to the German Empire, taint that they would in a Christian country. But allow what and have assumed as regards that Empire the attitude of the you will for this, and the prospect is still fearful enough. Kings of Saxony or Bavaria. There was, in fact, no excuse The man who cannot free himself from the memory of such for the bouleversement, except that while Hanover existed unnatural crimes, which will appear to cleave to his very Prussia could not be strong, and that a strong Prussia body as well as his soul, can never lead a quite natural life was essential to the aspirations of the German people ; again, or even transmit to his children, if he should have and that excuse, which would justify any anti-royal them, a nature free from a certain strain of unnatural experience. revolution, seemed to the foremost of German Legitimists It is not a subject to dwell on, but thus much must be said,— amply sufficient. It seems so also to Constitutionalists and that infinitely more important than any attempt to relieve the Republicans, and it was well it should seem so ; but then, if it physical suffering, is the attempt to break here and there is sufficient, where is the logical claim of Sovereigns against through the chain of the unnatural ancestry to which the future subjects ? It is reduced to this,—that if subjects wish a population of the famine-struck provinces seems likely to look throne to disappear, they must have the necessary force to back. For that ancestry, indeed, it can hardly feel anything but bring it to the ground. We do not suppose the Hohenzollerns loathing,—a horror not diminished by the reflection that will ever regret the severe measure dealt out to the Guelphs. nothing can free them from the pollution of such blood in It was necessary to deal it, or to draw back from their appointed their veins. The physical misery of starvation is little, task ; but a day may come when they may recollect it, and compared with the moral misery of a race perpetuated by the doubt whether Louis XIV. did not understand kingcraft when authors of such unnatural crimes, and such hideous sacraments he said, " Sovereigns should stand by one another." They of despair. have learned a higher lesson, but whether it is one which will And money can do so much just now, not merely in preventing equally tend to their own prosperity is a question to be settled death, or crime that is worse than death, but in opening up the new in the future, if it ever arrives, when Germany fulfils Heine's communications, the absence of which is responsible for a great prophecy, and the German Republic is born. It is not the deal of the worst horror. The worst famine is in Shansi, to which farther off because the last Guelph was unattended to his the nearest point available for steamers is Tientsin, the point on grave by representatives of Germany, and was honoured in the Pei-ho occupied by our troops when we were under the England only with an official and perfunctory mourning. necessity of overawing the Government in the neighbouring