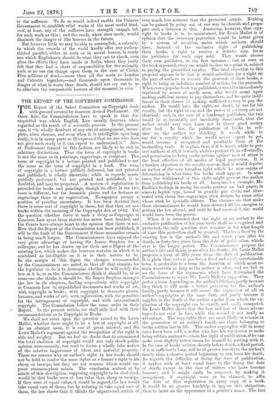 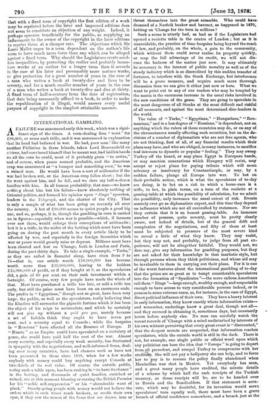 THEREPORT OF THE COPYRIGHT COMMISSION.

THE Report of the Select Committee on Copyright deals with ground covered by fourteen Acts of Parliament. Of these Acts, the Commissioners have to speak in that dis- respectful way which English Law usually deserves, when regarded as the result of a scientific process. In the present

case, it "is wholly destitute of any s6rt of arrangement, incom- plete, often obscure, and even when it is intelligible upon long study, it is in many parts so ill-expressed that no one who does not give such study to it can expect to understand it." Acts of Parliament framed in this fashion are likely to be rich in arbitrary distinctions. Thus the term of copyright in books is not the same as in paintings, engravings, or sculpture. The term of copyright in a lecture printed and published is not the same as the term of copyright in a book. The term of copyright in a lecture publicly delivered, but not printed and published, is wholly uncertain; while as regards music publicly performed, but not printed and published, it is doubtful, and may be perpetual. A system of registration is provided for books and paintings, though its effect in the two cases is different, but for dramatic pieces and for lectures or engravings there is no registration. Newspapers occupy a position of peculiar uncertainty. It has been decided that there is some sort of copyright in them, but that they are not books within the meaning of the Copyright Act of 1842. Yet the question whether there is such a thing as Copyright at Common Law apart from statute has never been decided, and the Courts have always leant to the opinion that there is not. Now that the Report of the Commission has been published, it will be the fault of the Government if these anomalies remain in being much longer. The Commissioners have enjoyed the very great advantage of having Sir James Stephen for a colleague, and he has drawn up for their use a Digest of the existing law, which makes the fourteen statutes in which it is contained as intelligible as it is in their nature to be.

In the margin of this digest the changes recommended by the Commissioners are noted, so that all that remains for the legislator to do is to determine whether he will codify the law as it is, or as the Commissioners think it should be, or as some one else thinks it should be. Sir James Stephen arranges the law in six chapters, dealing respectively with copyright at Common Law in unpublished documents and works of art, with copyright in books ; with copyright in dramatic pieces, lectures, and works of art ; with registration, with the penalties for the infringement of copyright, and with international copyright. The Commission follow the same order in their Report. In the present article, we shall only deal with their recommendations as to Copyright in Books.

We shall not enter upon the question raised by Sir Louis Mallet, whether there ought to be a law of copyright at all. As an abstract issue, it is one of great interest, and Sir Louis Mallet's argument against the recognition of the right is able and weighty. But we feel no doubt that to recommend the total abolition of copyright would not only shock public opinion unnecessarily, but tend to foster a wholly false notion of the relative importance of ideas and material property. There are reasons why an author's right to his books should not be held to confer the same rights as a farmer's right to his sheep or turnips, but they are not reasons which would im- press common-place minds. The conclusion arrived at by minds of this description, supposing copyright to be abolished, would be that books were of less value than sheep or turnips. If they were of equal value, it would be argued, the law would take equal care of them, but by refusing to take equal care of them, the law shows that it thinks the unprotected article of very much less moment than the protected article. Nothing can be gained by going out of our way to cherish and propa- gate such a delusion as this. Assuming, however, that copy- right in books is to be maintained, Sir Louis Mallet is of opinion that the necessary protection would be better given by a system of royalties, under which authors should have, instead of the exclusive right of publishing their books, a right to receive a definite sum fro m the publisher for each copy sold. They would choose their own publisher, in the first instance ; but as soon as the book appeared, every one would be free to reprint it, subject to paying the prescribed royalty. The fatal objection to this proposal appears to be that it would substitute for a right on the part of authors to recover the proceeds of their books, a right to bring an indefinite number of actions for the proceeds. Whenever a popular book was published, it would be immediately reprinted by scores of needy men, who would count upon making sufficient money to pay themselves, and be quite indif- ferent to their chance of making sufficient money to pay the author. He would have the right, no doubt., to sue for his royalty, but the right to sue and the power of recovery are not identical ; and, in the case of a bankrupt publisher, the two would be so invariably and inevitably dissociated, that the author would very soon learn not to throw good money after bad. In fact, the publication of books in reli- ance on the author not thinking it worth while to sue for a royalty which he would never expect to get, would become a recognised and profitable form of the bookselling trade. It is plain that., if it is worth while to pro- tect authors at all, it is worth while to protect them effectually, and permission to bring costly actions against men of straw is the least effective of all modes of legal protection. It is a further objection to the royalty system, that it would deprive an author of the very harmless right which he now enjoys of determining in what form his books shall appear. In some cases, the withdrawal of this right might prevent the author from publishing his books at all. Imagine, for example, Mr. Ruskin's feelings in seeing his works printed on bad paper, in scarcely legible type, bound in gaudily gilt cloth, and illus- trated with cheap line engravings, after designs by some artist whose work he specially abhors. The chances are that under these circumstances he would have devoted all his energies to getting the law altered, and until he had succeeded, the world would have been the poorer. When it is conceded that the right of an author to the exclusive publication of his own books shall be recognised and protected, the only question that remains is for what length of time this protection shall be granted. The term fixed by the existing law is the author's life and seven years after his death, or forty-two years from the date of publication, which- ever is the longer period. The Commissioners propose the author's life and thirty years after his death ; Sir Louis Mallet proposes a term of fifty years from the date of publication.

It is plain that, ccrteris paribus, a fixed and easily ascertainable term is preferable to a term the duration of which must re- main uncertain so long as the author is alive, and we fail to see the force of the arguments which have determined the Commissioners to reject Sir Louis Mallet's suggestion. They prefer a term depending on the author's lifetime, partly because they think it will make a better provision for the author's family, partly because it will secure the expiration of all an author's copyrights at the same date, and partly because it supplies in the death of the author a point from which the ex- piration of the copyright can be exactly and easily computed.

Sir Louis Mallet shows that the first and last of these advan- tages do not exist in fact, while the second is not really an advantage. The copyrights that are most likely to remain in the possession of an author's family are those belonging to books written late in life. The earlier copyrights will in many cases have been sold, a writer who has his reputation to make being seldom anxious to retain the right of publication, if he can make even slightly better terms for himself by parting with it. In the case of books written shortly before death, a fixed period, if it is sufficiently long, will be of greater benefit to the author's family than a shorter period beginning to run from his death.

As regards the difficulty of fixing the date of publication, it applies with at least equal force to the fixing the date of death, except in the case of writers who have become famous ; and it might easily be removed, by making it compulsory, if copyright were to be claimed, to affix the date of first registration to every copy of a book. It would be no greater hardship to impose this obligation, than to insist on the appearance of a printer's name. The fact that with a fixed term of copyright the first edition of a work may be reprinted before the later and improved editions does not seem to constitute an objection of any weight. Indeed, it perhaps operates beneficially for the public, as supplying an inducement to the owner of the copyright in the later editions to reprint them at a cheaper rate. The objections which Sir Louis Mallet urges to a term dependent on the author's life seem to have much more force than any which can be alleged against a fixed term. Why should the Legislature create need- less inequalities, by protecting the earlier and probably imma- ture works of an author for a longer term than it accords in the case of his later and presumably more mature works, or give protection for a great number of years in the case of a man who writes a book at twenty-five and lives to be seventy, and for a much smaller number of years in the case of a man who writes a book at twenty-five and dies at thirty. A fined term of half-a-century from the date of registration, that date being necessarily affixed to a book, in order to make the republication of it illegal, would answer every useful purpose of copyright in the simplest attainable manner.