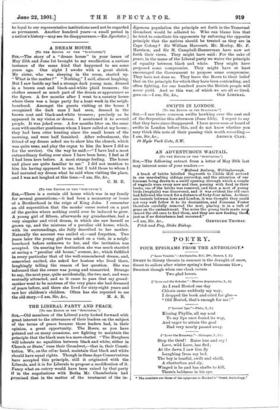 (TO THE EDITOR OF THE "SPECTATOR."]

Sis,—There is a certain old house which was in my family for several generations,—it had been a monastery or home of a Brotherhood in the reign of King John. I remember an old superstition that the monks' curse rested on a part of the garden where nothing could ever be induced to grow. A young girl of fifteen, afterwards my grandmother, had a very singular and vivid dream, in which she saw herself as grown up, and the mistress of a peculiar old house, which, with its surroundings, she fully described to her mother. Naturally the account was smiled at,—and forgotten. Two years later the young girl was asked on a visit, in a neigh- bourhood before unknown to her, and the invitation was accepted. On nearing her destination she was much startled at seeing a "peculiar old house," avenue, &c., which fulfilled in every particular that of the well-remembered dream, and, somewhat excited, she asked her hostess who lived there, laughingly telling the reason of her question. She was informed that the owner was young and unmarried. Strange to say, the next year, quite accidentally, the two met, and were mutually attracted, and so it came to pass that my grand- mother went to be mistress of the very place she had dreamed of years before, and there she lived for sixty-eight years and saw her children's children. Often has she repeated to me the old- story.—I am. Sir, &c., M. A. B.