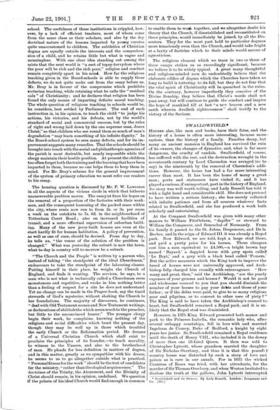 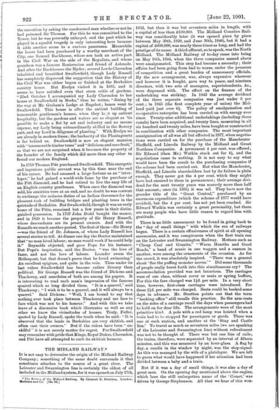 HousEs also, like men and books, have their fates, and the. history of a house is often more interesting, because more-- various, than the history of a family. Families decay, but many an ancient mansion in England has survived the ruin of its owners, the changes of dynasties. and, what is far more - dangerous, the cruelty of vandals. Svndlowfield, of course, has suffered with the rest, and the destruction wrought in the seventeenth century by Lord Clarendon was avenged (so to .. say) in the nineteenth by the removal of Clarendon's addi- tions. However, the house has had a far more interesting career than most. It has been the home of many a great - man ; poets and statesmen have visited it; and it has played a curious, if unimportant, part in the history of England. Its story was well worth telling, and Lady Russell has told it with a light hand and considerable skill. She does not pretend to have written a serious history; she has merely collected with infinite patience and from all sources whatever facts related to Swallowfield, and she has produced a work both scholarly and entertaining.

At the Conquest Swallowfield was given with many other manors to William FitzOsbern, " dapifer " or steward to William the Conqueror, and Seneschal of Normandy. From, his family it passed to the St. Johns, Despencers, and De la Beches, and in the reign of Edward III. it was already a Royal park. Now Edward, we are told, kept a large stud there, and paid a pretty price for his horses. Three chargers. cost him a sum equivalent to E4,500,—a bright brown bay named Bayard,' a dappled horse with grey spots called' Le Bryt,' and a grey with a black head called 'Pomers.' But the active measures which the King took to improve the breed of horses were not universally approved, and Arch- bishop Islip charged him roundly with extravagance. "How many and great, then," said the Archbishop, "are the yearly expenses of your grooms and horses I' Would it not be good ' and wholesome counsel to you that you should diminish the number of your horses to pay your debts and those of your father; or if the debts were paid, to give to so many religious poor and pilgrims, or to convert to other uses of piety " The King is said to have taken the Archbishop's counsel to.. heart, but Swallowfield remained a Royal park, and it is un- likely that the Royal stud was diminished.

However, in 1375 King Edward presented both manor and park to the Princess Isabella, the romantic lady who, after several unhappy courtships, fell in love with and married Ingelram de Courcy, Duke of Bedford, a knight by eight years her junior. So Swallowfield remained a Royal residence until the death of Henry VIII., who included it in the dowry of more than one ill-fated Queen. It then was sold to Christopher Lytcott, whose grandson married the daughter of Sir Nicholas Overbury, and thus it is that this peaceft country house was disturbed by such a story of love and poison as is rare in our annals. For in 1615 the wicked Countess of Essex was tried, with her attendants, for the- murder of Sir Thomas Overbury, and when Weston hesitated to, disclose the truth at the gallows, John Lytcott interrupted.

the execution by asking the condemned man whether or not he had poisoned Sir Thomas. For this he was committed to the Tower, but he was presently enlarged, and the part which he played in a squalid tragedy is only interesting here because it adds another scene to a curious panorama. Meanwhile the house had been purchased by a worthy merchant of the City, one Samuel Backhouse, whose son took an active part in the Civil War on the side of the Royalists, and whose grandson was a famous Rosicrucian and friend of Ashmole. And after the Backhouses the Hydes ; several Lords Clarendon inhabited and beautified Swallowfield, though Lady Russell has completely disproved the suggestion that the History of the Civil War was either begun or finished at the Berkshire county house. But Evelyn -visited it in 1685, and it seems to have satisfied even that stern critic of gardens. " 22nd October I accompanied my Lady Clarendon to her house at Swallowfield in Berks," thus he writes, "dining by the way at Mr. Graham's Lodge at Bagshot ; hence went to Swallowfield. This house is after the antient building of honourable gentlemen's houses, when they ke )t up antient hospitality, but the gardens and waters are as elegant as 'tis possible to make a flat by art and industry and no meane expense, my Lady being extraordinarily skilled in the flowery part, and my Lord in diligence of planting." With Evelyn we are already in modern times ; the barbarity of the Plantagenets is far behind us. Swallowfield is now an elegant mansion with" innumerable timber trees" and "delicious and rare fruit," so that we are not surprised when it becomes the property of the founder of the family which did more than any other to found our modern England.

In 1719 Thomas Pitt purchased Swallowfield. This energetic and ingenious public servant was by this time near the end of his career. Re bad amassed a large fortune as an" inter- loper," he had gained a world-wide fame by the purchase of the Pitt diamond, and he had retired to live the easy life of an English country gentleman. When once the diamond was sold, his anxieties were at an end, and no doubt he was content to exchange the arduous duties of an Indian Governor for the pleasant task of building bridges and planting trees in the quietude of Berkshire. But Swallowfield, though it was an early home of the Pitts, remained but a few years in their distin- guished possession. In 1737 John Dodd bought the manor, .and in 1820 it became the property of Sir Henry Russell, whose descendants are its present owners. And with the Russells we reach another period. The first of them—Sir Henry —was the friend of Dr. Johnson, of whom Lady Russell has .several stories to tell. At dinner one day the Doctor maintained that "no man laved labour; no man would work if he could help it." Reynolds objected, and gave Pope for his instance. But Pope's inspiration, said the Doctor, "was the love of fame, and not the love of labour. Leander swam the Hellespont, but that doesn't prove that he loved swimming." An excellent epigram, and quite in the vein. Thus under its last rulers Swallowfield has become rather literary than political. Sir George Russell was the friend of Dickens and Thackeray, and anecdotes of both are among his papers. It is interesting to read each man's impression of the famous quarrel which so long divided them. "It is a quarrel," said Thackeray ; "I wish it to be a quarrel, and it will always be a quarrel." Said Dickens : "Well, I am bound to say that nothing ever took place between Thackeray and me face to face which was not to his honour." And with this we take leave of a discursive book which illustrates as well as any other we know the vicissitudes of houses. Truly, Fuller, quoted by Lady Russell, spoke the truth when he said : "It is observed that the lands in Berkshire are very skittish, and often east their owners." But if the riders have been " un- skilful " it is not merely matter for regret. For Swallowfield may remember with pride that Kings, Royal Dukes, Clarendon, and Pitt have all attempted to curb its skittish humour.