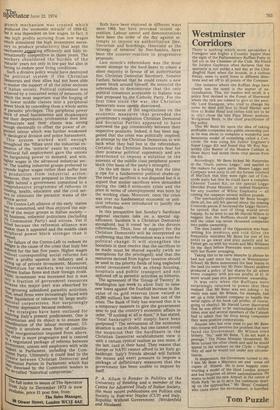 There is nothing which more astonishes a Foreigner and frights a Country Squire than the sight of the Parliamentary Ruffian Party in full cry in the Chamber of the Club. My friend Sir Jocelyn Gaybrace often declares that the spectacle is not unlike a bad day at the Chiddingfold Hunt when the hounds, in a curious frenzy, seem to scent foxes in different direc tions and set off to all points of the Compass. One instance where the Ruffian dogs have clearly lost the scent is the matter of na tionalisation. This, my readers will recall, is a policy first devised in the Forest of Sherwood where the rich are robbed to give to the poor.

• My Lord Stansgate, who tried to change his name by deed poll first to Maid Marian and then to Robin Hood and (when told not to be so silly) chose the title Plain Mister Anthony Wedgwood Benn, is the chief practitioner of the policy.

This Mr Benn hit upon the idea of taking profitable companies into public ownership just as he was about to complete a wonderful and beauteous model of something called a Concorde. He was using his Junior Engineer's• Super Leggo Kit and found that Mr Roy Hattersley (the Bunter of the Shadow Cabinet in those days) had stolen three vital pieces from the Kit.

Accordingly, Mr Benn kicked Mr Hattersley in the "Ouch, yarroo, Leggo," and applied to the makers for spare parts. Messrs Leggo and Company were sorry to tell the former overlord of MinTech that they were right out of Con corde parts but that he could have a complete Channel Tunnel Kit, or the special Leggo Identikit Prime Minister, or indeed blueprints for any number of White Elephants all costing the taxpayer several million pounds. The mechanically-minded Mr Benn bought them all, but still felt peeved about the missing Concorde pieces. If he owned the Leggo factory, he opined, that sort of thing would never happen. So he went to see Mr Harold Wilson to suggest that the Ruffians should take Leggo and the other top seven thousand companies into public ownership.

The then Leader of the Opposition was busy writing his memoirs and told Giles (he frequently mistakes Mr Benn for one of his sons) to go away and play quietly and let Father get on with his words and Mrs Williams (in the days before Peeresses were common) with her flower arranging.

Taking this to be carte blanche (a phrase he had not used since his days at Westminster School) Mr Benn summoned the best brains in the land (to name but Mr Peter Shore) andthey produced a policy of fair shares for all where every company with pre-tax profits of el or more would pass into government ownership.

It was only when the Ruffians were surprisingly returned to power that they realised that Mr Benn was not joking he really was mad. Mr Wilson, for example, had set up a little limited company to handle the serial rights of his book (all profits, of course, going to charity). Mr Harold Lever discovered that he was abour to be nationalised a million times over and several members of the 'Cabinet had to admit that far from being companies they were positive corporations.

Anyone who has ever tried to put Mr Benn into reverse will perceive the problem that now faced the Government. Mr Wilson tried bribery. "No," said Mr Benn, "I do not want a peerage." The Prime Minister threatened. Mr Benn turned the other cheek and said he would appeal to the workers on the Clyde though they all said he would not under any circumstances.

In desperation, the Goverment turned to me. I lent Mr Berm a Meccano set and some old

copies of Wizard. He is now happily constructing a model of the third London Airport and has forgotten all about nationalisation. He wants to build the new Airport in the centre of

". '' Hyde Park "so as to save the commuter snarlup on the approaches. Mr Beau Crosland, who cares about the environment, is horrified.